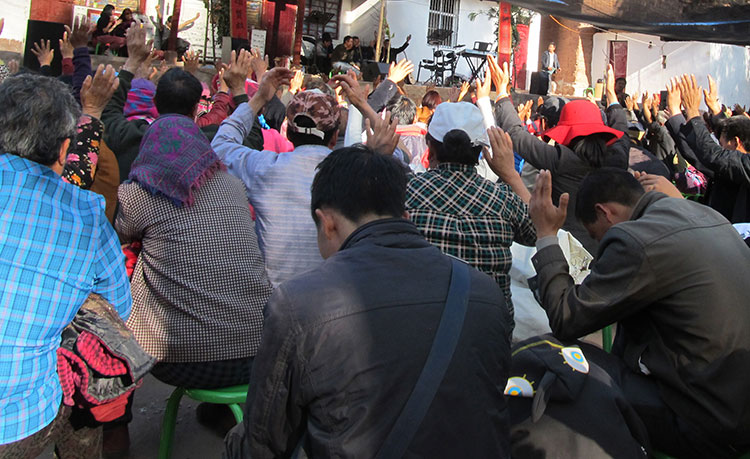 Hundreds of believers gather together for worship and training

In my previous update I told you about how we reached the unreached through various evangelism methods. As promised, this month I will tell you about our discipleship training. It is our goal at Heaven’s Family’s Unreached People Groups Ministry to change minority societies and diminish poverty by calling forth true worshippers of Christ, and then training them to reach their own people.

One such worshipper is Sister Yang, who is actively leading a church planting movement amongst the A-Che people of China. One of the weightier responsibilities Yang faces is teaching and training dozens of new believers about God and His Word. Understandably, Yang regularly calls on Pastor Paul Fang, a Heaven’s Family partner in China, who graciously and frequently travels the 5-hour journey to Yang’s tribe, sharing encouragement and guidance whenever he is needed.

Realizing the incredible need for spiritual wisdom and growth among many new believers like Yang, Pastor Paul arranged for her to recruit as many believers as she possibly could for a training seminar. Although a seemingly effortless task to those of us who enjoy religious freedom, for unreached people groups—living under an oppressive, anti-Christian government and also having to travel remote mountainous regions—it is an incredible and precarious undertaking.

Due to consistent persecution from local officials, many of the believers who attended the training did so covertly, and most of those who responded to Yang’s invitation did so knowing that, when they returned home, they would most likely face ridicule. When all was said and done, believers from 32 minority tribes from all over the province attended this incredible seminar!

In the end, the risk was worth it to everyone as they learned about God and encountered His presence. Biblical forgiveness and the sin of idolatry was taught at the training by Christian tribal leaders in their local dialects and translated by Pastor Paul. Tears of joy were shed as all these tribes, for the very first time, worshipped together in spirit and in truth!

The request for leadership training is by far the most common request we receive from underground church leaders, so providing sound biblical training is at the heart of what we do. Your continued support of the Unreached People Groups Ministry enables us to continue reaching the unreached. Thank you!

Who is this Masked Woman?
What Type of a Thing is a Jesus?