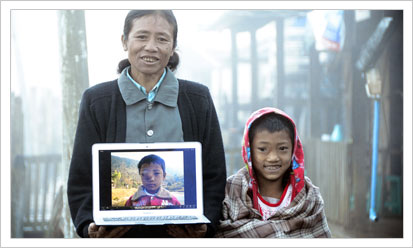 Biak Hlei Par and her mother, Siang Doi, with a photo of Biak from
four years ago

I’m not a big fan of altar calls. They leave people with the false impression that salvation is granted to anyone who comes forward and repeats a prayer. The truth is, however, that salvation is granted to those who believe in the Lord Jesus Christ and repent. When John the Baptist’s convicted audience asked what they should do, John did not invite them forward to repeat a prayer. Rather, he told them, “Let the man who has two coats share with him who has none.” In other words, repent of your selfishness, and demonstrate it. Obedience leads to true assurance of salvation.

Finding myself preaching the gospel for three nights this past November in the city of Hakha, Myanmar, I decided to imitate John’s example, and the Lord helped in a way I hadn’t anticipated. First, however, I need to take you back in time four years to meet a little girl named Biak Hlei Par. Biak lived 60 miles from Hakha in a poor village of subsistence farmers. For two years a tumor had been growing between her right eye and the bridge of her little nose. Her right eye had disappeared behind the bulging tumor, and her angelic little face became horribly disfigured. 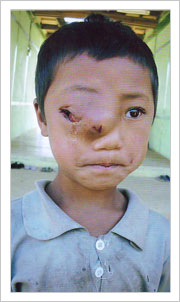 Biak before her surgery

We learned about Biak’s plight from a Hakha orphanage director whose ministry we had been supporting for some time. When he emailed us Biak’s photo (at left), we sent out an appeal for funds to help, and within a few days Biak and her mother were making the difficult 500-mile journey to a Yangon hospital where Biak received surgery that saved her life. Thankfully, the tumor had not penetrated her brain, and we rejoiced when we saw Biak’s post-surgery photos. That was the beginning of Heaven’s Family’sCritical Medical Needs Fund.

Fast forward to this past November. In the few minutes before I was to leave my hotel for the church where I would be preaching the final night of our crusade, I received a knock at my door. To my great surprise and delight, when I opened the door, there stood little Biak and her mother! They had traveled 60 miles by foot and on the back of a motorbike to say thanks. Having never seen anyone with white skin before, 8-year-old Biak was shy at first. When she hesitatingly let me shake her hand, it felt cold as ice from their long journey on high mountain trails and roads. I noticed that Biak was shivering. 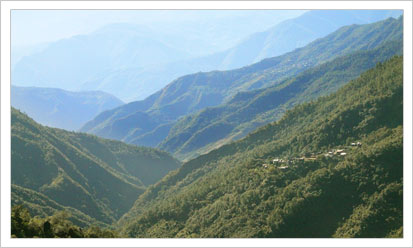 Through my interpreter, I asked Biak’s mother why they were only wearing thin sweaters and not warmer coats. She explained that they wore the warmest clothes they owned. Biak was wearing flip-flops. She didn’t own a pair of shoes.

As we talked, I remembered how I had reminded the crusade crowd the night before—just after we read John’s instructions for those who owned two coats—that there were thousands of very poor people who lived in the many small mountain villages around Hakha who would be shivering that night, especially in the higher elevations. And as I looked at Biak shivering before me, I knew the Lord had sent her to Hakha for a greater purpose than just to thank me.

That night during my sermon, I reminded the capacity crowd of John’s words that we had read the night before, and of my words about the shivering people in the region’s many impoverished villages. Then I asked Biak and her mother to come and stand with me on the platform, where I then told their story. As poor as the people of Hakha are, many were moved to tears when they looked at Biak and her mother in their tattered clothing. Everyone knew what we should do. 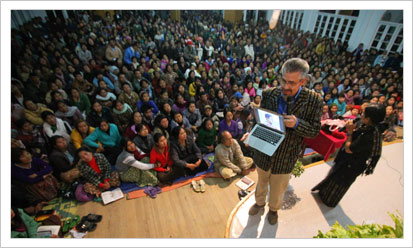 The next morning it was cold enough in Hakha to see our breath, but Biak and her mother were warm inside brand new coats, courtesy of gifts to Heaven’s Family. They also had new coats to take to Biak’s father and older sister. And Biak was the proud owner of a new pair of shoes.

But that is not the end of the story. That same morning, as the angels rejoiced, people started bringing coats to the crusade church, and the pile grew to 870 coats within a few days. True repentance was being witnessed in Hakha. Under the administration of six local pastors, those coats have since been distributed, in the name of Jesus, to the poorest of the poor in 16 villages in the Hakha region, as well as 1 prison. Surely many of the recipients are thanking God for His love expressed through His caring family. 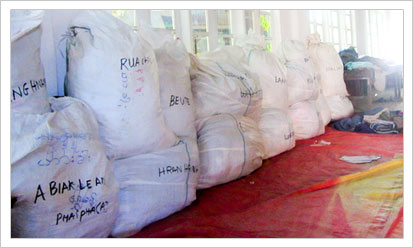 As this story illustrates, there is no conflict between preaching the gospel and doing “humanitarian” work. In fact, preaching the gospel without caring for the “least of these” amounts to a public denial of the gospel. Your gifts to the Critical Medical Needs Fundhelps the world believe as they witness the love that true believers have for the members of their spiritual family.