A Beautiful Place with a Terrible Secret

How can a business protect women and children from trafficking? 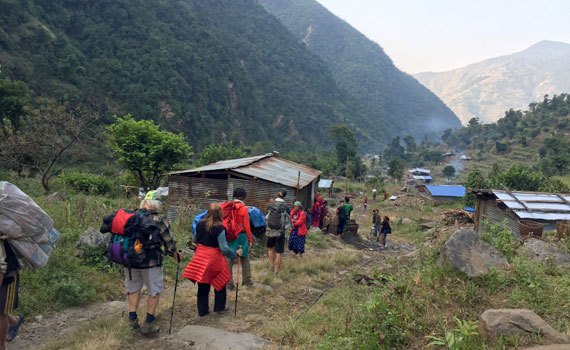 “They had no women,” Mark told me and my wife Karin, to our disbelief. “Majuwa Village was so poor they sold their women and children to sex traffickers,” he explained further. As directors of the Human Trafficking & Slavery Ministry, Karin and I were learning much about how young women become victims here in Nepal, a small Asian nation sandwiched between India and China.

Although shocked to hear about Majuwa (name changed for security reasons), a beautiful mountain village with a terrible secret, we were intrigued to then learn how our partner helped halt the evil practice that threatened the community’s very existence.

As is common in most rural villages throughout the developing world, the residents of Majuwa were shackled by poverty and its twin, hopelessness. Survival teetered on the edge of catastrophe; life and death often seemed determined by a flip of the coin. Such is the economic context where the enslavement of women and children in the sex industry—or abusive, often deadly factory work—is somehow justified.

Unbeknownst to the people of Majuwa Village, however, a glimmer of hope waited just beyond the horizon.

Nepal’s economy is fueled by adventure tourists from Western nations (such as Mt. Everest climbers), so a few years back Mark and his team figured out a way to lift the economy of Majuwa Village so that they would no longer feel desperate enough to sell their women and children.

The team had already been planning to start an adventure-based tourism business to help fund their human trafficking prevention ministry, so they decided on a joint strategy that would also help Majuwa (and other villages like it). That strategy included the creation of “home-stay” businesses, a Nepali version of a bed and breakfast which was successful in other villages. In a home-stay, hikers could rest and enjoy local food, hospitality and culture.

Mark’s team brought news of their idea to Majuwa’s elders, and they were welcomed with open arms. To make the plan work, they helped villagers customize their homes to accommodate overnight guests and make them generally more inviting—a place hikers from Europe, Australia, America and other nations would want to spend their money! Now all the team had to do was create a hiking route that would purposefully bring the tourism to Majuwa.

To everyone’s delight the plan worked! The village economy began to improve as more tourists came through, and the elders were pleased. Once the village’s economy reached a certain point they stopped selling their women and children. The villagers also told traffickers they were no longer welcome in Majuwa.

Majuwa’s ethical home-stay businesses thrived—that is until last year’s quake devastated many homes, and the nation’s tourist business. The people of Majuwa were discouraged, but now that they had tasted hope they turned their eyes to rebuilding. That’s when Heaven’s Family stepped in to fund the reconstruction of a community center, providing a place for meetings and social gatherings that will help strengthen the entire village. This center and the rebuilt homes in Majuwa represent not just shelter and warmth, but also self-esteem, income independence, sustainability, and a hope-filled future!

A refreshing sight: students studying in Majuwa Village (at left) and playing outside their makeshift school (at right, showing what is left of their former building after the earthquake last year caused its collapse)

In addition to preventing women and children from becoming victims of trafficking, Mark’s team is reaching Majuwa with the gospel of Jesus Christ. Most Nepali are Hindus who also hold to a mix of Buddhism and animism, and cannot be won easily through words alone. But projects like this open doors that allow the love of Jesus to penetrate hard hearts, and provide opportunities to tell others about Him.

Majuwa has a new secret, one that is spreading: Jesus, through the hands and feet of Mark and his team and the support of those who have generously given to help rebuild, is now showing up at the home-stays, too.

At left, a Majuwa family standing in front of the home being constructed to replace the one they lost in the earthquake; at right, a villager attaching metal roof sheets to a new building

We’re excited about new doors of opportunity God has opened for the Human Trafficking & Slavery Ministry to help end trafficking in Nepal. Although we’ll always be seeking to help those who’ve become tragic victims of human trafficking and slavery, we know that preventing the horrible emotional, physical and spiritual scars in the first place is the best solution for those most at risk. In addition to our work in Nepal, we also fight this scourge in Cambodia, Haiti, Mexico, the Philippines and Thailand. We hope many more will join us in this battle—each life is worth it!