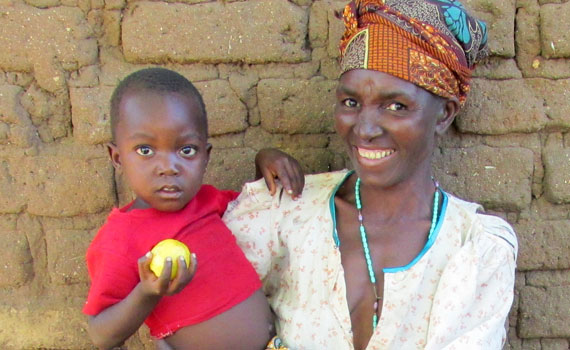 How can a widow feed her 8 children on so little land?

Widowed and then abandoned by several partners, Gloria Joseph is a single mother with eight children. She has long known the pain of poverty, hunger and despair. Gloria farms a half-acre plot and does whatever she can to survive in her remote home village in Malawi.

Gloria began to notice that her neighbors were growing lush, vibrant fields, while hers looked dwarfed and even sickly. That’s because they had recently implemented their knowledge of Farming God’s Way techniques. So Gloria decided to attend the next God’s Love [discipleship] Group meeting in her village, which she had heard was part of the success of her prospering neighbors, to find out more.

The warmth and love Gloria’s neighbors freely offered her took the widow by surprise. She began attending regularly, and she heard many Bible lessons and testimonies about how Jesus loves and cares for all of them—even her. Quite naturally, Gloria was drawn to the real Jesus who lives in the midst of these poor Malawian farmers. Without hesitation, Gloria repented of her sinful past and gladly decided to follow Jesus no matter the cost.

Gloria continues to fellowship with her new God’s Love Group family, and participated in her village’s Farming God’s Way planting almost a year ago.

Along with tens of thousands of other poor farmers, however, Gloria’s field was destroyed by massive flooding last January. But thanks to assistance from Farming God’s Way Ministry and the techniques she learned, Gloria was able to plant her field again last summer (out of season) and is now reaping a harvest. This time Gloria and her eight children won’t have to go hungry!

Thank you for your prayerful support and God bless you,