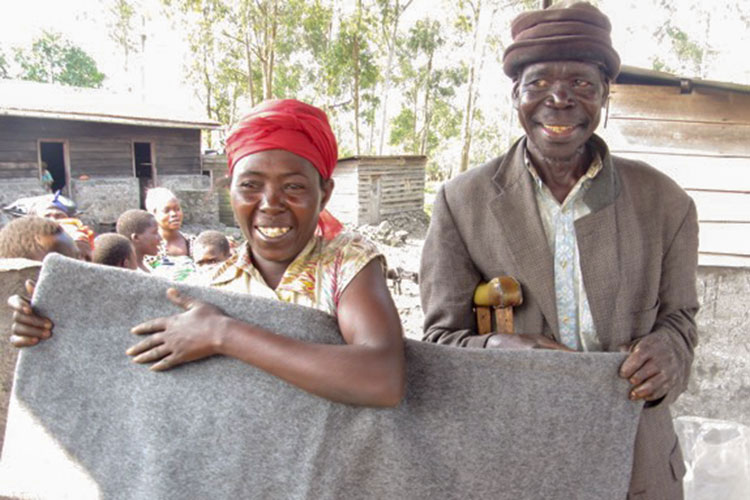 This leprosy-affected family is happy to receive a new blanket

Have you ever tried to rest on a bed of hardened lava flow?

Imagine trying to do so with sores and ulcers from leprosy on your ravaged limbs. That has been the plight of 68 leprosy-affected family members living in Mugunga 3 Camp outside the city of Goma, DR Congo.

These internally displaced people (commonly called IDPs) have fled to the camp’s relative safety after their Massisi villages in the northeastern Kivu area have become a battleground for the ongoing Congolese war between savage militias. But in the midst of all the confusion and deprivation, it is the leprosy-affected families who find themselves—once again—at the very bottom of the proverbial “pole” when it comes to those suffering from the agonies of war and displacement. In the desperate competition for food and items of survival, they are considered by the other IDPs as unworthy of investment.

Early last summer the Leprosy Ministry began providing food and blankets through Simeon Muhunga and his chaplains from Goma. When they first went to the camp and met the leprosy families, they were astounded at the destitution and ostracization these people were experiencing from the other camp members.

Simeon returned to his family and other staff members, who live marginally themselves, and pleaded that they give any extra clothing, kitchen utensils or any of the basics of survival with which to help the people he’d met in the camp. He also told me of how they were sleeping on the abrasive lava rock left by the Nyiragongo Volcano eruption in 2002. At that time I posted the need for them to receive new mattresses, and within a week that need was met! I then quickly sent the funds to Simeon to bring a measure of relief to their suffering bodies—and souls, for this kindness spoke volumes to them. Now, thanks to you, dear donors, they truly have a “place to lay their weary heads.”

At left, Simeon & Josephine Muhunga (our ministry partners, at center) with staff, about to distribute mattresses; at right, leprosy-affected families at Mugunga 3 IDP Camp outside of Goma, DR Congo receiving much-appreciated gifts

I am so grateful for the quick response to this need. These “least of these” have been so moved by the compassionate concern of their “heavenly family” around the world.