A Rope in a Pit 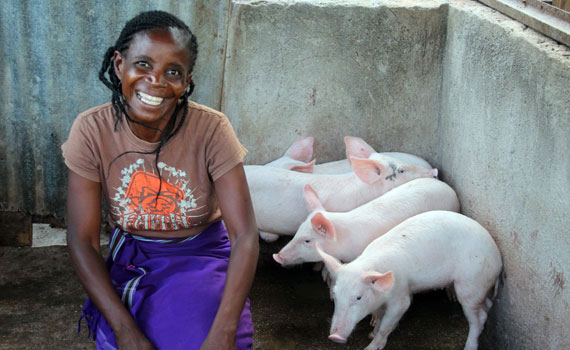 I once heard a proverb that went something like this: “A man fell into a deep pit and called out, ‘Please, someone bring me food and water!’ A passerby heard the man’s voice and replied, ‘I will bring you food and water.’ For a year the kind person sustained that man’s life. But then his benefactor disappeared. The man in the pit cried out again, ‘Please someone, bring me food and water!’ Another passerby stopped to help. ‘Food and water I do not have,’ he said, ‘but I’ll give you what I do have.’ The passerby pulled out a rope, lowered it into the pit, and helped the man climb out. The starving man left the pit and went to buy his own food and water.”

Susan Kamutepfa was just like that man. She once lived a happy, contented life as a wife and mother of four in Mutare, Zimbabwe. Her husband was a good provider. That is, until he died unexpectedly, leaving Susan suddenly deep in a desperate “pit” of poverty, unable to provide the most basic needs of her children such as food, school tuition and rent for their small home.

Thankfully, she knew of a man named Watson Mlambo, a Heaven’s Family partner who operated a Micro-Loan Ministry micro-bank in Mutare. Susan was offered her first “rope” when he told her about a group he helped lead that might offer her some hope, so she began attending their weekly meetings. Called a God’s Love Group (GLG), it provided discipleship, support and training to help members escape dire poverty and dependence by learning to successfully run their own businesses. “While in this difficult situation,” Susan told us, “I joined a…God’s Love Group. Then doors of opportunity started to open for me. The teaching and the fellowship in the GLG were sources of encouragement.”

Susan’s GLG then offered her another rope: her first micro-loan. Susan started two businesses, but despite her best efforts both eventually failed. Discouraged but not willing to give up, Susan attended a small business training offered through Heaven’s Family a couple years later, and she faithfully continued attending her group’s meetings each week.

Susan then discovered her business opportunity: raising pigs. It was a business traditionally dominated by men, but Susan felt God was on her side. So despite two business failures and attempting a third that ran against the grain of her culture, she took a leap of faith backed up by hard work.

And she succeeded. Susan wrote, “I believe ‘all things work together for good…,’ for from the lessons of the first two projects was born the current successful piggery project.” Susan’s business is now thriving, and people in her community are taking notice that a woman, to their astonishment, is skilled at performing all the duties of the business. Some of her neighbors were so impressed with Susan’s piggery that she was invited to be the guest of honor at a local graduation to encourage parents to begin their own businesses.

When Susan found herself at the podium and heard her own voice addressing the crowd, she could hardly believe her ears. “It was like a dream. I realized it was the Lord’s doing.”

Susan went on to say, “I can now testify that the micro-loan I received opened opportunities for me to be noticed and to be of value to the community. I will continue to encourage many women, widowed and left helpless; to see that with God it is possible to rise from the ‘pit’ to a level of dignity in society. I will work hard to expand my project for I now believe, ‘I can do all things through Christ who strengthens me’ Philippians 4:13.”

All that for the price of a rope.

Isaac Smoak (the author of this article) is the newest member of the Heaven’s Family Micro-Loan Ministry team. Isaac brings many gifts and talents that are vital to our efforts, as well as a kindred heart that seeks to serve and make disciples through Christ-centered micro-banking and small business training. Continued rapid growth has driven the need for Isaac’s help, as we have grown to over 80 micro-banks in 12 countries. We have just completed a 30-day trip to Kenya, Uganda and Zimbabwe with Isaac; regions that will now be his responsibility. Welcome aboard, Isaac!