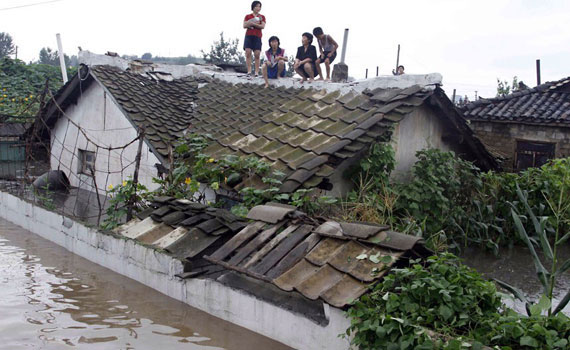 I wanted to make you aware of an urgent situation inside North Korea that most major news agencies are not covering. Two weeks ago a monsoon struck the Northern portion of the Korean peninsula. The storm has caused horrific damage to the small cities and farming villages in the area. Initial reports indicate that at least 40 have died and 11,000 were displaced from mudslides, building collapses, and drownings. Click here to watch an undercover video that was shot and smuggled out showing some of the damage (North Korean officials do not want you to see this).

Providentially, Heaven’s Family works with an undercover missionary in one of the worst hit areas. Our missionary partner was able to convey the severity of the situation from the Chinese border, alerting us to the emergency needs. She told us, “Local families are looking at the fields of rice they’ve been tending for months, only to see a rushing river or lake where their livelihood was seen just days ago. There is a desperate need for rice, cooking oil, and basic living supplies such as clothing.”

Heaven’s Family usually reserves our emergency aid projects for the underground church, but this disaster has opened an unprecedented opportunity for evangelistic outreach. As I write this, our missionary friend is developing a survival kit that will include basic clothing items like underwear and socks, rice and ramen noodles, toiletries, and even medicine—and most importantly, the message of hope that can be found in Jesus.

This is an exciting opportunity that you can get involved with. Each kit can be assembled and distributed for just $25. Many kits are needed (our missionary indicates that an onsite team can distribute thousands), but if each of us chipped in to buy one, two…or more, we could easily meet the need. My wife and I have already begun purchasing some on behalf of our family. Would you join us—before this window closes?

Thank you for bringing hope,