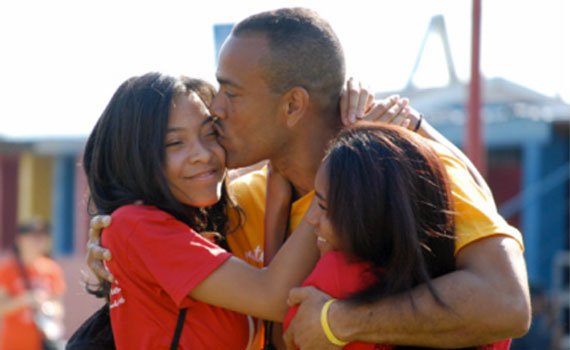 These young girls need their daddy!

Is it too late for a father in prison to reach his children?

The men waited anxiously. Many had not slept much the night before.

As they were ushered into the chapel of Coffield Prison, a rush of tearful embraces marked the beginning of a very special day—a day they would be united with their children for a day of fun and fellowship…and a day many would have to right some wrongs.

This Day with Dads was a culmination of these incarcerated fathers attending the Malachi Dads program every Sunday night for over a year. During that time, they diligently learned how to better love and disciple their children from prison. By studying biblical principles on how to be a man of integrity before God, their roles as fathers and husbands were explored in ways never before experienced before their imprisonment. The majority of these men had become born again as a result of prison ministry, so this was indeed a major journey of commitment and growth for them.

One of the main objectives of the Malachi Dads program is to reconnect the hearts of inmates with the hearts of their children—many with whom they have little contact due to neglect or offense. Weekly writing of letters was encouraged, as well as phone calls or visitations, when possible.

The fruit soon arrived: sweet letters from their children, and responses from spouses or caregivers about the change of heart they witnessed in them. Testimonies followed.

One inmate received a letter from his 12-year-old daughter that expressed the intense yearning she and her two brothers felt about being reunited with their father. They couldn’t come for the Day with Dads event, however, due to distance and meager finances. But the Lord heard their cry, and made a way through the Prison Ministry & Rehab Fund to make the journey with their mother. Their reunion that day—the first in 4 years, and the first since he had met Jesus—was joyous! Their mother confessed, “There are no words to describe the amazing changes that have taken place in my husband—he is a totally different man!”

Thank you all so much for everything you have done in working with us, and making Malachi Dads become a reality. My family, and my sons thank you. We had a great time and it is something I will always remember. It has brought me and my family back together and brought my kids closer to Jesus. My son asked me about the resolution I had made to be a godly father, and what it meant because he didn’t understand it. So he had me walk [with him] up to the front of the church and sit on the altar steps and explain it to him. I could see the Holy Spirit working in him and it brought both of us to tears. I will never forget it.

Your contributions to the Prison Ministry & Rehab Fund have helped these men make commitments to be the fathers God made them to be. Their children have been reunited with the hearts of their fathers, and shown the way to a life of service to the Lord.

May God richly bless you!

What Comes Next
A Dream Coming True