Abandoned by Country, Remembered by Christians

Abandoned by Country, Remembered by Christians 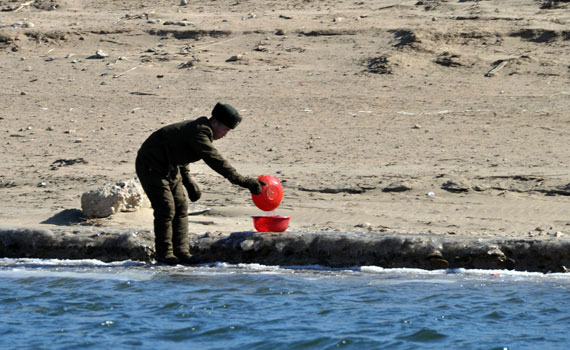 A North Korean guard gathers water from a frozen river bank. Guards are some of the most privileged in the country, yet even they face malnutrition like most of their fellow citizens.

Eli walked home, head and shoulders drooped in despair. The North Korean government, headed by a man-deity whom Eli was lead to believe would always provide, had abandoned him in his time of greatest need. Looking at his military uniform, worn from years of faithful service, Eli wondered if it really had been all for nothing.

Every able-bodied North Korean young man or woman is required by law to serve for at least 3 years in the military upon graduating high school. A few years into Eli’s service, a routine examine revealed that his liver was failing. As a member of the privileged military class, Eli had been one of the first to be provided with available food. Even with this privilege, however, limited resources and the resulting malnutrition had taken its toll. Instead of providing medical help, the government had discharged Eli and sent him home.

Although his country had abandoned him, Jesus was still keeping careful watch over the young man. Unbeknownst to Eli, his Uncle Stephen and Aunt Rebecca had learned of his desperate situation and had determined to intervene. Stephen and Rebecca are members of a secret underground church inside North Korea and part of a growing network of believers Heaven’s Family supports through covert aid distributions.

When the couple arrived at their nephew’s home with a month’s supply of food, Eli was overwhelmed. But there was more his uncle and aunt wanted to share. Knowing that it would be Eli’s duty to turn them into the authorities, Steven and Rebecca took great risk and told him their story. They had also faced starvation, but because of Christian neighbors reaching out to them with aid and the gospel message, they now knew the True Provider. His name was Jesus.

As a supporter of the North Korean Christians Fund, you provided Steven and Rebecca with tools to share a tangible example of Christ’s love for their nephew. Eli is now part of Heaven’s Family’s aid network but faces a downhill battle with his health. He needs our prayers. Yet even in the face of death, this young man’s despair has turned to an Eternal Hope that will never abandon him.