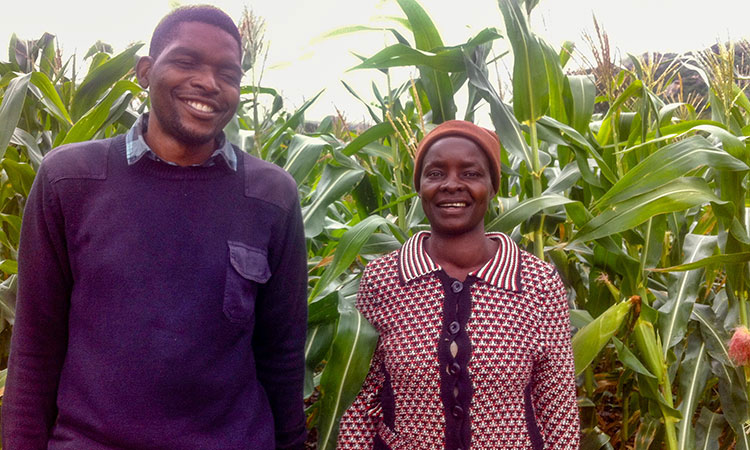 Brother Oni, a Farming God’s Way trainer, with one of his many successful students, Diane

Our investments continue to bear much fruit!

If you ever ask yourself questions like, Where are my hard-earned dollars going? Or What kingdom work is being accomplished through Heaven’s Family and Farming God’s Way? What kind of return on my investment will I receive when I meet King Jesus? …then read on!

I want to share with you a report I received last week from Onifaro (Oni) Mususa, one of our Farming God’s Way trainers from Zimbabwe.

This month I travelled to Dora Community first. In Dora I did a discipleship training with eight aspiring/potential FGW disciples. Next I visited four villages in Dora for monitoring ‘their fields‘ and mentoring purposes. Each village has about 25 to 30 families. I also met with God’s Love Group leaders to brainstorming on how we can impact our community. Then I travelled to Honde Valley/Hauna and did field layout and preparation in four different fields of the deaf community…

The main highlight of this month is a story of a 48 year old woman named Diana Mukodza. Diana demarcated her field. On one side she is practicing Farming God’s Way and on the other side her mother is still practicing conventional agriculture (CA). In both fields she planted maize [corn]. She planted the CA field first and then the FGW field was planted two weeks later.

The rains were normal after planting in Nov 2018 till the first week of Jan 2019. Then for five weeks the rains were erratic and we had a dry spell till the 15th of Feb 2019. The maize that was planted first (CA) was overtaken by the FGW maize that was planted two weeks after. This prolonged dry spell has hit the province leaving [the CA crops of] Diana’s mother and neighbours suffering from severe moisture stress which made it wilt at a height of about 75 cm [30 inches] as seen from the two contrasting images. The FGW maize is now about 1.9 metres [75 inches] high and very healthy.

Some neighbours are now registering for food aid from the government and NGOs since their crops are a complete failure. But Diana is expecting a bumper harvest (enough food to feed her family through the next harvest plus excess to sale or share) from her FGW field with no need of food aid. Her testimony field has caused six people to want to join and register for FGW training.

Needless to say, Diana’s results are exceeding the expectations of those in her community, who view all “new” ideas with suspicion. And Diana’s faith, which caused her to step out and try FGW, is being abundantly rewarded! I hope your faith, which you too stepped out in to give life-giving chances to poor brothers and sisters in Africa, is also being abundantly rewarded—in joy now, and eternal blessing in the life to come.

See Oni’s photo below, showing him standing with Diana in her mother’s anemic conventional agriculture crop, and her Farming God’s Way bumper crop in the background to the left… 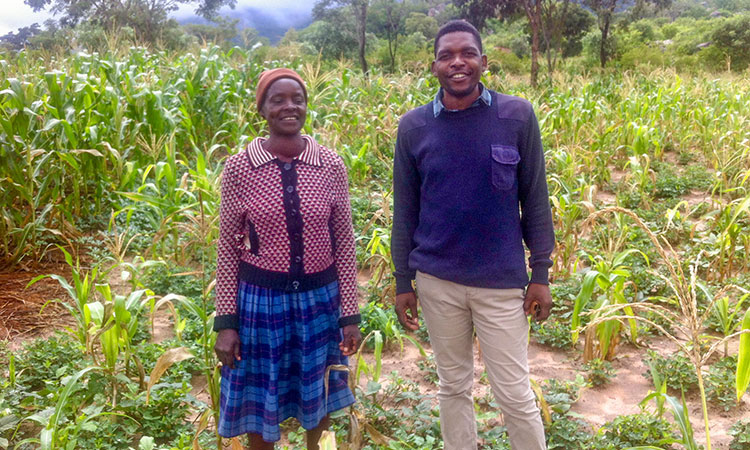 Want to do more?

Brother Oni is one of the 10 Farming God’s Way trainers we’re working with in 5 African countries. It is because of your consistent support that our trainers are able to travel to bless poor farmers in rural areas with the information and training they need to produce bumper harvests.

If you would like to personally sponsor one of our trainers, Brother Oni is a great one to start with. But hurry, the word is now out!

May the LORD richly bless you for partnering with us in kingdom advancement and helping to feed the “least of these.”

The Superheroes of Baluwa
Chasing Hunger and Poverty