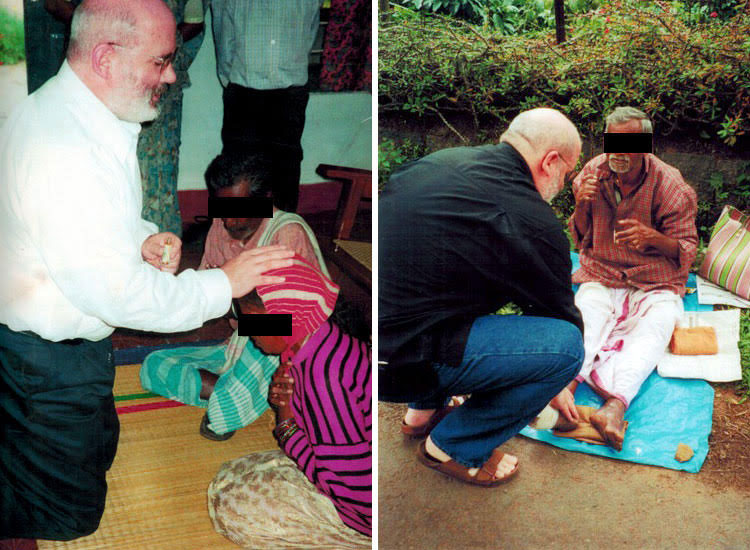 Friend of the “outcast”: Don Riker caring for leprosy patients in South India

The following is the testimony of Don Riker, a dear brother and colaborer in the fight against leprosy and its social stigmas. His words are a powerful testimony to the determination of a man of God who sacrificed his health for the “least of these.”

“Do you remember what we were looking to rule out when we did the sural nerve biopsy three weeks ago?”

“Well,” the doctor on the telephone said, “much to our surprise, the result is positive. The bacterium was identified in the nerve sample and it is 100% conclusive. You have Hansen’s disease [leprosy].”

Our world was literally shaken on that afternoon in October 2013. One and a half years earlier, I had experienced a sudden onset of peripheral neuropathy. My extremities felt like they were burning in oil. Over the previous 21 months, my wife Cindy and I had spent many hours in doctors’ offices where I was given a number of tentative diagnoses, none of which explained what was happening to me.

As I hung up the phone, my mind immediately flashed back to the very first time I met a person with leprosy in South India. The old man sat on a blanket at the side of the road with a smile upon his face and a cross around his neck. Several fingers were missing and he had open wounds on his legs and feet. Just before I anointed him with oil and laid my hands upon him in prayer, I quickly told the Lord, “I’m trusting You to protect me as I minister to him in Your name.”

How could this happen? What does this mean for me and for Cindy and our four children? Will they get this disease from me? Questions swirled as I felt the weight of the stigma associated with leprosy and thought about telling Cindy about that brief, life-changing phone call. In that moment, I heard the Lord saying to me, “Don, you could trust Me to protect you from it. Will you trust Me with it?” I immediately understood the Lord was inviting us to go with Him on a journey I never would have chosen.

It had been my privilege to serve and train tribal pastors in South India for a number of years. I visited the same group of people two to three times a year for ten days to two weeks. One of those pastors had leprosy. I also visited and ministered to groups of people with the disease who lived in colonies. The Lord gave me His heart for all of the dear people whom I was privileged to serve.

Our journey with neuritic leprosy (without typical skin lesions) has been a difficult but rich one as the Lord has led us every step of the way. Although I still have the neuropathy and have experienced other types of nerve damage, we have grown much as disciples of Jesus. My prayer is that I will be able to return to India some day.

We thank the Lord for the Leprosy Ministry of Heaven’s Family, which meets the practical and spiritual needs of those suffering from this disease in nations that do not have the kind of health care that is available to us [westerners].

But it doesn’t stand a chance when we unite against it.

Your compassion and generosity are bringing love and hope to those who’ve been dubbed outcasts by their society because of the effects of leprosy. You’re also helping to fund immediate medical treatments and groundbreaking research into more advanced leprosy treatments.

Thank you for helping to take the fight to the front lines. Together, we’re battling leprosy and its social stigmas just as aggressively as the disease attacks its victims.

Don’s testimony is a shining, inspiring example of the selfless devotion of the dedicated workers on the front lines. Please pray for Don. Our job will not be done until every leprosy victim has found healing and hope in our risen Savior.

Your sister in Christ,

Remembering
Not Sleeping on Lava