The Micro-Loan and Village Development Funds at Work in Myanmar 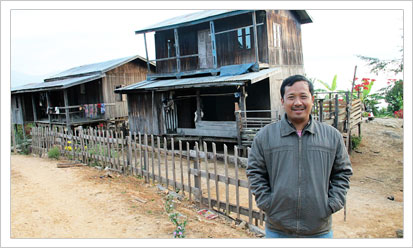 Lalchhuan Mawia, who administrates Heaven’s Family’s loans to Zatual
and other villages in Myanmar, standing before a typical house in
Zatual Village

The edible part of the plant, the underground tuber, is high in fiber, low in fat, a rich source of essential fatty acids, and is loaded with potassium, magnesium, phosphorous, and Vitamins C and B6. Scientific tests have indicated antibacterial, anti-mycobacterial, antiviral, anti-inflammatory and analgesic properties. Uncooked, however, elephant foot yams are toxic, and if eaten, will make your mouth, tongue and throat feel as if hundreds of small needles are digging into them. Wow.

The plant flowers for just five days and, for a few hours during that blooming, it releases an aroma of rotting flesh (hence the name stink lily) along with some heat, an ingenious means that God devised to attract carrion-eating flies that unwittingly pollinate it. 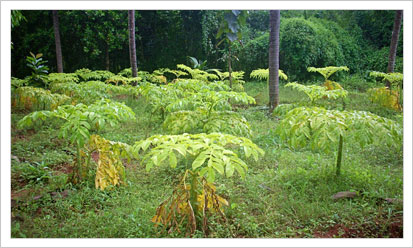 I first learned about this special plant in November during my visit to remote Zatual Village in Chin State, Myanmar, where elephant foot yam is helping poor believers lift themselves from poverty.

Early last year we gave small loans that averaged $120 to each of the 38 families in Zatual. Most planted some kind of cash crop, such as tomatoes and turmeric, or raised piglets. But it seems that those who planted elephant foot yam have seen the greatest return on their investment, as their tubers, once diced and dried, are finding demand from as far away as China, where it is used for medicinal purposes.

In the past year, Zatual has enjoyed an agricultural renaissance and economic boom of sorts, all because of 38 little loans and some willingness to take a risk. For as long as anyone can remember, the people of Zatual have primarily grown rice on the mountains that surround their village, most of which they consumed as subsistence farmers. To grow that rice, jungles had to be slashed and burned, but the new rice fields were only useable for one year due to weeds and grasses that compete with small rice plants. So new land had to be cleared every year. It was a back-breaking means of survival.

But last year, Zatualians didn’t grow any rice—they purchased what they needed using their business profits. And the cash crops they are now cultivating can be grown on the same land year after year, because vegetable plants such as elephant foot yam tolerate weeds.

Elephant foot yam can be harvested as early as 8 months after planting, but the longer one waits, the bigger the yams grow. It’s like having money in the bank that keeps earning interest. (Talk about a “cash crop”!) We’re now helping Zatual’s elephant foot yam farmers improve their soil in hopes that they’ll eventually be growing yams that weigh as much as 30 pounds! 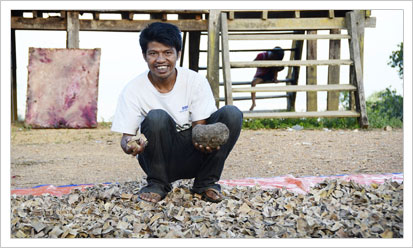 He is an international exporter from the little mountain village of Zatual.
He is holding the raw yam product in his left hand, and in his right hand
(as well as surrounding him at his feet), the chopped and dried version
sold in the market.

Micro-loans may well be the best means to help the poor lift themselves from poverty. They are certainly working in Zatual and in many other places where Heaven’s Family is establishing micro-banks. One proof of Zatual’s prosperity are the 13 motor scooters that are now owned by Zatual families—11 more than when I visited the year before!