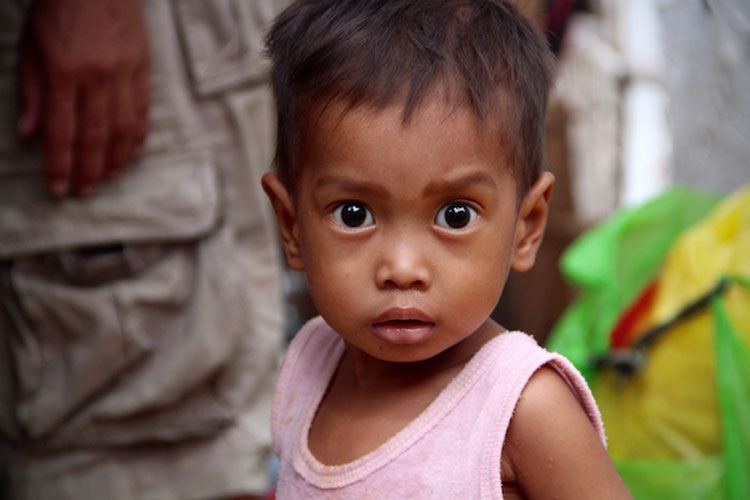 A little boy with very big eyes who lives at Isla Verde, a coastal Philippine slum that almost defies imagination

In August of 1983, at the age of 15, Joseph Zanetti walked forward during an evangelistic crusade in his hometown in North Carolina and “invited Jesus into his heart.” The trouble was, although what Joseph did was common in the Bible Belt, it was foreign to the Bible.

According to the New Testament, people are born again when they repent and believe in the Lord Jesus. Joseph did neither. And so his “new life” bore no fruit of salvation. In fact, for the next 28 years, Joseph’s life was characterized by partying, drunkenness and womanizing—sins that the Bible declares are practiced by those who will not inherit God’s kingdom. Yet in the ensuing 28 years of attending various churches, Joseph was never warned that he was on the broad road to destruction, but always “assured of his salvation” because he had “prayed the prayer.” He knew that if he died, he’d be in heaven.

In 2011, Joseph journeyed for a month to Davao City, in the Philippines, to meet a Filipina women whom he’d met on a Christian dating internet site. During all four Sundays of Joseph’s visit, they attended church together, after which Joseph always did the Christian thing by giving 5-peso coins (worth about 10 cents) to each of a small group of beggars who strategically stationed themselves right outside the church building.

But on the fourth and final Sunday of Joseph’s visit, three of those beggars, all young girls, kept following him and his girlfriend as they walked to lunch after church. And they continued begging, asking for more money. Joseph did his best to ignore them even as they persisted. But then one tugged on his clean shirt with her dirty hand, and that was too much for him. “Get your dirty hands off me!” he yelled. “I’ve already given you money! Go away!”

Joseph never imagined what was about to happen.

The oldest of the three girls collected Joseph’s coins from her two friends, added them to her coin, and then handed all three back to Joseph. He accepted the penitent refund, but as he did, one of the coins slipped through his fingers, falling into a mud puddle. Joseph reached down to fish it out, dirtying both of his hands in the process of recovering a coin worth 10 cents. It made him even angrier. But the next 30 seconds changed the course of his life. The girl who returned the three coins searched for a clean spot on her dirty dress sash, and when she found one, proceeded to use it to carefully wipe the mud from Joseph’s dirtied hands, finger by finger. Then she looked up at him and smiled.

Joseph said it was like being hit by a train, and he suddenly realized that he had been deceiving himself for 28 years. The grace of an impoverished child had exposed his selfish heart. Joseph returned to his rented room and with tears repented, believed, and was transformed. And that was the beginning of a new life in Christ.

Joseph returned to the U.S. and found himself lying awake at night thinking about the children he’d met. He already knew that Davao’s child beggars were members of a marginalized, illiterate, stateless group of people known as the Badjao, sometimes referred to as Sea Gypsies. Joseph learned all he could about the Badjao people. Two months later, after selling everything he owned, he returned to Davao, with the intention of serving the children who opened his eyes.

Unsurprisingly, he found them begging at the same church on Sunday. This time, however, instead of giving them money, he took them to a fast-food restaurant for lunch, doing his best to communicate with them, as the children spoke just a few words of English.

Word of Joseph’s kindness spread. Within a few weeks, he was feeding 75 Badjao children fast-food chicken every Sunday afternoon.

Joseph asked one of the three original beggar girls, named Carmina, if he could visit her family. She took him to meet her parents, 8 siblings, and her numerous relatives, who all lived in a slum named Isla Verde. Joseph’s visit shocked him.

Isla Verde is a community of crowded one-room bamboo shacks that are perched on stilts. Underneath them is knee-deep water that is so covered with floating garbage that the water surface can’t be seen. Toilets are nonexistent. People relieve themselves through floor holes onto the floating garbage below. Millions of flies feed on the flotsam. There are only four public water faucets that serve 1,200 people. The Badjao survive by fishing, selling used shoes, trinkets, and some, by begging in downtown Davao.

Joseph started strategizing and spending his money to serve the Badjao. I’ll tell you more of his story in my next blog. But the biggest current challenge is that the slum where the Badjao have lived for decades is about to be razed to make way for a billion-dollar waterfront development project. The Badjao, being stateless non-citizens, will receive no compensation for their loss. I’m hoping that we can help the 44 families, all from Carmina’s clan, whom Joseph has been serving for the past 5 years.

Below are some photos I took while visiting Isla Verde today, with captions, to give you an idea of what life is like there. I think it will be worth your time to take a look. 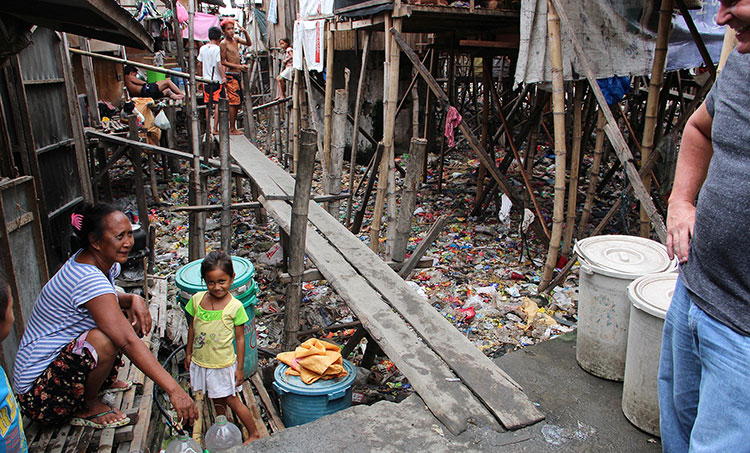 Joseph Zanetti stops to talk with a woman who is filling jugs with water from one of four faucets that serve a total of 1,200 people. Passageways throughout most of Isla Verde are all elevated boards. Everything that you see in this photo among the house stilts is trash floating on the water’s surface. This is a very typical scene, and this photo actually makes it look much nicer than it is. If you click on it, it will open in a much larger size. 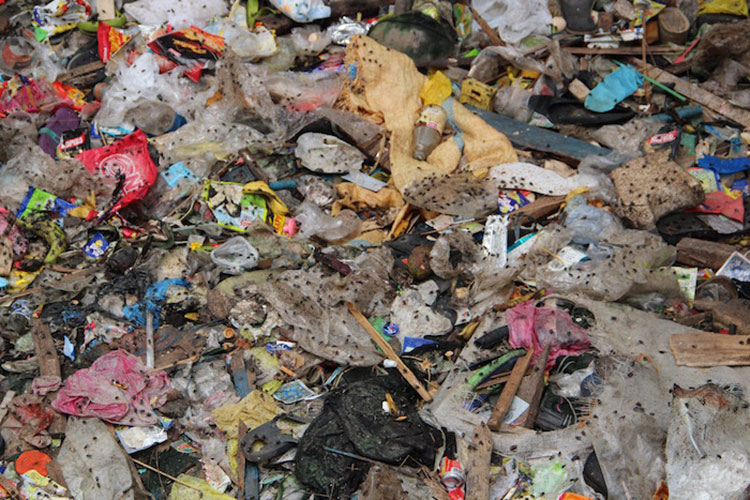 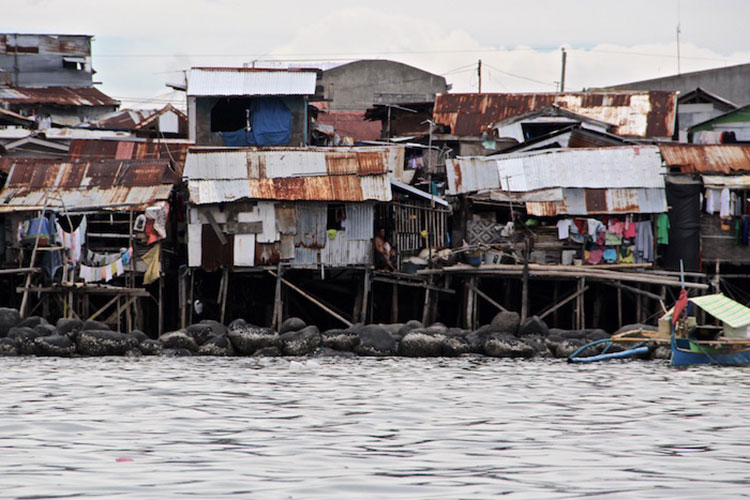 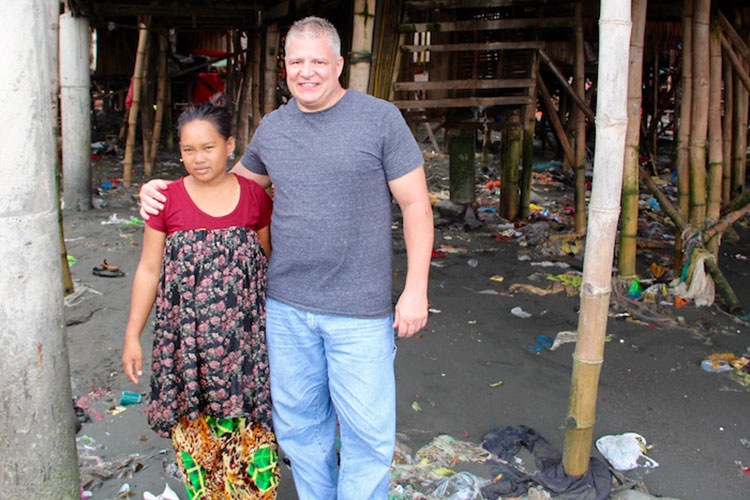 Joseph, five years later, with Carmina, one of the three beggars who returned Joseph’s coins. Carmina is now married and a mother. Joseph told me that, if anyone had told him 6 years ago that he’d be living in the Philippines, much less trying to help a marginalized tribal group, he would have thought they were crazy! 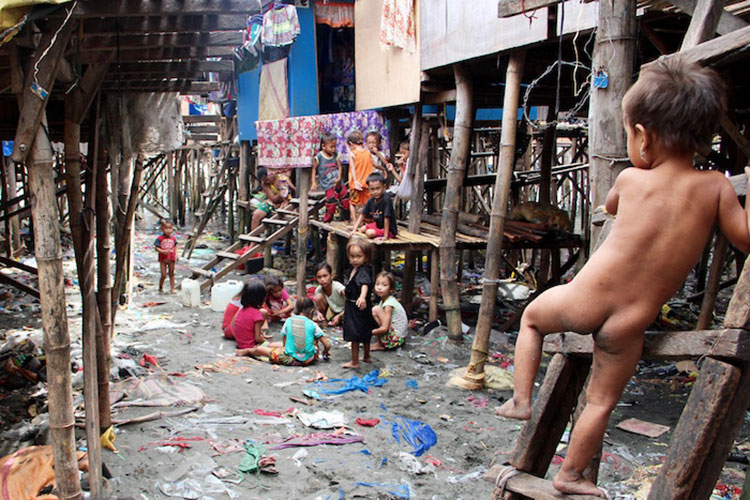 When the tide goes out, children play on the coastal shore bottom. Not all the garbage is generated by the residents, but also by two water waste-ways from Davao City that empty near Isla Verde. 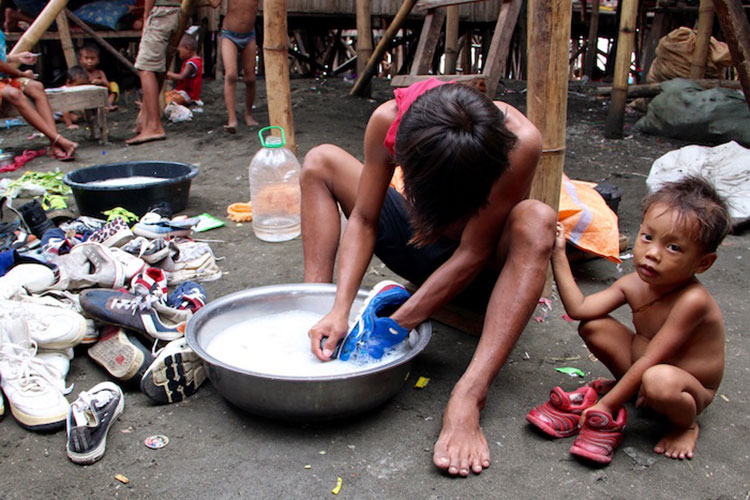 Dad at work: Some of the residents of Isla Verde make their living by purchasing used shoes in bulk, which they clean, repair and re-sell. Younger children often don’t have clothing to wear. 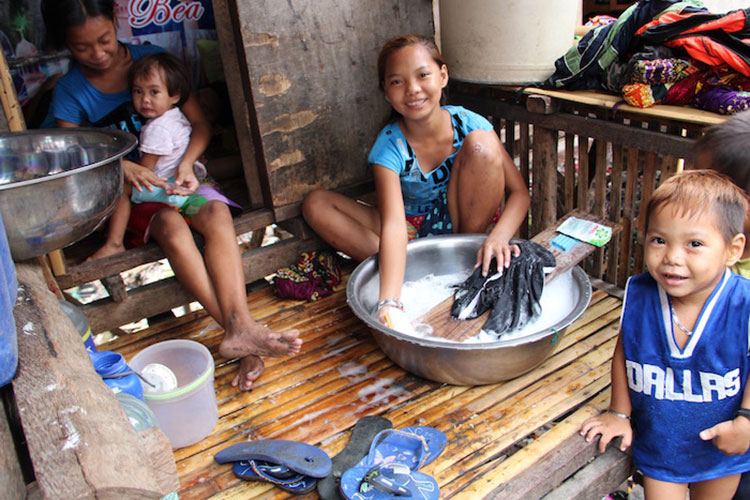 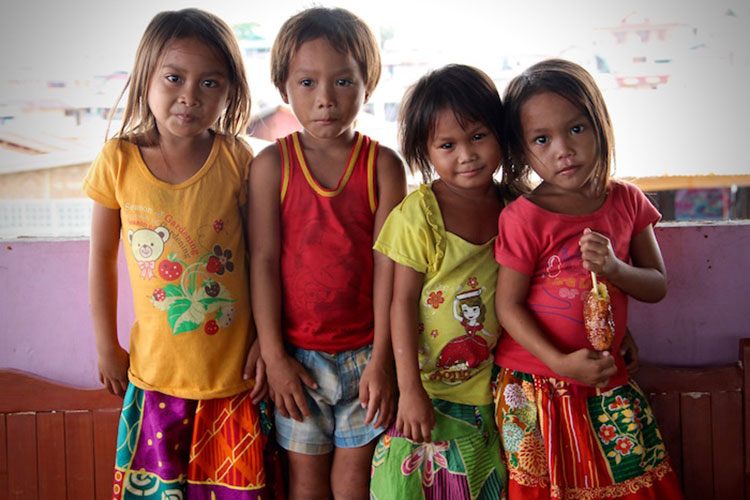 Isla Verde is a mixture of various ethnic groups, but you can always identify the Badjao women and girls by their brightly-colored skirts. 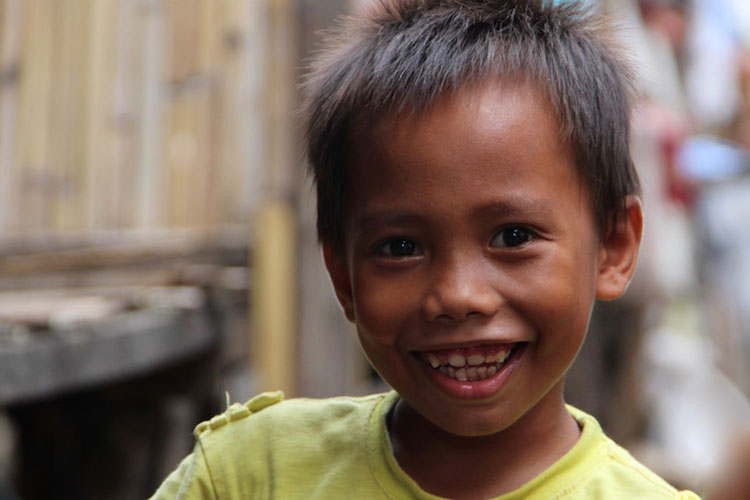 I met no unhappy child as I toured Isla Verde. They are amazingly oblivious to their poverty. 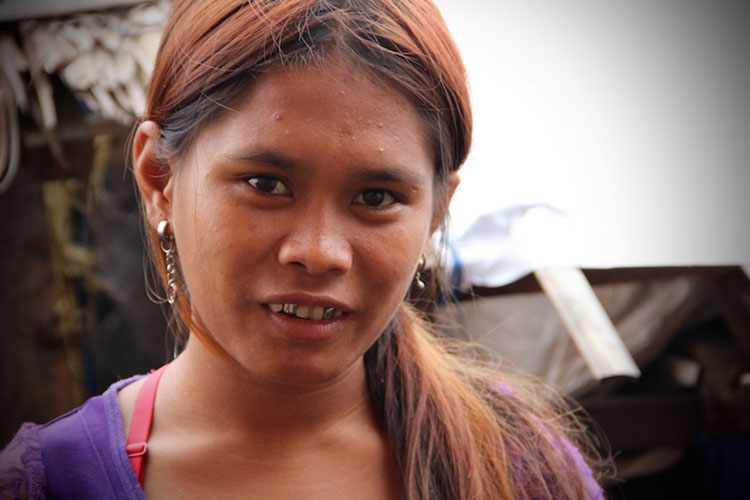 When a Badjao girl reaches puberty, she is often marked with two silver-plated front teeth, indicating that it is time for the dowry to be paid by the family of the man whom her parents have arranged for her to marry. 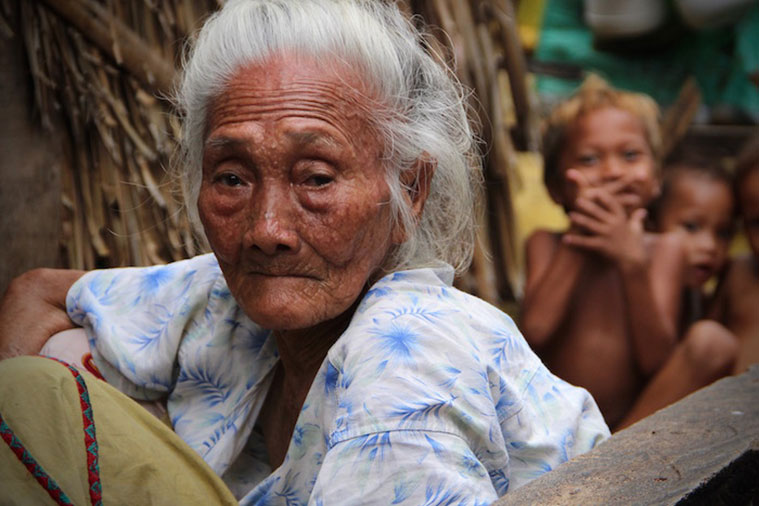