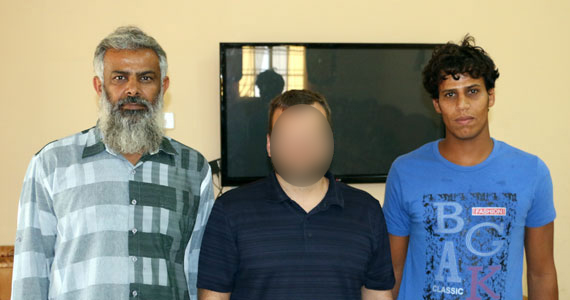 On my recent trip to the Middle East I spent time sharing Jesus with some Jabali people, including Yusef at right

How one tragedy shows our need to reach the unreached

Did you know that today about 40,000 people will die having never heard the precious name of Jesus? This is why we work so urgently to bring the gospel to unreached peoples.

I recently visited our partners in the Middle East who are reaching two Muslim unreached people groups. The Unreached People Groups Ministry has funded the oral translation, recording, and distribution of Bible stories and the gospel message.

On this trip we were only a couple of hours away from known Al-Qaida-controlled territory—an area also where, four years ago, a 32-year-old American missionary was martyred. I have worked with many of this man’s associates in China and was well aware of the ultimate sacrifice he paid.

Heaven’s Family partners took us to a village inhabited by an unreached group called the Jabali, where we shared scripture with an influential Jabali man. Daniel, a seasoned missionary who is fluent in Arabic, shared about the triumphal entry of Jesus into Jerusalem as Messiah. During this time of sharing and praying, a 26-year-old man named Yusef sat in the same room. Yusef seemed transfixed by all of the prayers and sharing about Jesus. Sadly, however, Yusef was killed in a car accident just two weeks afterwards.

At left, Yusef listening intently to the message of the gospel, seemingly oblivious to this picture being taken; at right, cute kids that need the gospel or they could grow up to become another statistic of those who are lost

I can only hope that Yusef believed the truth he heard about Jesus that day. It amazes me that we were there sharing Jesus just weeks before this tragedy. This event confirms our sense of urgency that the Gospel of Jesus Christ must be preached to all nations. “Nations” in the Bible is actually the Greek word ethnos, which is where the English word ethnic is derived. The Great Commission to preach the gospel to all nations is a charge to reach every distinct people group on earth. Your gifts to the Unreached People Groups Ministry are helping us to reach these groups with the gospel.