The Bibles for Believers Fund at Work in Kenya 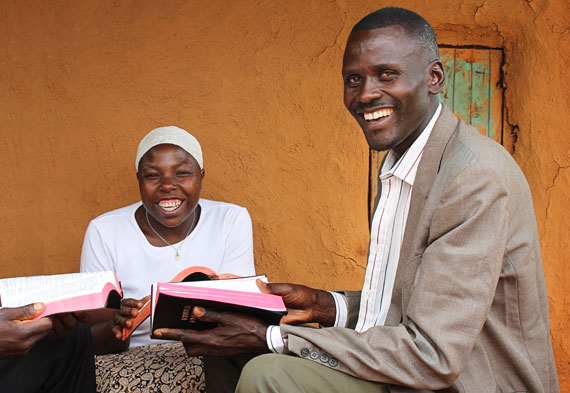 Tabitha and Julius with some of the new Bibles

When you live on just a few dollars a day—as do most of the world’s people—you don’t go to the hospital to have a baby. You deliver your children at home, without a doctor, but hopefully with the aid of a neighbor who has at least some experience. And you hope there are no complications.

So it was with Tabitha Kombo, a pastor’s wife who lived in the small Kenyan village of Itatre, when she went into labor with her fifth child. Tabitha’s labor was long and the baby wasn’t budging. And there were complications. Tabitha’s husband, pastor Julius, sent me an urgent email via a missionary friend (who was broke himself) requesting $200. He wanted to take Tabitha to the closest hospital before something happened to her or her baby, but they had no money. We quickly wired what was needed from the Critical Medical Needs Fund. That was two years ago. I’m happy to report that a little girl named Provi made it into the world, and her mother was fine too.

Over the next two years I corresponded by email with pastor Julius and Tabitha, and they sent regular reports about Provi’s progress. They won my heart, and I looked forward to the day when I could meet them face to face and hold Provi in my arms. 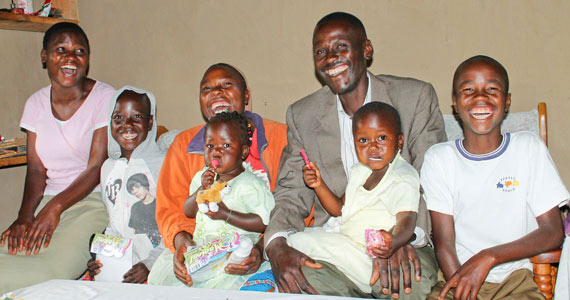 All smiles: Pastor Julius Kombo, his wife Tabitha with Provi in her arms to his right, and their four other children, Devinah, Maureen, Sheila and Ian

When my husband Dick and I began to make plans to return to Kenya in September of this year, I wanted to do my best to visit the Kombo family. I was so excited the day I emailed Julius to tell him we would soon meet!

During our correspondence, I learned that Julius’ church only had 25 Bibles to share among the 75 members. Since I also direct Heaven’s Family’s Bibles for Believers Fund, I told Julius that I hoped to bless his congregation with 50 Bibles when we visited.

We only had to get there…

The night before traveling to Julius’ church, we met him in the small city of Kisii. He said that we’d spend the night there and travel to his village—just three miles away—in the morning. Sleep was difficult. Not only did our hotel accommodations make Motel 6 look like the Hilton, but I was also filled with excitement for the day ahead.

The next morning, the three-mile journey took us an hour, as our van driver had to swerve continuously to avoid potholes, ruts, large rocks, and various other obstacles. We were stuck three times. But I wouldn’t let the night before or the rigorous ride dampen my spirits.

We arrived at long last, to the distant sounds of joyous singing, and the smiling faces of Julius’ family, including little Provi, waiting to lead us on foot to their church. As we gave and received hugs, it was like a family reunion!

At left, Julius and Tabitha with newborn Provi; at center, Tabitha and Julius holding some of the Bibles we distributed that day; at right, a church member testifies about what her new Bible means to her

After a ten-minute walk we arrived at their church. Worship and thanksgiving exploded simultaneously. We were the first Western visitors ever! Dick preached, Bibles were distributed, and the saints were encouraged—all because a baby needed some help coming into the world two years ago. This is a taste of heaven, I thought!

Bibles are needed in many poor villages in Africa. When I travel there, almost every pastor I meet asks me if I could please provide some Bibles. I always tell them that I will put them on our waiting list and supply them as God sends provision for the Bibles for Believers Fund. Muslims are giving away copies of the Qur’an for free all over Africa, so we want to make sure people receive the true Word of God. We provide Bibles for free to the people, but they cost us a minimum of $4 per copy. Thanks for helping us feed spiritually hungry hearts in Kenya.