The Persecuted Christians Fund at Work in Kenya 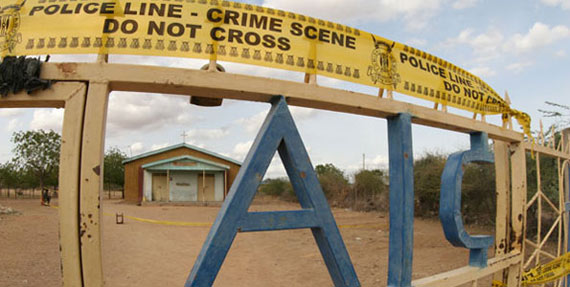 They had, as every Sunday, gathered wearing their finest, arriving to share hugs and handshakes. Worship had been joyful, full of rhythmic African harmonies. The children had just been dismissed for children’s church inside the parsonage on the church compound. None who remained in the simple sanctuary of the African Inland Church in Garissa, Kenya, dreamed that within minutes, many among them would be in heaven. It was July 1, 2012.

Without warning, several grenades, tossed into the sanctuary through the back doors, exploded, rocketing shrapnel in every direction. Seconds later, three masked gunmen entered, firing their automatic weapons at survivors who were trying to escape or seek cover. They showed no mercy. Then the assailants made their escape, leaving behind a bloody carnage.

The terrorists were members of al-Shabab, a radical Muslim group linked to al-Qaeda. Their motive was twofold: exact revenge against Kenyan military forces for a recent incursion against them across Somalia’s border, and send a message to the churches of Garissa that are influencing Muslims to turn to Christ.

As the smoke cleared, sixteen believers were dead or dying and eighty were wounded. Every survivor lost friends or loved ones, including parents and spouses. Some lost their eyesight or limbs.

Soon after the attack, we made contact—through a friend and brave British missionary who traveled to Garissa—with the surviving pastor of the Garissa Africa Inland Church, Joseph Mutunga. He has since guided us as we have striven to provide lasting help to his surviving church members.

One of them is the pastor’s own wife, Ann, who needed major surgery and skin grafts to repair a gaping wound on her right thigh. Still recovering, she is thankful that her three children had left the sanctuary just prior to the attack, and that her husband’s life was also spared. Her youngest sister, however, died from wounds she sustained. Ann confesses that she is still grappling with unanswered questions and struggling to love the Somali people whom she and her husband felt called to reach.

Using our resources as best we can, Heaven’s Family has made a difference in Garissa. Through our Persecuted Christians Fund, we’ve met medical needs of other survivors, served the longer-term needs of orphaned children and widows, provided income-generating opportunities for handicapped survivors, as well as paid for rehabilitation, trauma therapy, church repair and Bibles.

Now, months later, as most of the physical wounds have healed, deep emotional scars remain. In spite of the ongoing danger, Joseph and Ann Mutunga have bravely remained in Garissa with their three children, continuing to obey their calling to reach Somalian people, even though their youngest son, when he sees Somalians in town, often asks, “Is that one a terrorist?” Violence against believers continues in eastern Kenya. Please pray for the saints there.

Every day around the world, at the hands of the godless, followers of Christ are marginalized, denied justice, robbed, raped, evicted, jailed, tortured and killed. The Persecuted Christians Fund seeks to relieve their sufferings. Your gifts make it possible for us to serve our persecuted brothers and sisters.