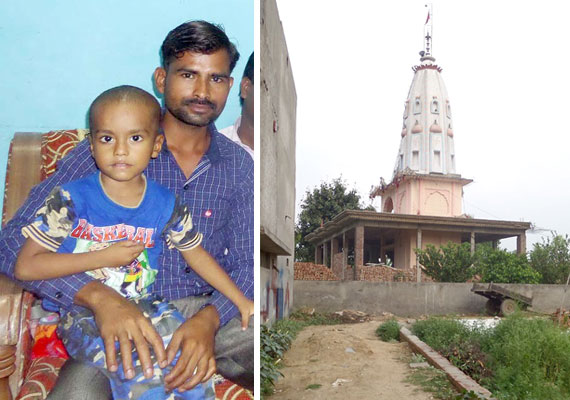 At left, Rajeev with his 8-year-old daughter Lily; at right, the temple where Rajeev once sought healing for his daughter

An Indian father frantic to save his precious daughter

Please note: For security reasons, names have been changed.

Oh no, it’s happening again! Lily’s body felt like it was burning up and she started screaming uncontrollably. Rajeev grabbed his young daughter and ran out the door. Maybe the priest can help, he thought, as he sprinted towards the Hindu temple in his village.

The day Lily came into this world was the day her grandmother died—that was 8 years ago. Since then, Lily has been plagued with illness. The villagers believe that when the grandmother died, her spirit entered Lily and has been tormenting her ever since.

Each time Lily’s illnesses would manifest, Rajeev would rush her to the temple where the priest would perform black magic rituals that provided temporary relief.

After many years, Rajeev had spent most of his hard-earned money on these rituals and was growing desperate, as the illnesses would always return to torment her.

This time, as Rajeev sprinted towards the temple once again, he was completely unaware that he ran past a couple of new visitors in the town who happened to be Heaven’s Family-supported national missionaries. Curious about Rajeev’s urgency, the missionaries stopped at a nearby shop to inquire about him.

The following week, the missionaries showed up at Rajeev’s house. They shared with his family about how Jesus Christ miraculously healed each of them, and had given them new life as they trusted in Him and repented of their sins. Rajeev had never heard the gospel before, but he was desperate for help.

When Rajeev and his family put their trust in Christ, young Lily was completely healed! No more manifestations. No more black magic. No more fear.

Rajeev, his entire family, and 3 other families are now following Christ and are meeting in Rajeev’s house for fellowship, discipleship and prayer. They are the first Christians in the history of their village! And they are excitedly sharing their testimonies of transformation with their neighbors. 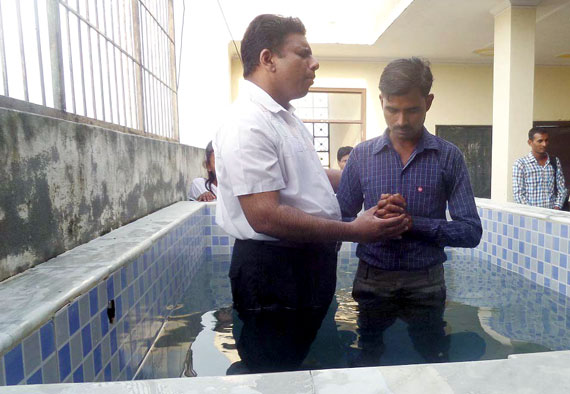 Rajeev, at right, being baptized

What would you do to save your child’s life? Or the life of someone you love?

Millions of people in the world today have never heard that Jesus Christ loved them so much that He died for their sins so they could live forever with Him. The freedom, hope and life you and I enjoy in Christ each day is unknown to them as they exist in bondage, despair and death.

Your partnership is enabling men and women to carry the liberating Truth of the gospel to villages that are in desperate need of salvation.

David Servant takes you to the unreached mountain villages of Burma…
“Beautiful lady, what do you do?”