Drinks on the House…of God

The Disaster Relief Fund at Work in Haiti 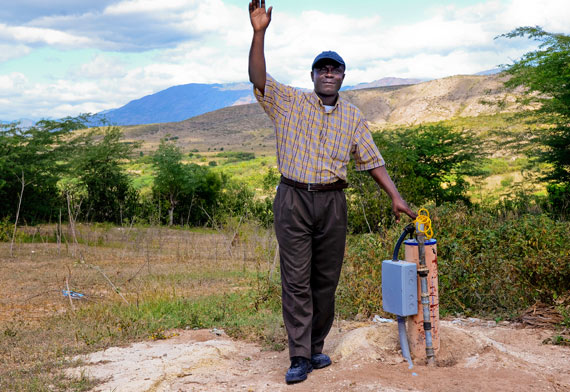 I sat talking with pastor Preval Meritil, longtime friend of Heaven’s Family and my host once again for this, my fourth visit to Haiti. Together, we had done a lot of work since the earthquake one year earlier, and this time I was leading another work team, checking on projects that we’d started at our adopted Resettlement Camp, and visiting the orphanages Heaven’s Family had been supporting even before the earthquake. Preval told me about another needy orphanage named El Bethel, meaning “House of God.” Since El Bethel was on our way to the Resettlement Camp, we decided to visit.

The next morning we headed north out of Port-au-Prince, still the crumbled, chaotic mess it has been since the earthquake. Forty minutes later we turned onto a very rocky dirt road, and with the wheels of our vehicle locked in four-wheel drive, slowly climbed upwards, winding our way past sparse shack-like homes to the top of a small hill. We had arrived at El Bethel.

Appalled. That was my first reaction. There on top of a scenic hilltop sat a crudely-built cement block building with three dirt-floored rooms, a slapped-together wooden shelter with no walls, and a rough-hewn outhouse. This was home to orphanage director Luckner Milhomme, his family, and a few dozen orphaned children. Not only were they living in very primitive conditions, but they had to walk a few miles to get all their water. Baths consisted of standing outdoors during passing rain showers.

I learned that El Bethel’s facilities had previously been located in Port-au-Prince, but their building had been damaged beyond repair when the earthquake struck. That is when they relocated to their present location. Starting with nothing, they gradually constructed the rudimentary buildings I was beholding. We spent a bitter-sweet hour talking to Luckner and playing with the children before saying good bye.

As we inched back down the rugged hill, our team talked about how impressed we were with the hearts of Luckner and his wife Magalie—it was evident that they truly loved the children under their care. I left with a determination to help them get the water well they so needed.

After returning home and receiving a cost estimate, Heaven’s Family sent $8,000 from our Disaster Relief Fund to our trusted friend Preval, who promised to secure a driller and oversee the well installation. After overcoming some initial obstacles, including coming up dry on the first attempted drilling, the orphans of El Bethel finally pumped their own water! They all rejoiced at this blessing and gave thanks to God for His provision. 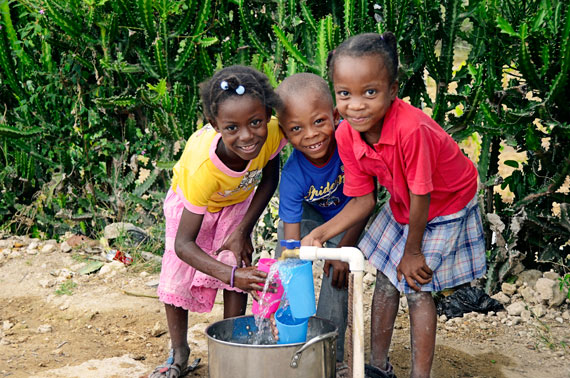 Fenick, Marius, and Beverline getting a drink of cool, safe water at El Bethel Orphanage in Haiti

Amazed. That was my second reaction. When I returned again to El Bethel last December, a year after my first visit, I could hardly believe the difference. New wooden dorms with cement floors had been built along with a first-rate water system that included a pump, generator, cistern, and a bathroom facility with running water and faucets.

As I traveled home I praised God that Fenick, Marius, and Beverline—and the rest of the children of El Bethel Orphanage—can now drink all the water they want, anytime they want. I was also thankful for the many friends of Heaven’s Family who helped provide those precious ones with a cool cup of water in Jesus’ name (Matt. 10:42). They will not lose their reward.

Heaven’s Family continues relief and development efforts in Haiti two years after the devastating earthquake that took 300,000 lives and made one million people homeless. Your gifts—from $1 to $1,000,000—are still very much needed and appreciated by our Christian brothers and sisters in Haiti. If you would be interested in joining a future short-term missions team to Haiti, please send an email to Jeff Trotter at Jeff [at] HeavensFamily.org.