As always, thanks so much for your prayers while I was in Sierra Leone, West Africa, last week. Amazingly, I was able to travel from Pittsburgh to Freetown (the capital of Sierra Leone) with just two flights. The downside is that I had a 17-hour layover in London. I made the best of it, however, by taking an all-day bus tour to Shakespear’s birthplace and Oxford University, during which I learned the origins of two of our English expressions, “Sleep tight,” and “It’s raining cats and dogs.” The first expression was spoken by parents after they used a special wooden tool to tighten webs of rope that supported the straw mattresses of their children’s bed frames. (I saw such a thing at the house of Shakespear’s birth.) And when it rained so long and hard on old English thatched-roof houses that the cats and dogs became uncomfortable in their normally-cozy sleeping spots up in the rafters and thatch, they came down to sleep with the people. Thus it was raining cats and dogs. Enough for old English expressions. 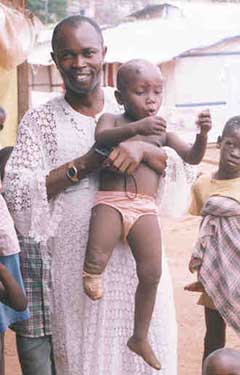 The photo on the left is of my host in Sierra Leone, pastor Lewis James, a remarkable Nigerian missionary. He is holding a small boy who, just a few months ago, was pulled from his mother’s arms by a rebel soldier who then laid him on a stump and hacked off his leg with a machette. This happened to thousands of Sierra Leone citizens, young and old, as rebel soldiers had quotas to meet, regularly bringing bags of hands and feet to their commanding officers. Those who failed to meet their quotas were executed. Many amputees are now living in makeshift camps, one of which Pastor Lewis and I visited, bringing sacks of rice and some clothing. There we met with numerous men and women who were missing both hands or both legs. Although pastor Lewis lives in one room of a crude concrete block building, has no car, and pastors a very small congregation that meets in a dilapidated building, he pledged to sponser the little boy he is holding so that the child can attend nursery school in the amputee camp. Pastor Lewis also takes care of other orphans. His 22-year old financee, Jasmine, was raised as a Muslim, but came to the Lord through his ministry. She was severely beaten by her father in an unsuccessful attempt to win her back to Islam, and then kicked out of the house. Such are the lives of Christ’s followers in Sierra Leone. Where will I stand at the judgment when compared to such people?

The war is now over, but Sierra Leone will be suffering for years to come. I have never seen so many humanitarian organizations represented in one country, a very welcome sight. But the hope of this impoverished Muslim nation is Jesus, and the native church could use our help. I’m happy to report that we have begun to help, and our three-day pastors’ conference was a great success. I was the keynote (and only) speaker, and spent my sessions teaching on many topics that are relevant to pastors who want to make disciples. Based on the comments I received from many of the 300 pastors who attended, our impact was significant, and they requested another conference as soon as possible, promising that many more pastors would come once they spread the news. On the final day I asked if any of them lacked either food or money for food for the next day. Thirty-two raised their hands. (I received an offering on their behalf which totaled about forty dollars.) One hundred pastors also received copies of The Great Gospel Deception (all I could take in my luggage) and we are hoping to print several thousand more in Sierra Leone before returning next year.

Thanks so much, on behalf of the people of Sierra Leone, for your invaluable help in making our recent ministry there possible. God really blessed. I wish you could have seen pastor Lewis’ tears as I was leaving. May the Lord motivate and help us to do more.

For the only thing that matters,