Good news! Our new web site is up and running. Although still under construction, pastors around the world (and anyone else in the world) can now read five of our books for free! (two of which have never been published). You can check it out at www.shepherdserve.org. My wonderful daughter, Charity, designed the entire web site.

As I’m sure you suspected, our Cambodia pastors’ conference, sponsored by Global Connections, went very well. Two hundred pastors representing numerous denominations from all over Cambodia gathered for three days in the capital city of Phnom Penh. I taught on “How to Grow a Self-Supporting Church,” as so many of the Cambodian churches are subsidized by American denominations. The result is that churches are crippled, and Cambodian pastors often frequently sell themselves to the highest denominational bidders from the U.S. Those denominations then report to their constituencies their successful church planting efforts in Cambodia. (I brought to Cambodia one recent publication from a very well-known American ministry that reported their impact in Cambodia, and let several Cambodian pastors read it. They were amazed at the false claims that were made.)

In any case, I had the privilege of sharing basic truths to help the Cambodian pastors understand how their churches can become self-supporting through making disciples who obey Jesus’ commandments regarding stewardship. I think a significant impact was made. I also answered scores of questions on many topics during four workshop sessions. All-in-all, having made eight trips to Cambodia over the years to teach pastors, I think the Cambodian church is more mature than ever, although it still has a long way to go.

After the conference, I traveled to the village of Anlong Veng in northern Cambodia with my friend and long-time youth minister Bill Pickard. We journeyed in a pick-up truck for 16 hours through thick jungles over some of the worst roads I’ve ever experienced, almost to the border of Thailand. There we visited a very young church in the remote stronghold of the former Khmer Rouge army, a brutal military force responsible for the deaths of as many as two million Cambodians in the “killing fields” several decades ago. We were accompanied by the former Director of Communications for the Khmer Rouge army, now a pastor, as well as a former Khmer Rouge general, who converted to Christ just six months ago and who is now full of love and zeal for the Lord. It was in his very primitive home that the church of Anlong Veng gathers, and a special meeting was held shortly after we arrived with some church members and unsaved neighbors. What a blessing it was to share the gospel with some people who had never heard the gospel once in their lives.

This was Bill Pickard’s first mission trip and his life was changed. It was a joy to have him along. Not only did Bill eat two large fried Cambodian spiders (see photo below), but he also taught a workshop for some pastors at our conference, and helped a medical team serving a village clinic. He wants to return with me next year, and I want to extend that same invitation to you as well. There are plenty of good things to do in Cambodia. You can meet people who have never once heard of Jesus and who will be interested to talk to you about your faith. It is like heaven! And we’ll stay in great hotels that will cost you only $14 a night! (The spider-eating is optional.) Mark you calendar for October, 2003, and let me know.

Finally, here is a short excerpt from one of the many letters we’ve recently received in response to our short wave radio broadcast. It is from a pastor in northern Uganda:

I am happy to inform you that many people here have been transformed as they listen to your radio [broadcast]. Also great revival is taking place too as we share your books that you have been sending to Pastors here. It seems that our dreams of bringing Revival to our country is soon coming true….We are constantly being faced with rebels activities here and the eventual negative consequences. And we are now challenged the more with responsibilities of reaching the unreached and teaching the untaught in war areas.

Thanks so much for your continued prayers and financial support that result in the blessing of so many pastors in the Third World, who in turn minister to thousands more. I’m home now for just a week before leaving for Nicaragua on Monday, November 18. 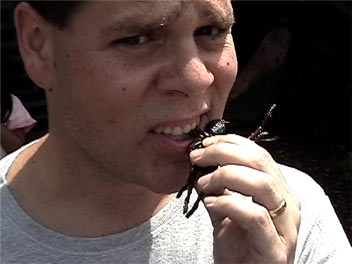