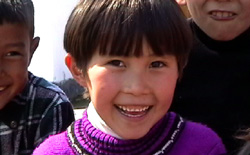 I hope this letter finds you enjoying the new colors of Spring. I missed ten days of those colors while I was in Bishkek, Kyrgyzstan, Central Asia, during the first part of this month, and where Spring arrives a few weeks later. Kyrgyzstan is lagging behind in many ways, not the least of which is economically, being the poorest of the former Soviet republics. Its 4.5 million people of various ethnic backgrounds are also lagging behind in hearing about Jesus, having been sealed off from hearing the gospel for many decades. I’m happy to report, however, that the Holy Spirit is working through a young church now. Kyrgyzstan is 78% Muslim, but like so many of the nominal Christians in the “Christian” nation of the U.S.A., most Kyrgyz Muslims don’t take their religion too seriously. It is a country that is ripe for harvest.

Our Kyrgyzstan pastors’ conference was very blessed of the Lord. About forty pastors and leaders attended who were extremely hungry for truth. At times they broke out in cheering and applause because they were being so blessed by what they were learning. Most of them were fairly young in the Lord, and they were full of questions. I attempted to lay a good foundation of the gospel to give them something solid to build on.

The conference was organized by American missionary John Carey, who also did an excellent job teaching two of the sessions. It was a great encouragement to me to see the work and that John and his wife, Beth, are doing in Kyrgyzstan, as they were discipled and sent out from Grace Church about two-and-a-half years ago. John and Beth left behind a very comfortable life in the U.S. and now live in a very typical, post-communist concrete apartment building in Bishkek. When you enter the dark and damp “lobby” of their building, you are greeted by the smell of urine on the way to the 4-person elevator to get to their 6th-floor apartment. Among other things, John and Beth are facilitating American short-term YWAM teams, sharing the gospel, serving in orphanages, planting a village church, and learning to speak Russian.

I was also blessed to spend some hours visiting with a refugee family from Afghanistan who will be immigrating to Pittsburgh later this month. They were forced to flee from Afghanistan when the Taliban took power, and consist of an elderly couple, their two sons, and the wife and five children of their oldest son. Because of a fluke in the system, their 25-year old daughter, whose name is Brishna, was allowed to immigrate some months ago. My wife, Becky, is Brishna’s best friend, and she has been helping Brishna adapt to American life since her arrival, and will do the same for Brishna’s family when they arrive. If you are interested in helping them acclimate to the U.S. in any way, let me know. They are coming with just their clothes. I discussed several spiritual subjects with the oldest son (who speaks five languages) and gave him a Persian Bible, and would say that the family is good ground for the gospel. I think our love can win them.

Finally, in keeping with our goal to do something for the “poorest of the poor” in every country in which we minister to pastors, on behalf of our partners I was blessed to give some financial help to a fatherless family of struggling Christian refugees from the Muslim war in Chechnya.

Thanks, as always for making this ministry possible through your prayers and financial support. I’m leaving on Tuesday for the Western Hemisphere’s second poorest nation, Nicaragua, to minister to about 100 pastors who live in a remote region of the country. Then in early June I’ll be in the world’s poorest nation, Sierra Leone in West Africa, serving hundreds of pastors. In July, we are scheduled for a pastor’s conference in the poorest nation in Europe, Moldova, formerly of the Soviet Union. (I seem to go to poorest places!).

P.S. Here is an excerpt from a letter we recently received from a Baptist pastor in Myanmar, a country in South East Asia where Christianity is very restricted:

“Your book, The Great Gospel Deception…it is much more convincing, convicting and illuminating than I ever imagined. When I was asked to lecture during our annual Association meeting in February, I taught them about legalism and antinomianism and the narrow way in between, based, of course, on your book. The result: Popular demand to hear the message first hand from the author. So I write to you from Kalaymyo requesting you to teach our pastors (numbering forty) at your earliest convenience.”

Praise God that the book he is referring to has now been translated into Burmese and Chin, and is now awaiting all the funds needed for printing 6,000 copies to be given to every pastor and Bible School student in the entire country. Yesterday we received half of the funds we need in the form or a special gift from a friend. Praise God!