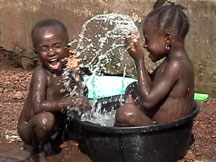 The skinny-dippers in the picture to the left are having a wonderful time, even though they live in a shanty-town slum in the world’s poorest country. Too young to know they are poor, life’s simplest pleasures offer wonderful delight. Their innocence was an inspiration for me to enjoy my own cold-water bucket-baths for five days in Sierra Leone, West Africa. I did my morning skinny-dipping in an indoor bathtub, however, after first rinsing away the night’s dead cockroaches that had crawled up the drain!

Those two little skinny-dippers live in a “camp” for victims of Sierra Leone’s recent civil war, displaced persons who fled their villages in the provinces, many of whom had hands, arms or legs hacked off by rebel soldiers yielding axes. The only crime committed by Sierra Leon’s thousands of amputees is that they were suspected of being in favor of democracy. The stories I heard from several of the amputees with whom I spoke were horrifying. Many were given the choice of a “long sleeve” or “short sleeve” amputation. I was amazed how they could smile as I took their photographs. Several in the photos below told me that they believed in Jesus and knew they would regain their limbs in heaven. Because of the kindness of our partners, we were able to purchase soap, toothbrushes, toothpaste, sugar and seven 100-pound bags of rice to relieve their hardships to a small degree. Would you take a minute and pray for them now as you look at their faces? And let us thank God for how blessed we are. 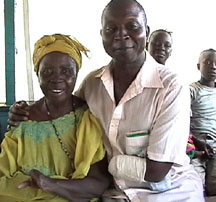 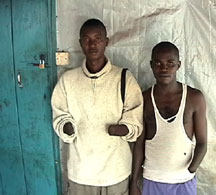 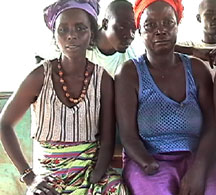 One of the most amazing people I know lives in Sierra Leone. His name is pastor Lewis James and he is a missionary from Nigeria. He lives in one room of an abandoned home with a few pet cats. Lewis is so continually joyful that his normal countenance appears to be a smile. He and his small congregation reach out to street children, feeding and clothing them, and helping them with school fees if possible. No one wonders if pastor Lewis gives ten percent of his income to the Lord’s work. I wonder if he keeps any more than ten percent of his income. He lives by faith. In the photo below, pastor Lewis is holding an “adopted” son in the amputee camp (you may remember this little boy from a photo in my last newsletter). Praise God that little boy now has a prosthetic leg and walks quite well. Pastor Lewis is paying for him to attend school. 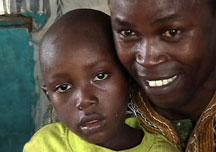 Pastor Lewis also worked for months to organize our 3-day pastors’ conference, which was attended by about 200 pastors, assistant pastors and church leaders. Some journeyed more than one hundred miles to attend. I was the only speaker, so I enjoyed hours of teaching each day on many topics, such as church planting, missions, marriage and discipleship, as well as answering scores of questions. On the final day we gave at least one book to every pastor, and those books became prized possessions. I was amazed that a number of them were so enthusiastic over what they learned that they joined together to form a Shepherd Serve partner’s club, established for the purpose of sponsoring a weekly FM radio broadcast in the capital of Freetown. It was not my idea. All I need to do is send them some of our already-recorded short wave broadcasts, and they will take care of the rest. And this happened in the world’s poorest country, which is 70% Muslim. As always, thanks so much for making all of this possible. Your reward is in heaven.

My next trip overseas is not until the end of July, to Moldova, Europe’s poorest nation, just north of Romania. I’ll be leaving, however, on June 23rd for 18 days in Oregon and Washington, where I’ll be teaching in at least four churches, all consisting of Russian immigrants. Speaking through a Russian interpreter will give me a chance to prepare for our October pastors’ conference in Russia, and I hope to raise some financial support in the process. I’m taking my family with me, and we’re going camping in between preaching assignments.

For a Glorious Cause,