“When we go back to our villages, we will tell more people about Jesus and be a true disciple of Him!

Thanks so much for your prayers for safety while I was in a restricted country (that I can’t name) for the first ten days of this month. I’m happy to report that God answered your prayers, and our secret conference was not discovered by the police. It was more of a risk for the believers than for me, as I would have only been deported, at the most, if we had been discovered. The believers, if caught, may have faced fines that were very stiff by their standard of living, but they apparently considered it worth the risk to learn more of God’s Word.

The believers who attended our conference live very simple lives as subsistence farmers in remote mountainous areas. Some walked six hours on mountain paths just to catch their first bus as they journeyed to be with us. They are very poor. They all wore the same clothes each day of the conference.

I can’t tell you every detail for security’s sake, but let me tell you what I can. American missionary ———— (a graduate of our own little Bible School that we used to run over a decade ago in Pittsburgh), and his partner, ————, frequently travel to remote minority villages in this country and lead people to Jesus who often have never previously heard His name. They periodically invite some of the emerging leaders to their city for week-long training conferences. For our conference, a fairly large unfurnished house was rented and a total of 23 believers were brought in at night in small groups. They never left that house for the entire week so as not to arouse suspicion among the neighbors to what was going on inside. We quietly met each day for morning, afternoon and evening sessions in a crowded upstairs bedroom to prevent our being heard from the outside. Most of the believers sat on the floor as they listened.

——– and ——- were a little surprised at who showed up. Only four of 23 believers were pastors or leaders. Half of the rest were young believers, one young girl having just received the Lord two days before she came to the conference. I’m accustomed to speaking to fairly knowledgeable pastors, so it was a little bit of an adjustment for me. I was so blessed, however, as the Lord really helped me to simplify my teaching to make it understandable to some very precious people who had, for the most part, only a primary school education. They were an absolute joy to teach, and as is always the case, I learned along with them as I taught. In many ways they were just like children as they would joyously laugh at the simplest animated teaching. They noticed that I would start every session with “OK,” and so they started saying “OK” every time they would see me. I also noticed that none of them had wristwatches, and so I asked how they could tell the time. They said they could just look at the sun in the sky, or if it was cloudy, they could tell the time by their stomachs!

Here are a few more photos of the believers. Thanks for making it possible to minister to these precious people, some of “the least of these” of Jesus’ brothers and sisters. To God be the glory for His gracious work in them and us!

While I was in that restricted nation I initiated another translation project of the almost-completed Disciple-Making Minister into the native language. In the years to come, we hope to see that “Bible School in a Book” placed into the hands of thousands of young leaders. Leaders in this restricted nation consistently say that what they need more than anything else is leadership training. We also now have book translations completed or in progress in Russian, Spanish, French, Swahili, Bulgarian, Burmese, Chin, Mizo and Vietnamese. In the years to come, we will be able to do exponentially more than what we now do at our pastors’ conferences around the world.

Although many American Christians know about the hundreds of thousands of house churches in Asia, very few realize that house churches are a fast growing international phenomenon. There are tens of thousands of house churches in Latin America, Eastern Europe, the Middle East and Africa, and not only in countries where Christians are suffering persecution. In fact, it may well be true that there are more Christians around the world who meet in homes than in church buildings. In the United States and Canada, there is a growing house church movement that includes several thousand small churches. The Southern Baptists are actively planting house churches here in my home state of Pennsylvania. The Free Methodists are doing it in Canada. These are not new churches that presently meet in homes and who hope to have their own building one day. As they grow, they simply multiply and meet in more homes. At the rate that the house church movement is presently growing, I predict that in the next twenty years, house churches will go from being considered strange in North America to becoming accepted and then very popular, just as the home schooling concept has in the past twenty years. (Our family has been involved in home schooling for about seventeen years, so we’ve watched the change.)

Wonderful Things to Rejoice About

God is so good. Rejoice with us that the Mizo printing of The Great Gospel Deception is completed. Several thousand copies will now be distributed to Mizo-speaking pastors and Christian leaders in northwestern Myanmar (Burma). We frequently receive letters from Chin- and Burmeses-reading pastors in Myanmar telling us how much that book has helped them. In December, we’ll be there to conduct a pastors’ conference for 300 pastors.

Through the gifts of our generous partners this month, Shepherd Serve was enabled to purchase ten bicycles for Vietnamese church planters in remote tribal areas. Thanks for helping the gospel go where it has never been heard!

This month has been extra special, as we received gifts from two foundations, one Canadian and one Finnish, given to help orphans in Myanmar. Those gifts enabled us to provide treadle sewing machines for 13 orphanages there, as well as purchase 16 acres of rice paddies and 2 oxen for two of those orphanages so that they can become self-sufficient. Praise God! He is the Father to the fatherless.

On August 25, Becky and I celebrated 25 years of marriage. Now that is something to rejoice about! Shepherd Serve reaches its two-year anniversary on September 1. We have relied on miracles from God every month, and He has proven Himself faithful through His people.

What we need more than anything else are regular monthly supporters. Also, the French and Swahili translations of The Great Gospel Deception are now complete and the Spanish translation is almost complete. We need a total of about $12,000 more for printing costs so we can begin putting those books into the hands of pastors in many African countries and in Latin America. Your help with these projects in any amount can have eternal impact.

I solicit your prayers as I depart this Saturday for our first pastors’ conference in another very restricted nation that is always near the top of the list for those that persecute Christians. Please pray for our safety and spiritual success. 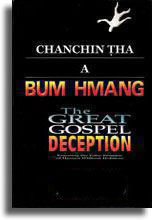 The new Mizo version of The Great Gospel Deception