At our two secret September conferences in Saigon and Hanoi, we were able to give every pastor the Vietnamese translation of The Disciple-Making Minister, which required 600 translated pages. By the time you read this, all 1,000 copies are probably already distributed to strategic Christian leaders all over Vietnam. Praise God!

With your help, we were able to transport pastors from quite a few Vietnamese provinces to our two conferences, including those in the central highlands of Vietnam populated by tribal minority peoples. Those tribal pastors who came to our Saigon conference traveled twelve hours by train. We sent them back home with books to give to other pastors.

Our conferences were small and secretive because they were illegal, as are most church meetings of any kind in Vietnam. One-half of the 90 pastors who attended indicated that they have experienced police harassment. They had to be invited to attend our conferences by means of an invitation that said, “We’re having a big party with an anointed cook!”

I traveled back and forth each day to the conference location in Saigon by motor scooter, wearing a helmet and jacket in order to disguise my caucasianality. (I just made up that word.) The pastors would arrive and depart at staggered times in order not to draw attention to our gathering. In Hanoi, the precautions were even greater. Thanks to the Lord and your prayers, we were not reported or discovered. At the final session of the Saigon conference I felt like I was in heaven, as many of the pastors testified to the miracles God has been doing in their lives and ministries. Some of the tribal pastors shared how they used to worship rocks, rivers, trees and tigers before they heard the gospel.

The most wonderful event of the trip was this: The chairman and committee of the Vietnam Evangelical Fellowship, who represent practically every Protestant denomination in Vietnam (27 in all) and 4,000 underground house churches, asked me for another printing of The Disciple-Making Minister. Our meeting and their request were entirely initiated by them. The chairman said that most of their pastors would be able to pay for a copy if our ministry could just subsidize 1/2 the cost. That means we could ultimately provide one copy of a 600-page book for 4,000 pastors for only 90 cents per copy! (Printing is amazingly inexpensive in Vietnam because labor is so cheap.) This is an unprecedented door of opportunity for us to impact an entire nation, and a nation where believers are under persecution. If you would like to help with this project, please mark your gift “Vietnamese TDMM.” Thanks so much. 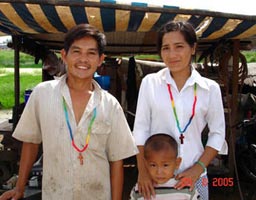 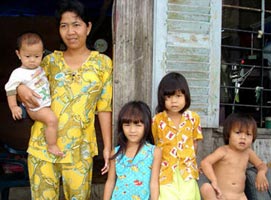 While I was in Vietnam, we were able to help both of the very poor Christian families in the photos above. The man and woman on the left are a brother and sister, and they’ve been Christians for only six months. After the sister’s conversion, she was repeatedly beaten by her alcoholic husband, and she was forced to flee with their son to live with her brother in the shack before which they are standing in the photo above. He repairs bicycles for a living, and he says that there is nothing he wants now that he has Jesus. Check out the joy on his face!

The mother and four children in the photo on the right live in a slum. The mother, a believer for nine months, is trying to support her four children while her husband, a rickshaw driver, is dying of tuberculosis in a hospital. She earns her meager living by scavenging through piles of garbage to collect recyclables and sell them.

Your gifts made it possible for I Was Hungry to give each family $100, with which they will be encouraged by their pastor to wisely invest in their existing businesses or to start new businesses. These are not “rice Christians,” but Spirit-filled young believers who are reaching out to their neighbors by hosting church meetings in their “homes.”

Thanks to You from Around the World:

Here are some excerpts from letters we received last month. Feel good as you read them, because without our partners, these letters would never have been sent to us.

From a pastor in Ghana, West Africa:

I have received two boxes containing 32 valuable books entitled The Disciple-Making Minister. This book is the book that is needed most in Christian circles. It bridges the gap between conversion and maturity….An incredible piece of work….I have given them to those who can use them very well….Many ministers who saw the books in the hands of those who received it besieged my home to request for some… [We are shipping more, with your help.]

From a contractor in California:

I am glad to be able to help with an orphan. It brings joy to my soul to know I can help you with this ministry. Please don’t think these are just words. Hearing you speak in Kansas, and then in California, and now reading your book [The Great Gospel Deception] I cry tears of joy with thankfulness. Someone finally speaking what we need to hear.

From the Prime Minister of Fiji:

This last one is not a letter, but I discovered that I was quoted last month by the Honorable Laisenia Qarase, Prime Minister of Fiji, in a speech before the Fiji House of Representatives. He is known in his nation as a devout Christian, and he was endorsing something called the “Reconciliation, Tolerance and Unity Bill,” that is designed to heal deep rifts between political factions in Fiji. His actual words were,

David Servant tells us in The Christian Disciple’s Manual [now revised as The Disciple-Making Minister] that the wrongs people have committed against us may seem great. But compared to how much God has forgiven us, they are really of no comparison.

What profound and original thoughts! Mr. Qarase went on to make reference to words spoken by other lesser-known Christian leaders such as Corrie Ten Boom and James Dobson. I’ll have to remember to tell Jim about this the next time he calls me for advice on marriage or raising children, as he often does.

By the time you read this I’ll be in a restricted country. If all goes as planned, I’ll be speaking to 100 strategically-chosen pastors from all over this country, including some near hostile borders. Thanks to you, I’ll be giving those pastors 1,000 copies of The Disciple-Making Minister and Saving Faith, translated into their national language. They will be distributing them to fellow pastors all over their nation. I’ll have a good report next month!

Later in October I’ll be ministering at a pastors’ conference in El Salvador, Central America. And on the last weekend of the month, I’ll be speaking in Joaquin and Lufkin, Texas. If you live in East Texas or West Louisiana, I’d love to see you then.

Thanks again and kindest regards,