A few of the 1,000 Christian leaders who received the Mizo version of The Great Gospel Deception

On the first morning of my 3-day November conference in the Indian state of Mizoram, I was wondering why I came. As I taught, about 800 Mizo pastors and Christian leaders stoically sat before me like wooden Indians. (Seeking some consolation, I reminded myself that I was in India, so these were Indians.) About 60% of them were Presbyterians (which certainly explained some of the stiffness), and all the rest were Baptists, Salvation Army and Assemblies of God. A little over 100 years ago, the Mizo people had been tribal headhunters without a written language. Thus, the challenge before me was not as great as what the first missionaries faced, so I kept plowing with God’s Word. Ever-so-slowly, they began to respond. I knew I was making progress when three of them laughed at my joke about the Presbyterians rising first at the Rapture because the Bible says that “the dead in Christ will rise first.” (I later learned that the three who laughed were Baptists. For more tips on cross-cultural communication, see my new book, Effectively Using Humor to Win Your Audience.)

By the afternoon sessions I was actually enjoying myself. The pastors were opening up. On the second day things got even better. By the third day we hit pay dirt. Almost 1,000 pastors and other Christian leaders were present. In the first morning session, I never began my intended sermon. The Holy Spirit helped me in a way that He rarely has, and I didn’t teach—rather I preached for an hour by pure inspiration. I was surprised myself. It was a very searching and convicting message. When I ended, the chairman invited everyone to pray. I could hardly believe my eyes as everyone instantly lifted their voices in unison, something they had not done before. All the previous prayers were led by one person as everyone else remained basically quiet. But this time everyone was crying out to God. Many were lifting their hands, some were kneeling, and a few were even lying prostrate on the floor. That went on for twenty minutes. And when it stopped, different pastors came forward to tell everyone what God had done in them over the past three days. That lasted the entire 2nd session of the morning. Needless to say, we had a good conference that stirred many—who will doubtlessly stir others. As always, thank you, our dear friends, for making this kind of ministry possible. To God be all the glory.

When Orphans Plant a Church

After the Mizoram conference, I traveled to the Indian states of Andrah Pradesh, Kerala, and Tamil Nadu, to visit eight orphanages that are assisted (or will be assisted) by Orphan’s Tear. Those were wonderful days, and I was able to take photos of quite a few precious children who are now waiting for sponsorship via the Orphan’s Tear website. One orphanage that I visited in a small Hindu village in Tamil Nadu is overseen by a pastor and his wife. When they first arrived to plant a church a little more than a year ago, they faced severe opposition from the Hindus. There were no Christians in the village. But they rented a small house and began taking in orphans and unwanted children. When the villagers witnessed this very tangible demonstration of compassion, their attitude changed. One year later, the church has fifty people who pack themselves into that small house where the pastor and his wife live with ten beautiful children. Imagine sponsoring orphans and planting a church in a Hindu village as a result! We’re doing it!

New Indian children waiting for sponsors at OrphansTear.org. All are being raised by a very poor Christian couple.

I was blessed to attend a Christian wedding while I was in Kerala. Like most marriages in India, this one was arranged by the parents of the bride and groom. Once the arrangement was made, they were permitted to meet each other (for the first time in their lives) for five minutes. That was it. The next time they saw each other was two months later at their wedding! Needless to say, the officiating pastor never said at any point during the ceremony, “You may kiss your bride”! The couple never looked at each other during the entire ceremony, and only shyly held right hands at the pronouncement of their union. They will spend the next few months getting to know each other, living in the home of the groom’s parents. They won’t know each other in the biblical sense of the word for quite a few months. (Yes, I actually investigated this…Inquiring minds need to know!)

India has the world’s largest population in abject poverty. 300 million people—more than the entire population of the U.S.—live on one dollar or less per day. This kind of poverty is unimaginable to us. People literally live in little shacks in sprawling slums.

The majority of India’s people are Hindus, but they are proving themselves to be open to the gospel if someone who lives like Christ will just bring it to them. They already know that they need forgiveness for their sins, but they are looking for it in the wrong places. Americans aren’t always helping the situation. A number of prominent Indian Christian leaders recently signed a letter decrying the fact that American televangelists who broadcast in India are hurting Christ’s cause there. They cited the cultural insensitivity of their programming, specifically mentioning that moral Hindus are often repelled by lax American dress standards. The best way to evangelize India is by indigenous disciple-making ministers.

All three divisions of Heaven’s Family—Shepherd Serve, Orphan’s Tear and I Was Hungry—will continue to strengthen the indigenous church in India. We’re making plans for several pastors’ conferences there next year, and we’ll be printing our 500-page The Disciple-Making Minister in four of India’s languages—Malayalam, Telegu, Tamil and Mizo. Those books will be distributed to thousands of Indian pastors to equip them for the harvest. With your help, we’ll also be supporting more orphans, which in some cases will result in a newly-planted church in an unreached village as I described above. Finally, through trusted pastoral contacts, we’ll be meeting very pressing needs of poor Christian widows and the handicapped. If your heart moves you, you can be a part of all three of these ministries in India (and other needy nations) by a monthly investment of $45 in the Heaven’s Family Mutual Fund. For more details, click here. This is an opportunity to lay up treasure in heaven.

By the time you read this, I’ll be in Asia for the fourth time in four months (and learning to live with jet lag.) This time the country is Myanmar, and 18 other team members from across the U.S. and New Zealand are joining me there. Most of the orphans we help through Orphan’s Tear live in Myanmar, and we’ll be visiting them all and bringing them clothing. I’ll also be conducting a conference for 300 pastors. A few of our team members have raised enough money to give bicycles to 65 national missionaries, and we’re also bringing hundreds of pairs of reading glasses for pastors whose Bibles are getting blurry. Best of all, my wife, Becky, and our three children, Charity, Stephen, and Elisabeth, will be joining me for the entire 17 days, a very rare treat for me. This is largely due to a designated gift from some kind folks whom I’ve never met yet. This is going to be a great trip to top off a great year of ministry. We thank God for the many miracles of provision this year and for you, through whom those miracles have come. Please do keep us in mind in your end-of-year giving. We have made many commitments to walk on water in 2006! 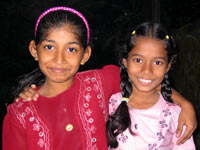