Faces of Jesus Around the World, October 2006

Jesus made it ever so plain that there is a family of people who believe in Him and who are identified by their love for each other—a family that is bound for heaven (see Matt. 25:31-46). That is what Heaven’s Family is all about. God has opened many doors of opportunity for us to show our love for Jesus by meeting the pressing needs of “the least of these” His brethren. In this Ministry Update, you will meet believers from around the world who are benefitting because of your love. On their behalf, thank you so very much. When you stand before Jesus, He will be able to say to you, “I was sick in Kyrgyzstan…I was thirsty in China…I was in prison in Sri Lanka…I was hungry in India and Macedonia…I was a stranger in Turkey…and you loved Me.” As you look at their photographs, you are looking at faces of Jesus from around the world. They’re all beautiful.— David

Clara and Chophan, now on the road to recovery

Clara and her son Chophan live in a dilapidated two-room house on the outskirts of a village in Kyrgyzstan. Three years ago, missionaries John and Beth Carey led them to the Lord and have been discipling them ever since. Clara has always been weak and sick, making it impossible for her to work consistently in order to provide for herself and Chophan. Although the Careys live on very little themselves, they’ve periodically given food to these two baby believers, and this year they paid for medical tests for both mother and son, as Chophan had also become very ill. Clara was diagnosed with blood disease and Chophan with tuberculosis. Heaven’s Family (that’s you!) has now come along side the Careys to provide medical treatment, and both Clara and Chophan are improving, although Chophan must spend six to twelve months in the tuberculosis hospital. His doctor has recommended that he and his mother move from their damp and leaky house when he is released. We hope to help facilitate that. 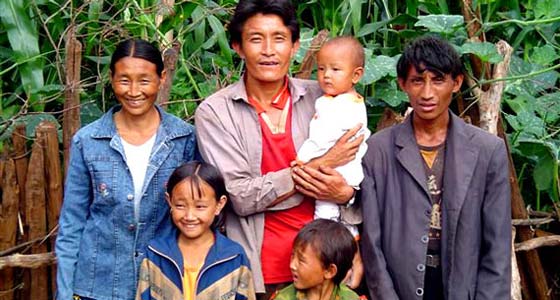 One of three Christian families in a remote Chinese village. (China’s one-child policy is circumvented in villages.)

Above is one of three Chinese Christian families in the village of _________ in ________ Province. The village is very remote, and it can be reached only by Jeep—to where the road ends—and then by two hours of hiking mountainous trails. Three years ago, a missionary and his Chinese friend went to the village and presented the gospel, but no one responded. But recently, that missionary and his friend were led by means of a dream to return to the village, and as they hiked there, they met a man coming from the village who told him that he had dreamed they were coming! Better than that, this man also said that he and his family had believed in Jesus—along with two other families in the village!

The village is extremely poor, and six months out of the year, the villagers must walk several miles to get water. The best solution is to build a reservoir that can collect water during the rainy season that will provide for the village year round. That will also enable the villagers to grow food year round. Our missionary friend has worked out the plans, and the villagers have agreed to provide all the labor. I Was Hungry will provide what the villagers can’t afford—all the concrete. This is a wonderful opportunity to provide a testimony of God’s mercy to the unbelievers in that village, as well as show our love for young Chinese believers.

I Was in Prison in Sri Lanka

How much worse can it get for Arunsalam Pooranam, and her sons Nishanthan and Kamaleswaran? The family survived the tsunami with only their lives, losing house and possessions. They lost a husband and father from a snakebite shortly thereafter. Due to civil war in their part of Sri Lanka, they have been forced to flee and live behind the makeshift walls of a heavily-guarded refugee camp. It is like a prison. They are followers of Jesus.

Through your gifts, we’ve been able to send over $10,000 to help relieve the sufferings of the Pooranam family and other Christian families like them. Thank you. 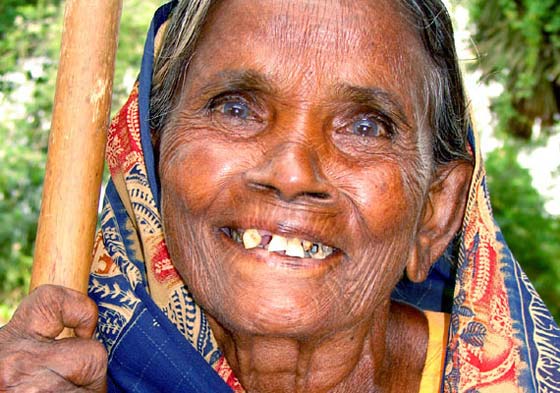 Sister Annamma, thankful for your help in India

Every month, Heaven’s Family provides assistance to sixty widows in India and Pakistan, like sister Annamma above. She is 72 years old and all alone. Her radiant smile hides that fact that she has no home. Like many of the widows that we assist, her children have abandoned her because of her conversion to Christianity. Many widows still need our help for the most basic necessities such as food.

Happy for some spiritual nourishment in Macedonia

Although the two pastors in the photo above are not physically hungry, they are certainly spiritually hungry. They were two of eighty spiritual leaders who attended our September pastors’ conference in Macedonia, Eastern Europe. Every attendee received five books in Bulgarian and will soon receive two more. One of our books, Through the Needle’s Eye, is titled Through the Needle’s Ear in Bulgarian since needles have ears, not eyes, in that part of the world! Heaven’s Family is providing books in the native languages of hungry pastors in many nations. 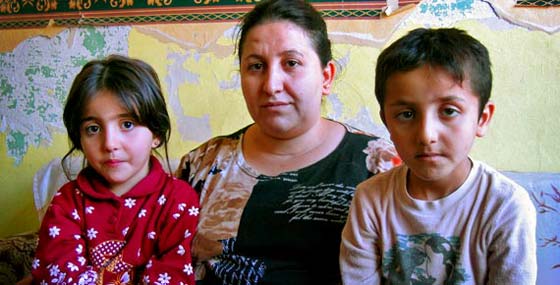 Kawzar Yousif and her two children, Stevana and Stevin

After our Macedonian pastors’ conference, we journeyed to Turkey, where we visited a few of the hundreds of Christian families living in Istanbul who had to flee from Iraq because of escalating and life-threatening persecution.

We were able to provide assistance to some of the neediest Christian refugees, including the family in the above photo. The violent deaths of people every day in Iraq have become just another news item to most of us, but we gained a different perspective sitting in the sub-standard apartment of Kawzar Yousif, whose husband was killed by a car bomb. She wept as she told us about the day when he did not return home from work. He loved Jesus. Although she’s found asylum in Turkey, she is not legally permitted to work, nor are her children permitted to attend school. Thank you for helping to bear her burdens.

If you would like to help with any of the needs presented above, here’s how: To contribute securely by credit card, just click on the appropriate project: 1.) Widows’ Fund, 2.) Books for Pastors, 3.) Where Most Needed. Contributions by check should be made out to Heaven’s Family with the designated project noted in the memo and mailed to: Heaven’s Family, P.O. Box 12854, Pittsburgh, PA 15241. 100% of designated funds received are used towards designated projects, as all administrative costs are paid for by the Heaven’s Family general fund. We are so thankful that God has enabled us to serve you in this way, and we are also thankful for those whose gifts to the general fund make our service to you possible.

Thank you once again for your love. You are glorifying your Father, who has shed His love abroad in your heart (see Rom. 5:5).