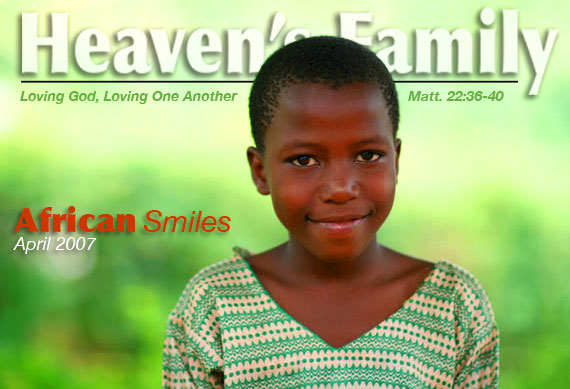 Mariam Evarist lives in Morogoro, Tanzania. Her mother and father both died of AIDS. Just a few days before her mother passed away, she brought Mariam to the Mission to the Homeless Children a Christian orphanage sustained largely by Heaven’s Family. There, Mariam has found a love that has helped her cope with her tragedy. Heaven’s Family is helping sixty-nine other AIDS orphans in Kenya and Tanzania, and I was privileged to visit them all in March.

In this Ministry Update are photos and stories of lives around the world that are being significantly touched by God’s love. Feel blessed as you read, because every good work has been made possible by the grace of God that has transformed you! And there are many opportunities waiting for us to show our love for Jesus by loving the “least of these” among His family. That is what Heaven’s Family is all about. Thanks so much. – David 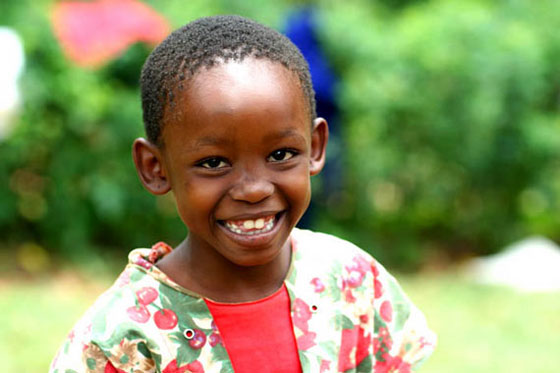 Sofia Thomas, one of thirty-one AIDS orphans finding love at Mission to the Homeless Children

Thirty-one orphans have been rescued from a life of scavenging on the streets through the efforts of Robert Simba, the compassionate founder of the Mission to the Homeless Children. To date, we’ve found sponsors for twenty-four of the children, which means we send $480 per month to MHC. That provides food, rent, clothing, spiritual nurture, and for the younger children, school supplies and uniforms.

Currently, MHC is renting some dilapidated and inadequate government housing. Late last year, God enabled us to purchase five acres of land where they can build a new orphanage building, and as you are reading this, construction is just about to begin.

If you would like to sponsor a child at MHC, go to Orphan’s Tear. Select “Tanzania,” and you’ll see the faces of all the children at MHC who are waiting for sponsorship. 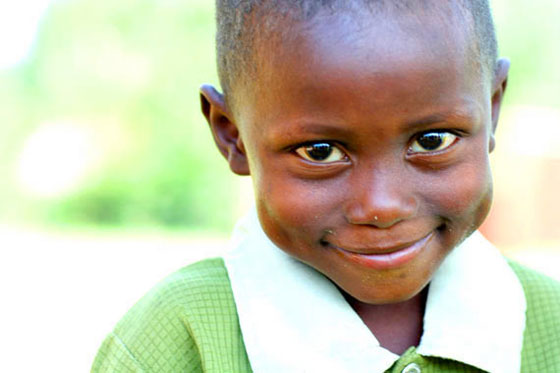 Tony Otenio, waiting for a sponsor at Covenant Kids Home

The other orphanage that we assist in Africa is Covenant Kids Home in Kitale, Kenya. Most of the thirty-eight children who live there are AIDS orphans. We’ve produced a two-minute video interview of the director, Dawson Mudenyo, who talks about what a difference our help has made in the last year. With the very first monthly contribution sent from Heaven’s Family, Dawson bought eight chickens. Those chickens have since multiplied to sixty, and each child at the orphanage is responsible to take care of at least one.

George Otieno and Elizabeth Naliaka. George is taken, but Elizabeth is waiting for a sponsor.

George Otieno and Elizabeth Naliaka. George is taken, but Elizabeth is waiting for a sponsor.

Twenty-five of the AIDS orphans at Covenant Kids Home are still waiting for sponsors. You can be an answer to the prayers of one of these precious children for just $20 per month by going to Orphan’s Tear and selecting “Kenya.” We are also endeavoring to purchase land where CKH can build an orphanage because they will have to vacate their current premises within a year’s time.

Two giraffa camelopardalis reticulata. In Swahili they are known as twiga. Giraffes have seven vertebrae in their necks, the same number as humans, causing some evolutionists to speculate that giraffes evolved from nosy humans who always strained to look over their neighbor’s fences.

Just before leaving for Africa, I sent out an email appeal for two used laptops that were needed by African leaders and friends. I received six! So I carried three to Africa, and now have three waiting for other Christian leaders somewhere in the world. 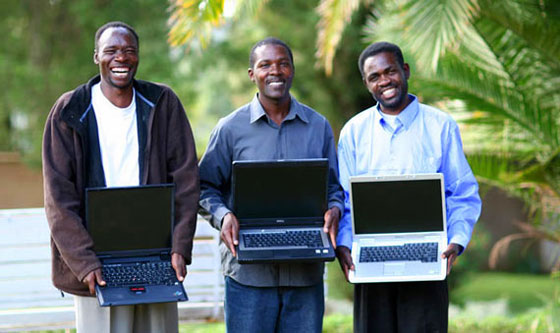 The very happy man on the left, Musa (Swahili for Moses), is a pastor and evangelist who first opened the door for Heaven’s Family to begin working in Kenya. Musa and his family live in a mud house with no electricity, but he can recharge his laptop at the internet cafe that is a half-hour from his village.

On the far right is Dawson Mudenyo. He runs Covenant Kids Orphanag assisted by Heaven’s Family. Dawson has distributed The Disciple Making Minister to English- and Swahili-speaking pastors in ten East African nations, all on his own initiative. He recently visited a former school friend in Mombassa, Kenya a Muslim man and led him to the Lord. That Muslim convert was afraid to attend a Christian church lest his relatives kill him. So Dawson asked him to invite some of his Muslim friends to his house, which he did, and Dawson led most of them to Christ. Now there is a house church in Mombassa consisting of seven former Muslims!

In the middle is Gideon Ochieng, a very talented young man who has caught our vision for East Africa, and who will be helping us fulfill our mandate there to equip Christian leaders and care for the poor.

All three of these devoted servants will be using their laptops to further God’s kingdom. If you have a used laptop you would like to donate, we are always receiving requests for them from Christian leaders in many countries where we work. Visit the Laptops for Pastors’ Fund for details. 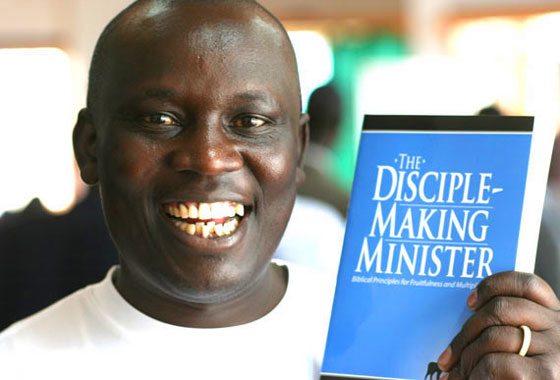 A very happy Benjamin Tanguli, missionary to Sudan’s Dinka tribes, at our Kenyan conference. He is helping us translate The Disciple-Making Minister into Dinka, the language spoken by southern Sudan’s largest tribe.

It was very easy to teach the pastors who attended our March leadership conference in Kitale, Kenya, because it began with the glowing testimonies of pastors whose ministries had been dramatically changed from reading copies of The Disciple-Making Minister a year ago. One of those pastors has since planted ten house churches! All one-hundred pastors left the conference with their own copy of the book, either in English or Swahili.

Associate Minister Chuck King traveled to Eastern Europe in March for a landmark event in Ukraine. The Russian version of The Disciple-Making Minister was distributed for the first time to Christian leaders at Rivne Spiritual Seminary where Chuck ministered.

The young man in the photo on the left was saved during Chuck’s street preaching in Ukraine in 2001. Now he is a pastor! And the family in the photo of the right has been dramatically transformed since they received the Lord last year. The father was a drunk, a car thief, and a bully who beat up his in-laws because they opposed his marriage to their daughter! They are struggling financially, and Chuck was able to give them some cash and a suitcase full of coats and blankets. Chuck was able to help several struggling Christian families because of your help.

To all our friends in Louisiana, we hope you can join us at our April 20-22 Family Reunion just outside of Baton Rouge. We’ll be enjoying good food and fellowship, and I’ll be teaching through some of Jesus’ parables. Contact us to ask for all the details.

God Grew Tired of Us…Coming to Your Church or Home Soon!

I sent an email to everyone in March recommending a film that chronicles the journey of three of the “Lost Boys of Sudan,” two of whom are our personal friends (You can learn more about the Lost Boys from our website). One of them, Panther Bior, was given a copy of the film, and he is permitted to show it as along as he is present at a showing.

So we are lining up churches and home groups that would like to invite Panther to show the film in which he is a star! All we ask is that you take care of his transportation to your showing, and receive an offering to help him with the immigration of his wife and younger brother (whom I just spent time with in Nairobi) to the U.S. For more information, email us. Narrated by Nicole Kidman, God Grew Tired of Us won the Documentary Grand Jury Prize and Audience Award at this year’s Sundance Film Festival.

Finally…How about a Spring Cleaning for Jesus?

Jesus told all His followers, “Sell your possessions and give to charity; make for yourselves purses that do not wear out, an unfailing treasure in heaven” (Luke 12:33). All that stuff that you never use in your basement, attic, and closets could be in heaven and be used for the Kingdom!

Thanks for making March a fruitful month for Heaven’s Family. Please continue to help us in April as we serve Jesus by loving “the least of these” among His family. 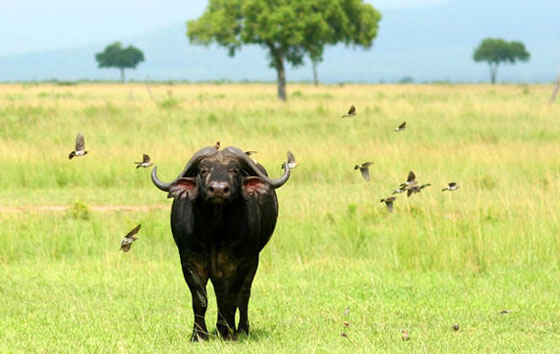 A flock of birds, one of which recently evolved into an African buffalo. (Note how the former wings evolved into wing-like horns.)