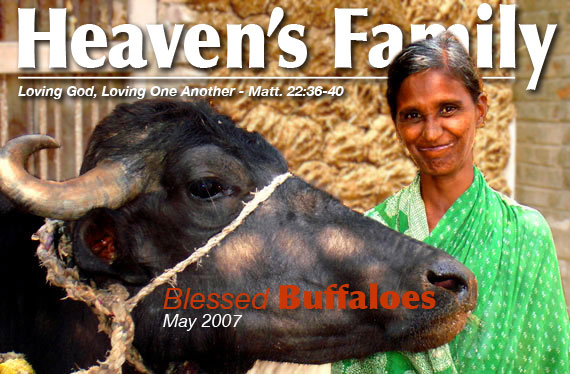 Indian Widow Kurma Chinnamma with her new source of income, a buffalo

Kurma Chinnamma is a follower of Jesus who lives in rural India. Her husband deserted her and their two children eight years ago, and she has been weak because of an undiagnosed disease, and perhaps due to malnutrition. Consequently, she has been unable to work in the fields to support herself and her two children.

In April, however, Heaven’s Family (that’s you!) provided her with her own buffalo (a $350 animal), which yields five quarts of milk each day. She and her children will drink some and sell the rest, providing her a small but steady income. She also uses the dried buffalo dung (which you can see formed into patties and dried on the wall behind her in the above photo) for cooking fuel, a common practice in India (and in the Bible…see Ezekiel 4:15).

Last month, Heaven’s Family provided buffalos for four Indian widows like Kurma, as well as funds for other widows to start their own businesses. More details are found in this Ministry Update, along with reports of four other God-blessed April projects. Rejoice as you read! Every bit of fruit is proof of your faith in our Lord Jesus. We want to hear Him say one day, “I was hungry, and you gave Me something to eat” (Matthew 25:35). David

Blessed Buffalos
The Widows Fund at work in India 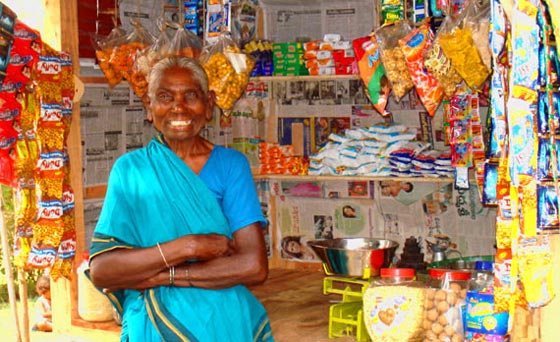 Popuri Bapamma, a seventy-five-year-old widow, started her own Indian “department store” for just $250!

Did you know that if your net worth is $2,200 or more, you are in the top half of the world’s wealthiest people? To be among the richest 10% of adults in the world, all you need is a net worth of $61,000. The three richest people in the world”Microsoft Chairman Bill Gates, Mexican telecom mogul Carlos Slim Hel, and investor Warren Buffett”have more money than the poorest 48 nations combined.

Half the world, nearly three billion people, live on less than $2 a day. And those kinds of people often have very little or no net worth. They certainly have no capital with which to start a business that could provide them with an income. So they generally are subsistence farmers or day laborers.

But for some of the world’s poorest, things can get worse”such as when a woman with small children becomes a widow. If she becomes ill and unable to work, things become worse yet. She is forced to rely on the kindness of her impoverished relatives. But things can become even worse. If she is Christian in India and her relatives are Hindu, she is likely already an outcast.

Last month, eight Christian widows in rural India started small businesses with grants from Heaven’s Family. Four received buffalos. You can see some of their smiling faces in the photos below. Their circumstances have dramatically changed, and they are boldly testifying to their Hindu neighbors of God’s love and compassion for them through Jesus Christ! They’re rejoicing that they, and you, are part of God’s family. On their behalf, thanks so much.

The Lord protects the strangers; He supports the fatherless and the widow (Psalm 146:9).

Tribal Bibles
The Bibles for Believers Fund at work in Vietnam 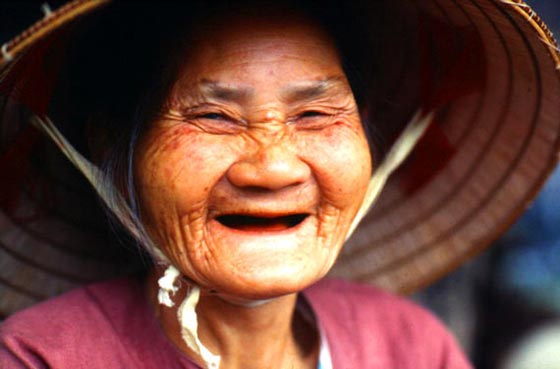 A Vietnamese follower of Jesus

When South Vietnam fell to communism in 1975, all western missionaries were expelled. Many had labored for years translating the Bible into languages used by tribal groups in southern Vietnam groups that range from one million people to just a few hundred who are clinging to their culture. Over the decades that followed the Vietnam war, tribal believers continued to spread the gospel in the jungles with great success. Yet they are among the poorest and most persecuted Christians in Vietnam, and very few have ever owned a Bible in their own language.

Recently, however, an unprecedented window of opportunity has opened to print tribal-language Bibles legally inside of Vietnam, something that has been illegal for decades. This may be only a temporary opportunity as the Vietnamese government seeks entrance into the World Trade Organization.

Using contributions to the Bibles for Believers Fund, in April Heaven’s Family funded the printing of five-hundred New Testaments in the Bru language. Bru is spoken by about 137,000 tribals living in mountainous regions of Vietnam and Laos, among whom there are about 14,000 believers. Partnering with Paul Hattaway and Asia Harvest, we now have the opportunity to help print thousands of Bibles and New Testaments in other tribal languages as well, including Stieng, Jeh, Koho, Mhong, Bahnar, Hre and Choro. (And if you’ve never read Paul Hattaway’s book, The Heavenly Man, you’ve missed one of the most inspiring Christian books in print!)

Tragically, the small facility rented by Christ’s Family Orphanage in Pakistan was destroyed during the Mohammed cartoon riots last year. But thankfully, all of the children, most of whom lost their parents in the October, 2005 earthquake, were away at school when it happened. They have since been sent to live temporarily with Christian families.

The founder of the orphanage, a dear friend of mine, liquidated all his assets—including his wife’s wedding jewelry and purchased a tract of land. Then he started building an orphanage by faith. Above is the architect’s rendering of that building (without the high security wall that will surround it). But when his money and credit ran out, construction came to a screeching halt. Very little of the actual building had been built.

However, over the past few months the Lord has enabled us to send $30,000 in construction funds, and the new building is nearly completed, as you can see in the photo below.

Compare this photo with the architect’s rendering above

Also, in April a wonderful ministry in Pittsburgh began monthly sponsorship of twenty-five of the Pakistani orphans. That means that 77 of our 115 Pakistani orphans are now sponsored, and we can send Christ’s Family Orphanage $1,540 each month, which provides food, clothing, shelter, school fees and Christian nurture. Thanks for making these miracles possible.

Equipping 18,000 Pastors in Europe, Asia and Africa
The Books for Pastors Fund at work 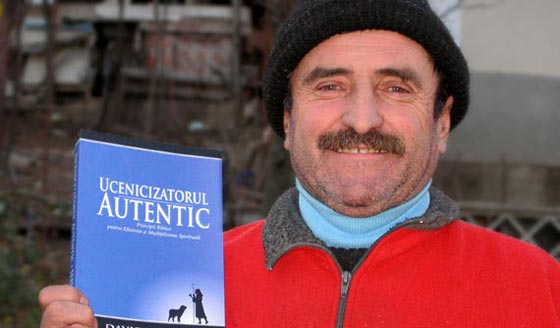 Moldovan church planter Nicolae Bodea with a copy of the Romanian version of The Disciple-Making Minister. He was such an incorrigible character before his salvation that it took his wife a year to believe that he’d changed for good!

Although it may not appear to be so, we are doing considerably more than ever to equip Christian leaders around the world. Two new translations of our five-hundred-page equipping manual for Christian leaders, The Disciple-Making Minister, were printed in April. One-thousand Polish copies were printed in Poland, where associate minister Chuck King and I will be conducting a pastors’ conference within days. And fifteen-thousand Chinese copies, our largest-ever printing, came off the presses in mainland China.

Both printings involved unusual “circumstances” and wonderful favor that I don’t have space to tell you about. The fifteen-thousand Chinese TDMMs are now being distributed to house church leaders in fifteen of China’s twenty-three provinces. The need is very great there, as one-fifth of the world’s people live in China, and there are hundreds of thousands of underground house churches. We so much appreciate the help of Dennis Balcombe and Revival Chinese Ministries International in Hong Kong for their enthusiasm and help with this project.

April also saw the reprinting of two-thousand English TDMMs in Nigeria, Africa’s most populous nation. One out of every five Africans is a Nigerian. Those two-thousand books will be distributed to pastors all over Nigeria, where there is a great need for biblical leadership training. Thank you for helping us equip eighteen-thousand pastors in April! 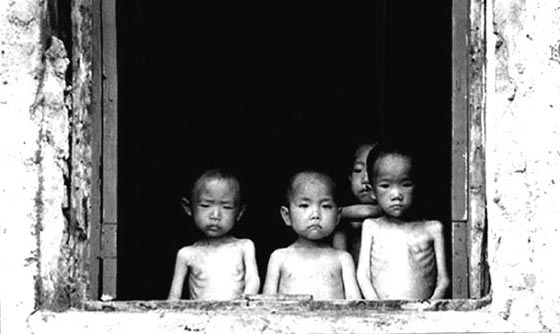 When the communist authorities in North Korea, often referred to as “the hermit kingdom,” actually admit that their country is facing a food crises and request the world’s help (as they have done recently), you can be sure that millions of people are already starving. Although the means must be kept secret, in April Heaven’s Family helped provide tons of corn that was smuggled into North Korea to feed starving Christian families” who live in one of the world’s most repressive countries.

For this project we partner with our friends at Alpha Relief, with whom I’ll be in China this September. They recently sent me the following report:

Crouched together on the floor sharing a meal, we were introduced to Yung Sook, a North Korean Christian. Yung Sook was in her late 60’s and was the typical grandmother figure who makes you feel right at home. We were told that Yung Sook had experienced first hand the brutality and paranoia of the North Korean government.

She had been a friend of Kim Jon Il’s (North Korea’s leader) wife. One day she made a passing criticism of the North Korean leadership. She was later reported to the secret police for her comment and sentenced to eight years in a forced labor camp. Her sentence was also extended to her entire family which included her elderly parents, husband and four children.

Working long hours in extreme weather conditions and appalling living conditions, Yung Sook lost both her parents to starvation. She also lost two of her sons; a three-year-old who drowned and a twenty-three-year-old who was shot. Only Yung Sook would be released from the prison after completing her eight-year sentence. The state of the rest of her family remains unknown to this day.

Despite all this, Yung Sook continues to play a significant role in the North Korean Christian leadership reaching out to other North Koreans in sharing the love and hope found in Jesus.

We hope to do more to feed our suffering family in North Korea.

To all our friends in the Northeast of the U.S., we hope you can join us at our May 18-20 Family Reunion in Horseheads, New York, (not far from Corning, in the Finger Lakes region). We’ll be enjoying good food and fellowship, and I’ll be teaching through some of Jesus’ parables. Contact Wayne at [email protected] for all the details.

Sermon on the Mount Video Series

Four half-hour segments of the Sermon on the Mount Teaching Series, filmed in Israel, are now posted at ShepherdServe.org. Just click on “Videos” on the home page. In “Episode Four” you can hear me explain, while swimming in the Dead Sea, why the Dead Sea is not totally dead!

One of my concerns these days is that some who have been helping Heaven’s Family might think their assistance is not needed in light of God’s blessing on the ministry. The truth is, the needs and opportunities that are coming our way far exceed our resources. If our ministry income immediately increased ten-fold, we could use the funds immediately to meet valid pressing needs. We must turn down many more opportunities than we accept to serve orphans, widows, refugees, pastors and others. So please don’t think that your help is no longer important. It is. We love to serve as your love-link to some of the “least of these” among Jesus’ world-wide family.

I failed to mention in this update that I spent seven days in April serving pastors in Cuba. And as you read this, I’m on my way to France to teach at a weekend “Family Reunion,” then to England to take steps to obtain charity status for Heaven’s Family there, and then to Poland to teach at a pastors’ conference with Chuck King. Thanks for your prayers while we’re gone through the 14th.

P.S. Forwarding this Ministry Update to your friends along with your recommendation is often the beginning of blessings for “the least of these” among Christ’s family. Thanks so much. 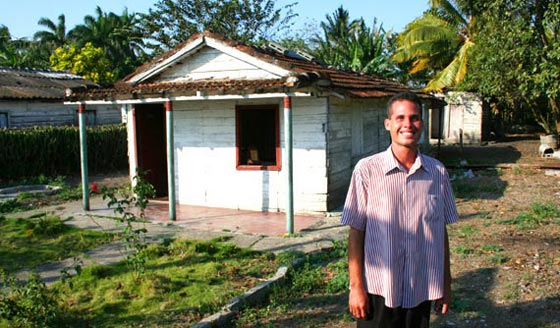 This young Cuban pastor is standing in front of his house that is also his church. We bought it for him for just $500!