Siberian Man with a Vision, August 2007 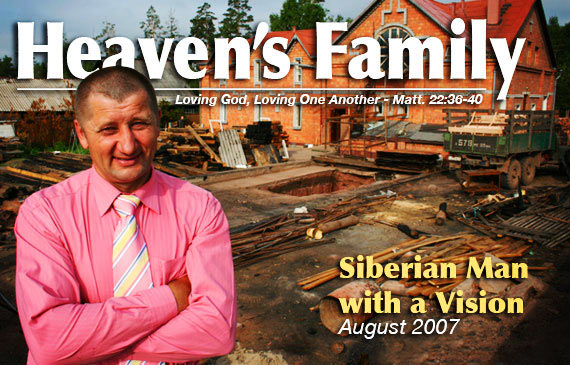 Siberia, which makes up 77% of Russia’s vast territory, has one of the lowest population densities in the world. In the city of Bratsk, in the dead of winter, the sun rises at around nine in the morning and sets around four in the afternoon. Temperatures often drop to minus 40 degrees. Snow covers the ground for six months. I felt led to visit in July.

There I met and ministered to tough Siberian pastors who are working hard to build God’s kingdom. One of them is pastor Vladimir Yudin. He and his wife, Helena, have eleven children. They, like many Siberians, live in a small, sparsely-furnished house made from logs. Outside, the Yudin family has a big garden, two cows and some chickens. 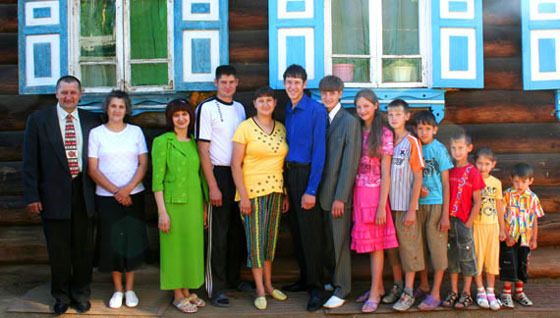 Pastor Vladimir, his wife, Nelie, and their children, Julie, Alesky, Lyuba, Misha, Ivan, Tanya, Vova, Kostya, Kolya, Kristina and David. The three oldest children
are married and have children of their own, making David an uncle.

Like many of the fifty pastors whom I met, Vladimir not only oversees a church, but also heads a Christian drug rehab. His highly-successful Christ-centered program requires a one-year commitment from every resident. Listening to the amazing testimonies of the current seventeen residents brought tears to my eyes. Most had been addicts for at least ten years. Many had spent time in prison. One intentionally overdosed to escape his misery but woke up in a morgue! All have been born again since coming to the center and have been drug-free for months. They really love God and each other.

Just a few months ago, the rehab dormitory behind pastor Vladimir’s church mysteriously burned to the ground, just like another church-based rehab in his city. Some people don’t like what he and other pastors are doing, because the relatives of the former drug addicts are getting saved when they witness the amazing deliverance of their family members. The churches are growing as a result. Evangelicals, considered a “sect” in Siberian society, are gaining some respect for the first time.

Since their dorm was destroyed, the rehab residents have been sleeping in the church balcony and sharing a small apartment. The Sunday before I met Vladimir, his church board had made the decision to start rebuilding the destroyed dormitory even though they only had a small amount of money. Before long the snow will be falling, and when that happens, it is impossible to build in Siberia. So they would build by faith. They prayed that God would provide soon.

As I heard this story, I knew the $2,000 from Heaven’s Family I had brought with me was the beginning of the answer to their prayers. It was a joy to look into pastor Vladimir’s face when I pulled it out and gave it to him. He said that this time they would build, not with wood, but with concrete blocks. The new dorm will be fire-proof.

The rehab residents will themselves provide all the labor (work is an integral part of the rehabilitation program), and so the entire two-story, 1,600 square-foot building can be built for a total of just $10,000. I assured pastor Vladimir that God can rebuild what the devil destroys. And I promised him that I would tell my friends about his vision. 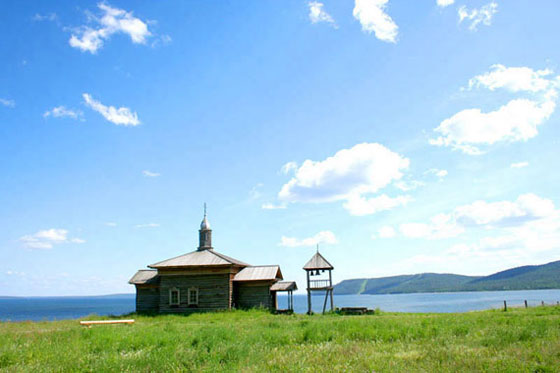 This log-built Russian Orthodox church was constructed around 1865. Christianity first came to Russia in A.D. 988, when Prince Vladimir “converted” in order to gain his eighth wife (he also had 800 concubines). He then forced everyone in Kiev to be baptized under threat of death. On a better note, the Cyrillic alphabet that is used to write the Russian language is derived from an alphabet created in the 9th century by missionary brothers Cyril and Methodius, who borrowed some characters from Greek and Hebrew and invented a few more in order to teach the Slavic people about
Jesus. 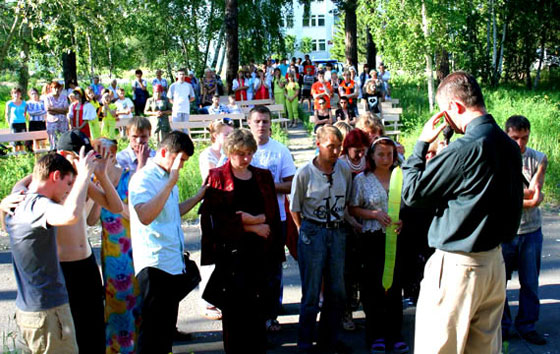 I was invited to Siberia by my friend Viktor Koroteyev, a Russian immigrant to the USA and an evangelist who calls people to repentance. While we ministered together in Siberia in July, Viktor not only preached the gospel in churches,
but also outdoors, and people came to the Lord every time. 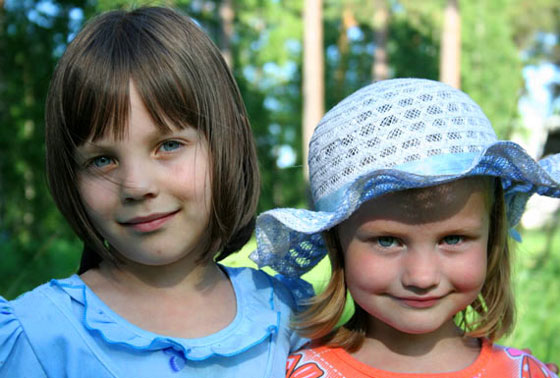 These are two short people who attended one of Viktor’s evangelistic outreaches. Although they appeared to be hardened sinners, I was delighted to discover that
they already knew the Lord. 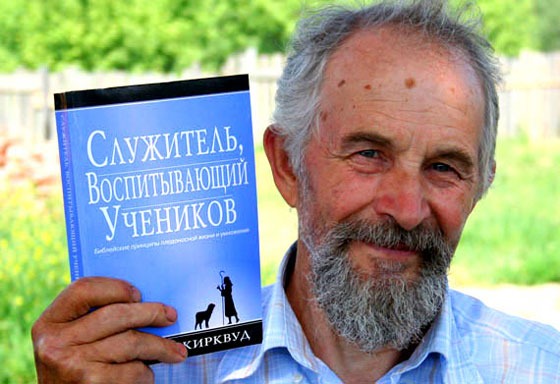 While in Siberia I conducted pastors’ seminars in the cities of Irkutsk and Bratsk. All fifty pastors who attended received a copy of the Russian translation of our 500-page book, The Disciple-Making Minister. The pastor in the above photo, Ivan Kachan, spent ten years in prison for preaching Christ during the communist era. It is estimated that between 1920 and 1990, 500,000 Christian leaders were imprisoned in Russia and
200,000 were martyred.

There is never enough space in our monthly updates to tell you, in detail, every good thing that is being accomplished through your compassion, so I generally try to highlight a few of our projects from the preceding month. But this month, please allow me to list much of what Heaven’s Family was doing in July. You’ve made all of these good things possible:

3.) Provided a laptop for a strategic Polish pastor.

4.) Provided funds for a ministry to lepers in India.

5.) Provided funds for missionaries in Kyrgyzstan and Romania.

6.) Provided funds to assist eight Myanmar orphanages that have no sponsored children.

7.) Coordinated (as we do every month) the translation, printing, and distribution of The Disciple-Making Minister to Christian leaders in numerous nations around the world.

8.) Provided funds to
help a national evangelist in Kenya.

9.) Provided funds to help complete our medical clinic in Myanmar.

10.) Provided funds to sustain forty widows in India and Pakistan.

11.) Provided funds for a Christian drug rehab center in Cuba.

13.) Provides buffaloes for three widows in India to help sustain them (see photo below).

15.) Provided funds to bring a Ugandan boy named Walter to the U.S. for life-saving surgery.

16.) Provided funds for life-saving surgery for a pastor’s wife in the African nation of Burundi.

17.) Assisted two Burmese refugees who have recently relocated to Pittsburgh after living for eighteen years in a Thai refugee camp.

18.) Helped find housing for seven Thai men in Pittsburgh who were being exploited by their employer.

20.) Sent construction funds to two of our orphanages of the ten that have new buildings under construction.

21.) Provided monthly support for over seven-hundred orphans in six nations.

July was a typical month for Heaven’s Family, and for all these blessings we give thanks to God for His grace in you! For information about how you can help in August with any of our ongoing projects that benefit the poor among Christ’s family, visit I Was Hungry. Contributions generally slow down in July and August, but the needs never do, so we’d really appreciate your help this month. Thanks so much. 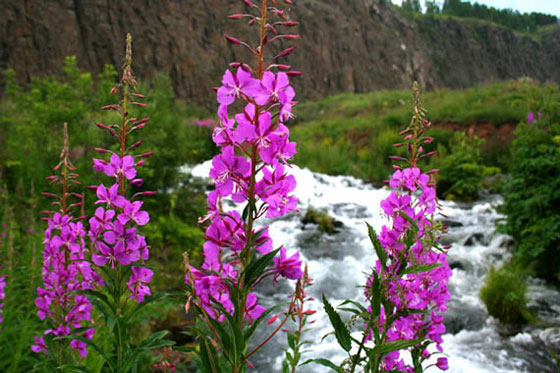 I don’t know what kind of flowers these are, but they were everywhere in Siberia,
testifying of God’s glory