I Was Hungry and Thirsty in Kenya, September 2007 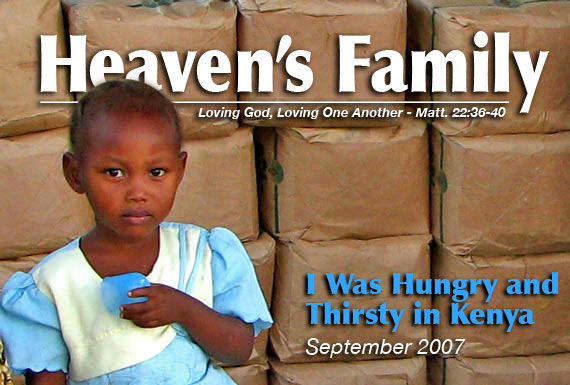 Maria Sikukuu stands before bags of corn meal. Her village, Banga, will also soon have pure water from a new well.

I don’t know how I missed it for so many years of my Christian life: Christians are supposed to be caring for the poor, especially the poor among our own spiritual family. If we aren’t, Jesus said it proves that we aren’t part of His family (see Matt. 25:31-46).

In light of Jesus’ very clear teaching in Matthew 25 and in so many other places in the Gospels, it is amazing that so many churches collect money every Sunday and give nothing—or just a token percentage—to the poor. It is equally incredible that professing Christians aren’t literally searching for poor believers whom they can help. They aren’t hard to find—if you just look in Africa, Asia or Latin America.

Through the I Was Hungry division of Heaven’s Family, and because of your genuine faith, we’re doing our best to do just what Jesus commanded. God has opened doors for us to meet pressing material and spiritual needs in many places around the world, but in this update I’ve mostly focused on details of our recent ministry in Kenya. I’ve also highlighted one project, among many that we’re involved with, from the Orphan’s Tear and Shepherd Serve divisions of Heaven’s Family. Thank you for opening your heart to your spiritual family. They will surely thank you in Heaven! — David 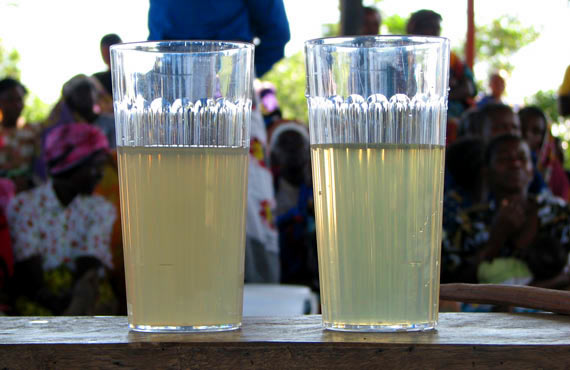 Would you drink this water? This is what they drink in the village of Banga, Western Kenya.

In July, Heaven’s Family associate minister Chuck King, along with a team of eleven other Americans, traveled to three remote and draught-afflicted villages in Eastern Kenya. They brought with them $6,000 worth of basic foods, $1,000 worth of Pur Water Purifier Packets, and the Word of God. They left behind lots of joy.

Chuck’s team was often greeted by joyful women doing traditional African dances. Those happy women would wait in line to receive beans and rice poured into their aprons. Chuck said that some of his team members wept as they witnessed women sifting through the dust at the end of a food distribution—in order to gather the few beans and grains of rice that had spilled to the ground.

Chuck’s team also demonstrated to the villagers how to use the water purification tablets they had brought with them. All three villages only had mud puddles from which to drink. (Did you know that five million people, mostly children, die each year from water-borne diseases?)

In the three photos above you can see the water-purification process as Chuck demonstrated it in the village of Mwangaza.

Chuck first adds one Pur Water Packet to 2 and 1/2 gallons of unsafe water, and over the next five minutes a chemical reaction takes place so that the dangerous elements coagulate and settle to the bottom in a brown sludge. The clear water is then poured through a cotton filter into a clean container to remove any floating particles. Twenty minutes later, the water is safe to drink. 99.9% of all the bacteria, viruses, and parasitic cysts like giardia and cryptosporidium are killed, and DDT and arsenic are also removed. It only costs about 10 cents per day to provide clean drinking water for a family of five persons.

Chuck’s team was so moved by the living conditions of the people of Banga that they came up with $5,000 from among themselves to drill a bore hole that will provide on-going clean water. 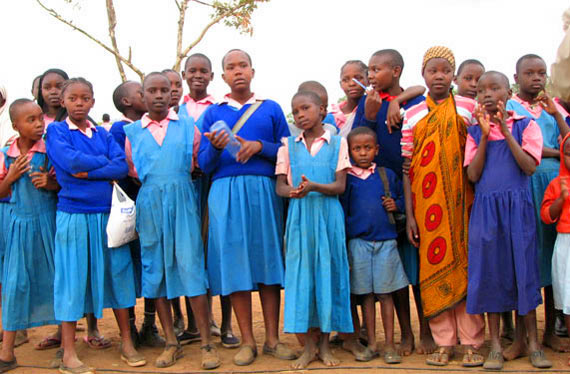 Some of the children of the village of Kibwezi, one of the three villages where Chuck’s team served.

Along with all of these efforts to meet pressing material needs, the team conducted many meetings in churches and in the marketplaces, with preaching, testimonies and dramas.

I’m happy to report that Heaven’s Family representatives also continue to minister to tribal war refugees in Eastern Kenya as well. Three hundred families and hundreds of abandoned or widowed women were recently served with food supplies and the gospel. Your compassion has made this possible. Thanks so much. 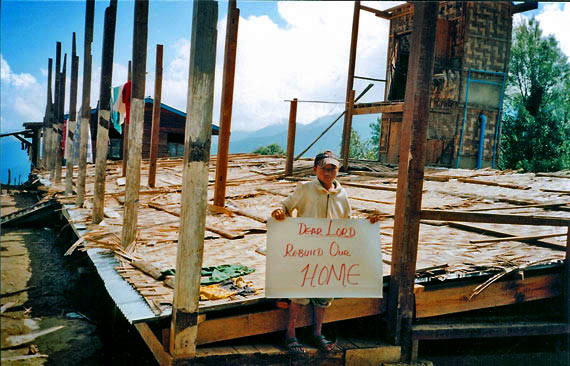 We are currently involved in construction projects for twelve of our orphanages in Myanmar, Tanzania and Pakistan. One of them, Christ Home for the Needy, is pictured above. It is a long story, but this Christian orphanage was dismantled by order of the Buddhist-dominated Chin State Government in Myanmar on a legal technicality. Now, due to some international media pressure, a new building permit has been issued. The only question is whether or not the orphanage director can come up with the $14,000 he needs to rebuild. We’ve recently been able to provide $5,000 to help new construction begin and are praying for the remaining $9,000.

Most of the eighty orphans at Christ Home for the Needy are now living in harsh conditions under tarps during the rainy season. It is heartbreaking.

Our greatest need right now are for funds to complete the twelve orphanages that we currently have under construction, including Christ Home for the Needy. Will you help? 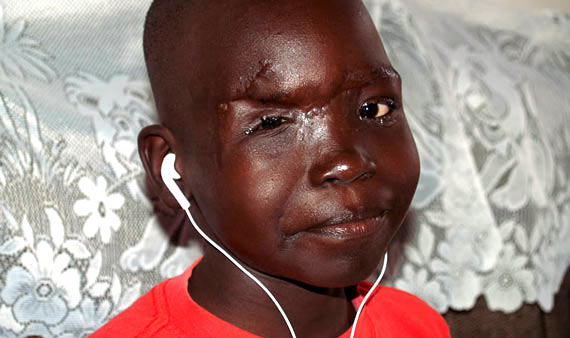 Walter, now improving in the U.S. and enjoying his new iPod

Most of you received my June email appeal to help bring to the U.S. a little Ugandan boy named Walter. Walter had lost his right eye to a gunshot wound he received in his face as he was fleeing from LRA soldiers. (He had just witnessed his parents being shot and his older sister raped, doused in gasoline, and set on fire.) Walter’s life was in danger again due to a serious infection in his eye sockets and a growing tissue mass in his eye cavity, and he could not receive the help he needed in Uganda.

I’m happy to report that Heaven’s Family partners gave generously, and Walter is now receiving care at Children’s Hospital in Pittsburgh. His infection is clearing up, and he is now waiting for surgeries during which he will undergo reconstruction of his sinus cavity, tear duct and eye lid. Walter will also receive a new prosthetic eye. Thanks for making this happy ending possible.

Alaska–my kind of place to teach when it isn’t raining and when the mosquitoes aren’t biting!

In August I spent two weeks with my son, Stephen, in the wilderness of Alaska, video taping some teaching through a number of Jesus’ parables. We slept in the back of a friend’s four-wheel drive pickup truck and ate wild blueberries. Facing the frustrations of bad weather, bugs, sickness, and camera malfunctions, we still succeeded in filming ten half-hour programs. You can view one of the Parables of Jesus on our website. The other nine will be produced in the coming months.

To all our friends in the Pacific Northwest, please join Becky and me in Rainier, Washington, for our next “Family Reunion,” the weekend of September 28-30. I’ll be teaching Friday evening through Sunday evening. Email us for details.

A few of the saints we’ve served in China

By the time you read this, I’ll be on my way to China. We’re involved with three significant projects there. One of them is the second printing of the Chinese version of The Disciple-Making Minister. We’ve already distributed 15,000 copies to underground house church leaders, and demand is increasing. I’ll have news about the other projects next month. Your prayers are greatly appreciated, as September is a very busy month. I was only home seven days in August, and I will be home only seven days during September as well. I’m missing my family, and they are missing me.

On behalf of those whom we serve together around the world, thanks so very much. It feels so good to experience the assurance that comes when you serve the “least of these” among God’s family!