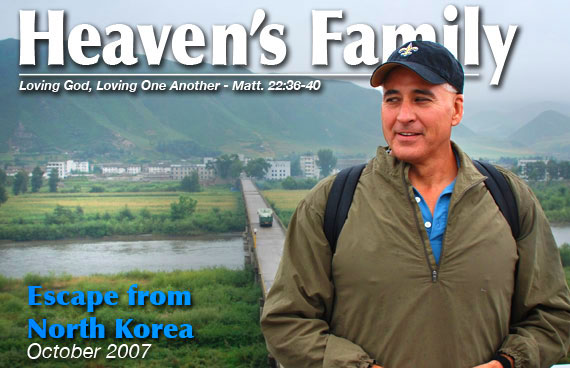 Teryl Hebert poses for a “tourist photo” at the very moment a truck loaded with five tons of flour crosses the Chinese border into communist North Korea—to feed starving Christians there.

North Korea has been making headlines lately due to its food crises and the nuclear ambitions of its egocentric dictator, Kim Jung-Il. Many people don’t know, however, that as many as three million people—thirteen percent of North Korea’s population—have died from starvation in the past ten years living in Kim Jung-Il’s communist
utopia.

North Korean soldiers shoot to kill citizens who try to escape across the 880-mile border with China. Those who succeed with escaping must then hide from Chinese police. If discovered, they are turned over to North Korean authorities, where they face
punishments of imprisonment, torture and execution.

Christians, in particular, are considered to be enemies of the state. Individuals who are
caught with a Bible are imprisoned without trial and often executed.

Because of your concern, Heaven’s Family has been helping fund food shipments into North Korea to feed starving Christians. Last month, I not only witnessed a food shipment cross the border, but also visited a safe house in China where Christians who have escaped from North Korea are hiding.
Details and photos follow below.

Thanks so much for helping us to reach out in North Korea and China, where 1/5th of the world’s people live. We have much more work to do there. — David 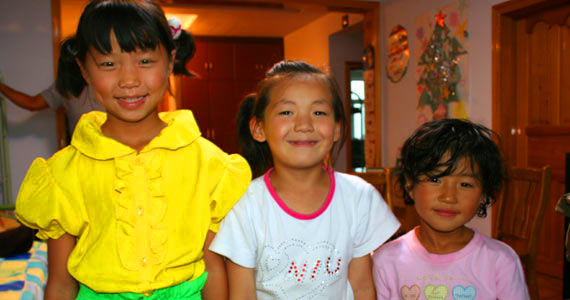 Left behind: Three North Korean girls whose parents were caught inside China and returned to North Korea.

In a small apartment in China’s Jilin Province live a Christian couple—Mr. & Mrs. Chang—and six beautiful children whom they have taken into their home. The children and their birth parents all succeeded in escaping from North Korea. Tragically, however, their parents were discovered (the children were not) by Chinese police and turned over to North Korean authorities. None have been heard from again and are assumed to have died in prison or been executed.

The children, left behind in China, were rescued by believers. They would have otherwise been forced to live on the streets. Through the amazing faith and love of Mr. & Mrs. Chang, along with some legal miracles, all six children are being raised to serve the Lord in an atheistic nation that generally allows each family to have only one child.

You can view the two-minute video, North Korea Christians, of my visit to a safe house in China where eight North Korean Christians are currently hiding. Please pray for them. That video also includes footage of a shipment of five tons of flour being taken across the Chinese border into North Korea for starving Christians. Naturally, all of the means necessary to accomplish such a ministry cannot be revealed. But it would never happen apart from caring Christians in China and Western nations. Thank you for caring. 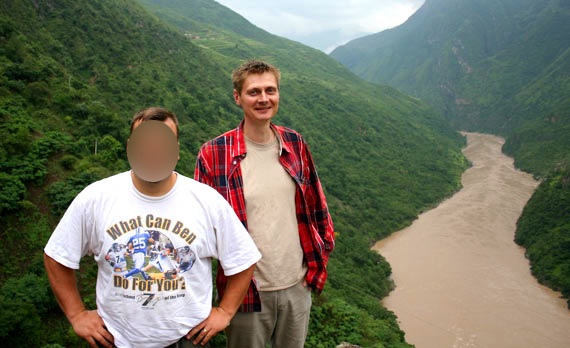 The large majority of China’s 1.3 billion people are Han Chinese. But there are hundreds of other ethnic groups that live in China—with names like Lisu, Naxi and Yi—and most of them reside in Yunnan Province. Two friends of mine, Sam and Seth, who live in Yunnan, regularly trek into remote villages to share with people who have never heard of Jesus. Those who believe are discipled (although the exact means cannot be revealed).

One village—where my missionary friends have led three Lisu families to the Lord—requires a nine-hour drive on paved roads and a two-and-a-half hour drive on dirt “roads” to the middle of nowhere. From there the village is a two-hour hike on a narrow and often steep mountain trail. In September, I joined Sam and Seth on that long journey, along with one of their Chinese co-workers and two other Americans.

The greeting committee: Our first stop was the village’s simple elementary school. These kids don’t see Caucasians very often, so they were a little shy at first, until we started taking their pictures and showing them their photos.

When Sam and Seth first visited this particular village some years ago, an initial receptivity turned into cold rejection due to persecution from local authorities, and so my discouraged missionary friends lost hope. But three years later—encouraged by the repeated dream of a Chinese co-worker that instructed them to return—they made the long drive back to the middle of nowhere and started up the path to the village. But as they hiked, they were met by one of the villagers—Mr. Shan—coming the other way. He told them that after their previous visit, he and his family, and two other families, had decided to believe in Jesus. And he had dreamed the night before that the missionaries would soon return!

When we arrived in Mr. Shan’s village, he was away for the day, but we were able to meet his wife, who shines with Jesus. Mrs. Shan fixed us a meal in a kitchen that is impossible to describe, and Seth, Sam and their Chinese co-worker spent several hours sharing the Word with her and her brother-in-law who has also professed faith in Jesus.

When Mrs. Shan’s brother-in-law arrived at her house, he was carrying his sleeping son on his back. As members of the Lisu ethnic group, China’s government allowed him and his wife to have two children. Two girls were born to them. Like all other Chinese couples, they wanted a boy so they would have someone to take care of them in their old age, as that is the traditional responsibility of Chinese sons.

So they conceived again and God gave them a boy, but they were fined the equivalent of almost $3,000 by the Chinese government. To them, that is an enormous amount of money that will take years to pay. They have been wavering in their faith as there is no pastor in their village to encourage them, and they are being persecuted. They told us that not long ago twenty Chinese police hiked to their village and threatened them because of their contact with Christian foreigners.

The Shan’s village only has water running nearby about six months of the year. During the other six months, they must hike down to the Yangtze River, far below, to get their drinking water. Carrying sufficient water up the mountain to grow crops is out of the question. And they must live up high on the mountain because there are no lower spots that are level enough to grow crops. The government restricts them from moving elsewhere. So life is very difficult.

We raised enough money last year to supply concrete for a large water reservoir, and the villagers are enthusiastic about being able to grow crops year round with the surplus water a reservoir would provide. But local communist authorities will not grant permission to construct the reservoir, apparently expecting a bribe first. Please pray for this situation to change. A reservoir provided by Western Christians via the three believing families in the village would be a continual testimony of God’s love for all of them. 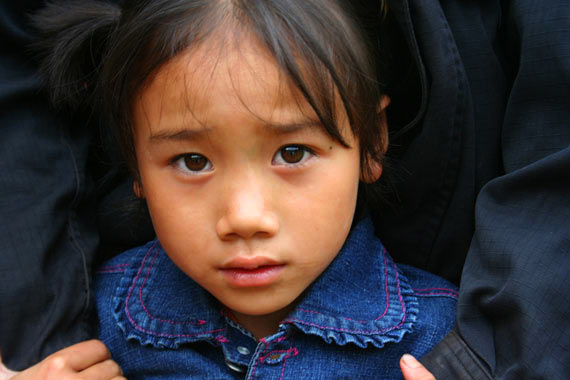 A village child: Safe in her father’s arms, and needing to learn about a Father who is in Heaven.

Watch the
two-minute video, Sam and Seth, about Sam and Seth’s incredible ministry in China.

On my way home from China, I stopped off in Hong Kong to visit legendary missionaries Dennis and Kathy Balcombe. They’ve been serving in Hong Kong for 38 years, planting a large church there, and are loved and appreciated all over China because of all

Through his extensive connections to Chinese house church pastors, Dennis has helped us distribute 15,000 copies of our 500-page equipping manual, The Disciple-Making Minister, in Chinese, to Christian leaders all over China. This has only caused the demand to increase. While I was in Hong Kong, 20,000 more copies came off the press. They will soon be in the hands of hungry pastors all over China. Dennis Balcombe says that we’ll need tens of thousands of additional copies to cover the existing need.

Dennis Balcombe on the right, and copies of the Chinese version of The Disciple-Making Minister

Blessed are the Poor of China…

Over the past few decades, China has become the manufacturing powerhouse of the world (just take a look at the labels of almost everything you buy). The poorest people in China, chasing after the carrot of wealth, are being exploited to provide cheap labor to manufacture everything you can imagine. An estimated 140 million rural Chinese have left their villages to join China’s urban work force, the largest migration our world has ever seen. 45 million more will join them in the next five years. Factory wages in the cities begin as low as 40 cents per hour. Even the land that is used to build those factories is often acquired from peasants at artificially low rates set by local governments and
then sold for a profit on the open market.

It doesn’t take a master’s degree in economics to realize that those of us who are wealthy are so, at least in part, because others are willing to work so cheaply. If you’re reading this, chances are that you benefit every day in innumerable ways from China’s poor. There is, however, at least one thing we can do to counteract the world’s structural economic injustice. We can use our wealth, gained in part at the expense of China’s poor, to eternally benefit those same people. Let us not be guilty of reaping where we have not sown!

This update only highlights a small portion of the many on-going ministry projects of Heaven’s Family. To find out more, please visit our new gateway website: HeavensFamily.org, which links to our three divisions: Shepherd Serve, Orphan’s
Tear and I Was Hungry.

Later this month, associate minister Chuck King will be traveling to serve hundreds of Christian leaders in Ghana, West Africa. I will be leaving at the end of the month for Sri Lanka to do the same. Associate Teryl Herbert is already on his way to Kenya and Tanzania for ministry there. We count ourselves privileged to serve as your love-link to the “least of these” among Jesus’ family around the world. Have a beautiful October. 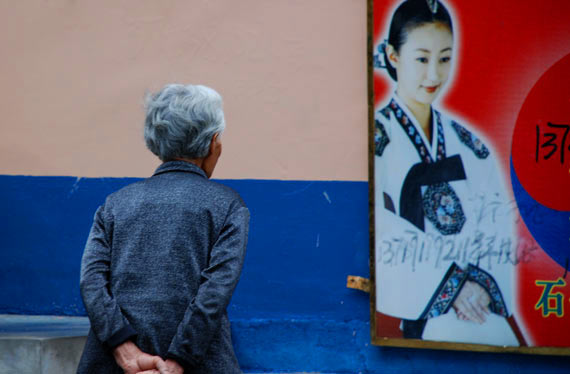 Oh, to be young again! The whole world dreams of eternal life. Those of us who have
it need to share it!