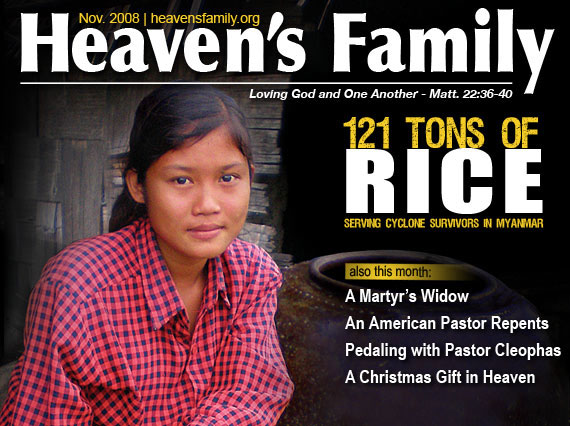 A young woman named Perila, a survivor of Cyclone Nargis in Myanmar, one of thousands of people who have recently received rice from Heaven’s Family

I’ve received hundreds of such photographs from our partners who are distributing rice and other necessities, on our behalf, to Christian survivors of Cyclone Nargis on Myanmar’s Irrawaddy Delta. Looking into their eyes, I see Christ, incarnated in the “least of these” among His family. Although they have not seen our faces, they’ve also seen Christ in us, giving of ourselves that they might live. How blessed we are.

In this update, I’ve included as many photos of our thankful family in Myanmar as I can. I’ve also included encouraging reports from other places around the world where Heaven’s Family is serving. Thanks for allowing God’s love to flow through you. It’s the sure evidence of your faith in Christ. — David

A Martyr’s Widow
The Widows Fund at Work 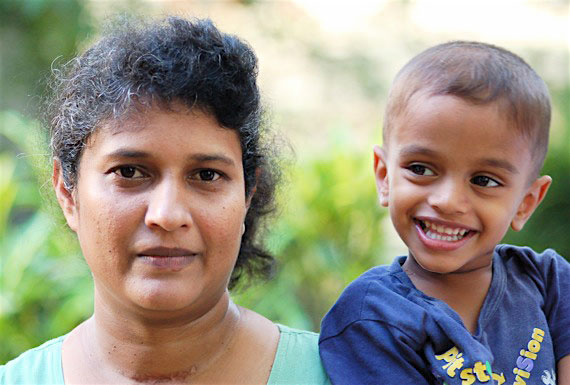 Widow Shiromi Edirisinghe and her only son, Shered

The threatening phone calls had been coming for six months. The callers warned Sri Lankan pastor Neil Edirisinghe that if he didn’t stop converting people to Christianity, he would pay with his life. Their threats, however, did not persuade pastor Neil to abandon his calling.

One evening, just as he and his wife, Shiromi, arrived at their home with their 2-year-old son, they were brutally gunned down by two men on a motorcycle. Pastor Neil was in the Lord’s presence immediately. Shiromi barely survived and was in a coma for thee weeks. Doctors gave up hope, but she regained consciousness, and after much physical therapy she can now walk. However, a bullet remains in her spinal cord that can’t be removed without risk of her being paralyzed. Their son suffered minor injuries.

The late pastor Neil with Shiromi and Shered

Shiromi is one of many Christian widows in Asia who have been sustained by gifts to our Widows Fund. She intends to eventually continue her late husband’s ministry.

Last month I received an email from Rev. Michael Dissanayake, general superintendent of the Assemblies of God in Sri Lanka, who several months earlier had ordered hundreds of copies of our book, The Disciple-Making Minister, to distribute to Sri Lankan pastors. He was unaware that I knew anything about pastor Neil’s martyrdom, but he wanted to tell me about his recent visit with his widow:

Dear David, let me share an amazing testimony with you….

When I visited [Shiromi] a couple of days ago, she was talking about her husband. She said “Neil loved a blue book which he read many times and always talked about it.” He had told her that he was going to change his church to be a disciple-making church and not a spectator church…

Referring to your book he has said, “This is not a book, it’s a fountain.” Now she is reading that book and it reminds her of everything her husband said to her. She finds it difficult to read it because it brings memories of what her husband said. At the same time, she is so touched by the truths in the book.

I thought I will write to you so that you will know how greatly they were blessed by your book. Thank you for your heart for pastors.

As I read that email and thought of the martyrdom of pastor Neil, it made me more determined than ever to put The Disciple-Making Minister into the hands of millions of pastors around the world. Your support has already enabled us to give our 500-page equipping manual to over 100,000 pastors who speak twenty different languages. 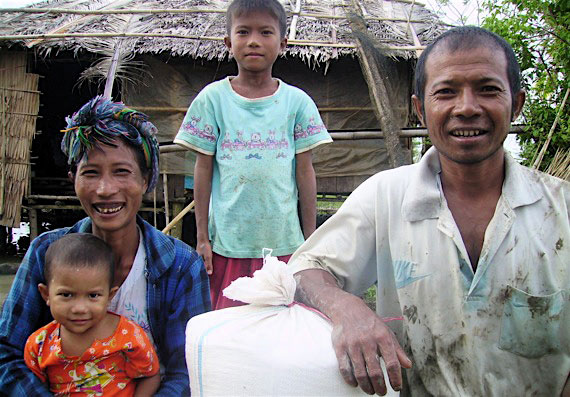 Photos tell stories so much better than words. Below are just a few of the hundreds of photos we’ve received of cyclone-surviving believers in Myanmar who have been assisted by Heaven’s Family. In many cases you will see the very primitive thatched shacks that they’re now living in, having lost everything they previously owned to an eight-foot surge of sea water.

So far we’ve distributed 121 tons of rice to believers in Myanmar who survived Cyclone Nargis. They will continue to need our help for several more months before they can be self-sustaining. As you look at the photos below, keep in mind that every face is the face of one of your family members. Every smile is the result of the sacrifices of Heaven’s Family’s partners. 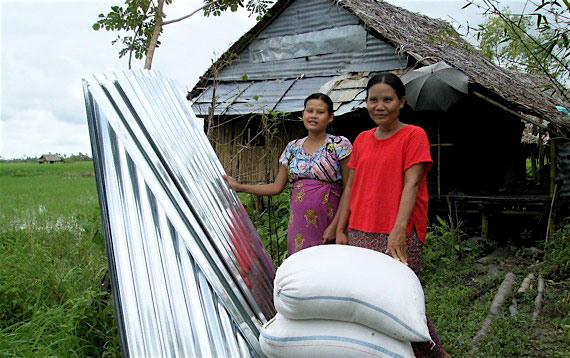 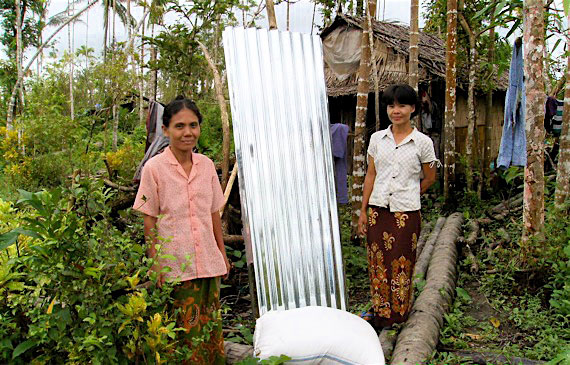 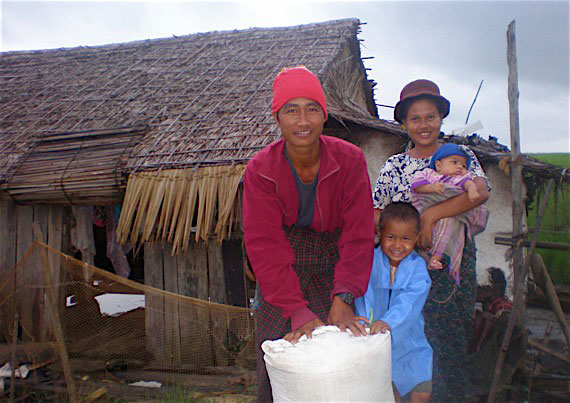 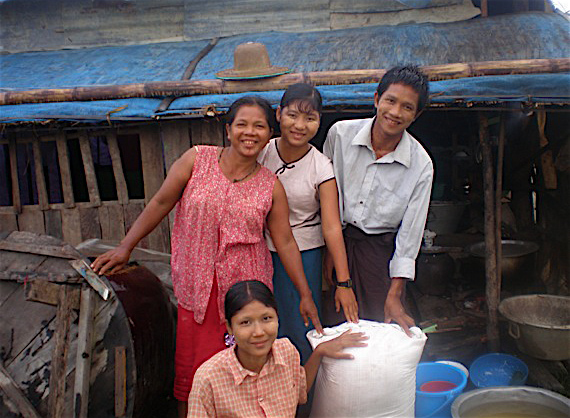 They survived by climbing up coconut trees to stay above the water surge. This bag of rice will feed them for a month. 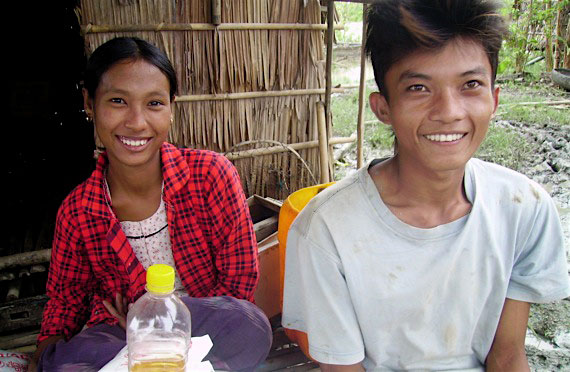 Notice their simple home behind them 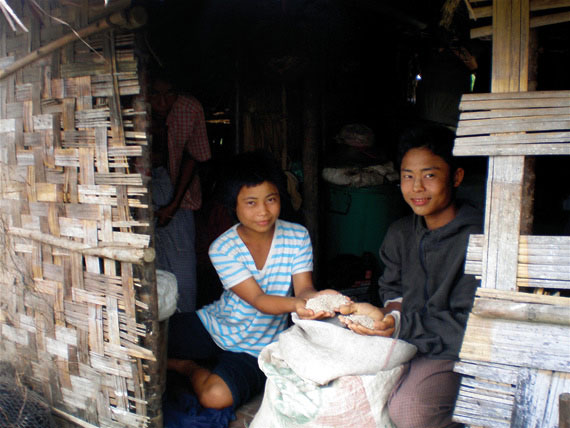 This sister and brother lost their parents to the cyclone 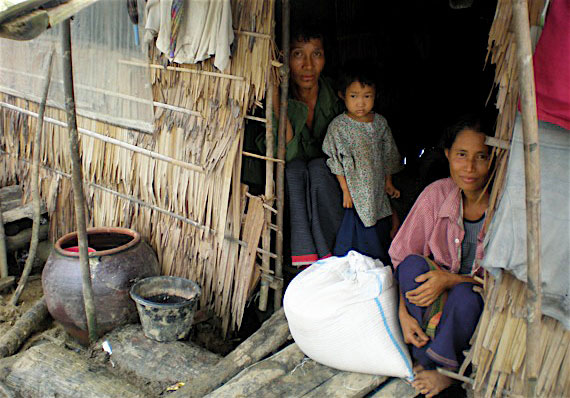 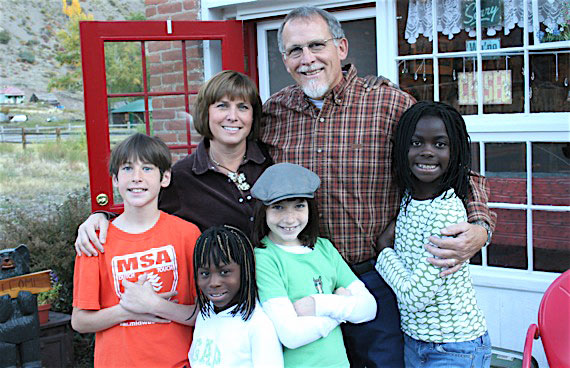 Bruce and Lisa Harris, with their children, Collin, Saide, Calli, and Zoe, standing in front of their gift shop

The Slumgullion Gift Gallery in Colorado’s Lake City contains an eclectic mix of home decorations, western art, jewelry, and more. The proprietors, Bruce and Lisa Harris, happen to be unashamed lovers of Jesus, and so they also sell a few radical books with titles such as The Great Gospel Deception and Through the Needle’s Eye.

A few weeks back, Bruce was called by an employee at the gift shop to quickly come. A customer there was insisting on seeing him. When Bruce arrived, he saw a man standing in the book section reading a copy of The Great Gospel Deception.

If you’ve never read The Great Gospel Deception, you can read it for free on our website. Or you can order your own copy of the book for yourself or someone else.

Pedaling with Pastor Cleophas
The Mobilize a Minister Fund at Work 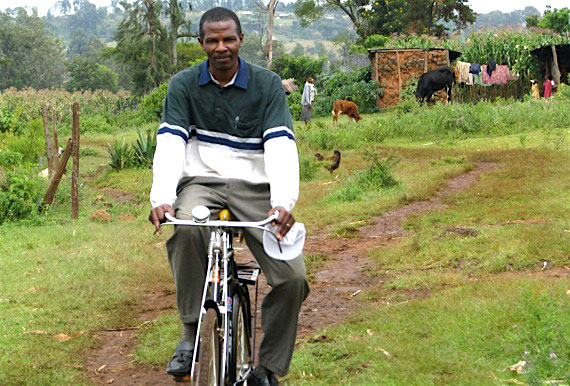 When Heaven’s Family International Director Chuck King was serving in East Africa a few months ago, he blessed three pastors with new bicycles—something they would never have been able to afford. One of those pastors was Cleophas Makona. His bicycle was provided with funds that were given to our Mobilize a Minister Fund from someone in New Zealand. We recently received the following report from our primary Kenya partner about the difference pastor Cleophas’s bicycle has made in his life:

I met Cleophas last week, and his face was shinning with a big smile on his face. He said life has been good. With the help of the bicycle, he has planted three more churches in two months. Also there is joy in his home as every Tuesday he takes groceries with the bicycle to a big market, and thus he can make some money from doing that. In return his family is experiencing new strength, there is new life in his marriage, and he says he is now enjoying ministry like never before….He says “God bless you, I am healed.”

All that blessing from one bicycle! With your help, we’ve mobilized hundreds of church-planting pastors in both Africa and Asia with their own bicycles.

A Life-Changing Christmas Gift
21 Lessons on the Sermon on the Mount, filmed in Galilee

Looking for a Christmas gift for someone special? Our new DVD pack containing twenty-one teaching lessons through the Sermon on the Mount could be the answer. Filmed in Galilee near the place that Jesus originally delivered His most famous sermon, each half-hour teaching by David Servant examines the heart of Jesus’ challenging and life-changing message. Every episode also includes an interesting side trip to a historical biblical site in Israel.

This DVD pack is only $45 (including shipping within the U.S.). You can order the Sermon on the Mount DVD set securely by credit card. 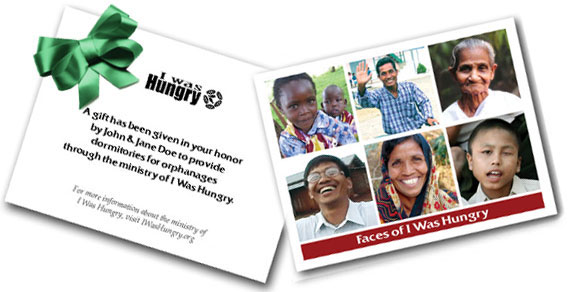 What Christmas gift do you give to friends and relatives who already have everything that they need (including the DVD series offered above)? How about treasure in heaven? We’ve set up a Christmas Gift Card section at both I Was Hungry and Orphan’s Tear so that you can give, in honor of a loved one, clothing to a Christian orphan who will receive no other gift this year for Christmas, a business start-up grant for a poor Christian widow, food for a starving believer in North Korea, and so on.

The gift cards are beautiful. We can mail your card to your address or directly to your loved ones. Your card will say exactly what need has been met in their honor.

It only takes a minute to order your cards using the simple forms at I Was Hungry and Orphan’s Tear, and you can use your credit card or check to make a payment. You could probably do all your Christmas shopping this year in thirty minutes just sitting at your computer! Or you can call us at (412) 833-5826 and order your cards over the phone. And as always, nothing is taken for administration of your gift. 100% of what is received is sent to the designated need.

The deadline to order your cards is December 15 in order to have your gift cards in your mailbox (or your loved-ones mailboxes) by December 25!

Two teams totaling 28 people are traveling to Myanmar (Burma) in November and early December. They’ll spend most of their time serving at our 31 orphanages there. David will be joining both teams so that he can visit our many projects in Myanmar, which means he’ll be gone from November 8 through December 12. Chuck King will be training Myanmar pastors at two conferences. Your prayers will be appreciated.

We are very thankful for our small but dedicated team serving Heaven’s Family in the United Kingdom. If you are a U.K. resident who would like to be involved, just e-mail us at [email protected]

Please do keep Heaven’s Family in mind when you consider your end-of-year giving. Our income during the final two months of 2008 sets the stage for what we’ll accomplish in 2009. Thanks so much.

Parting Shot
The Joy of Our Salvation 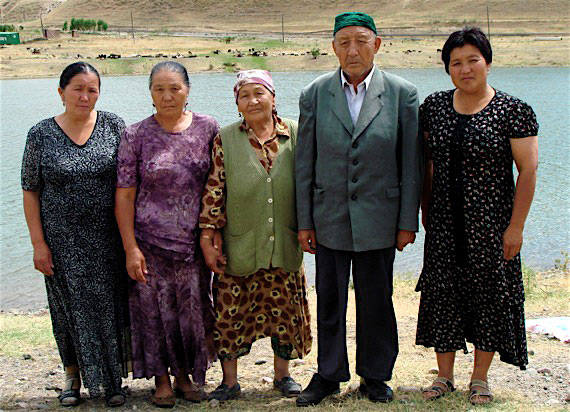 Missionary John Carey sent us this photo of five of his converts in Kyrgyzstan who had just been baptized in the lake behind them. He said that just before he took this photo, they had been smiling and joking, but as soon as he held up his camera, they gave him a culturally-appropriate pose. John couldn’t get them to smile! Many people around the world feel that smiling for photos makes them appear proud.