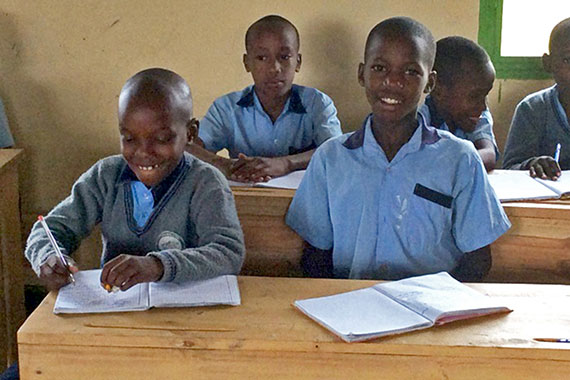 Rémi and Chance doing school together at their shared desk.

Before you begin reading what follows, first take a look at the above photo. It shows two cute little Rwandan girls, sitting together at a shared desk in a typical African classroom. Their names are Rémi, age 8, and Chance, age 11, and they are inseparable best friends. But theirs is a miraculous friendship. Let me tell you why that is so.

You’ve probably heard of the Rwandan Genocide. In 1994, decades of pent-up ethnic hatred exploded, and Rwanda’s majority ethnic group, the Hutus (who comprised 84% of the population), began a systematic government-fueled slaughter of the minority Tutsis (and moderate Hutus). In a short period of 100 days, 800,000 Tutsi and moderate Hutus were massacred in cold blood—men, women and children—mostly hacked to death by machetes or bludgeoned with clubs.

Neighbors murdered neighbors, as any Hutu who refused to kill was killed himself. Tutsis who took refuge in schools and churches found no sanctuary from rampaging mobs who mercilessly exterminated them. I will spare you the horrific details of the atrocities, but it was a living hell.

It was during that genocide that Rémi’s father, a man named Jean, murdered Chance’s grandparents. Chance’s parents barely escaped with their lives.

As the wheels of justice began to turn in the ensuing years, some of the killers found themselves behind bars. Jean was sentenced to 11 years. But this is where the story actually begins, because while incarcerated, Jean met Jesus. Once he repented, he knew he must do what seemed impossible: ask Chance’s parents to forgive him.

A meeting was arranged by a ministry that is working in Rwanda to facilitate such reconciliations. After wrestling in agony with still-open wounds in their own hearts, but knowing that God had forgiven them through Jesus Christ, Chance’s parents forgave Jean. Another miracle.

As part of the process of reconciliation, both families relocated to a place referred to as a “reconciliation village,” where they would become neighbors, and their children would attend the same school. It was a difficult move for all of them, but one anchored in their faith in the God of forgiveness and encouraged by the growing sense of hope for the future of Rwanda. 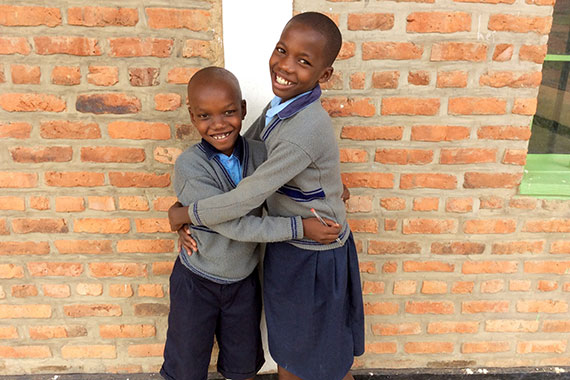 Rémi on the left and Chance on the right.

Best friends Rémi and Chance, sitting side-by-side each day in school, are part of the miracle that testifies of the power of the gospel. Their school, named Little Angels School, was started in 2013 by Heaven’s Family friend, pastor Deo Gashagaza. His ministry seeks to reach vulnerable, impoverished children of genocide victims and offenders with the message of unity and reconciliation. So Jesus is at the core of the curriculum at Little Angels School. As Rwanda’s future leaders, these children are the hope of tomorrow. 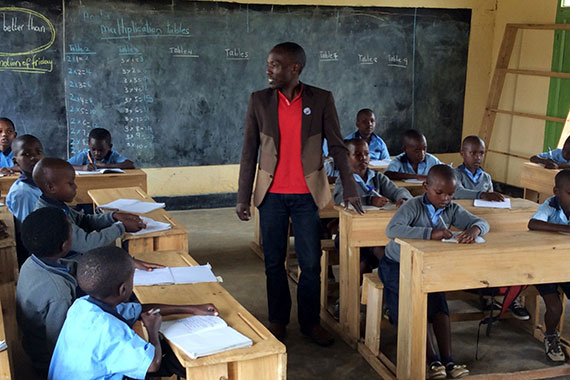 The school also serves children of offenders who are still incarcerated—many of whom have yet to repent of their atrocities and have yet to hear of the forgiveness Jesus offers them.

Heaven’s Family’s beloved staff member Bob Collins, who directs our Prison & Rehab Ministry, was recently in Rwanda visiting Little Angels School. He learned that Pastor Deo needs to build an additional classroom in order to accommodate a fifth grade class, which will allow the school to continue to grow and extend its good influence. Just $9,000 will make that classroom a reality, plus a 5th-grade teacher’s salary for one year.

This is a wonderful opportunity for us to spread the gospel, make little disciples, educate Rwandan children, shape Rwanda’s future, and advance Jesus’ kingdom. So we’ve committed to the project. We’ll also be working with Pastor Deo to find ways to help Little Angels School school become self-sustaining, a challenging goal due to the fact that many parents are so poor that they cannot afford to pay what it actually costs to educate their children. One likely strategy will be business training and micro-credit, something we have successfully employed elsewhere. 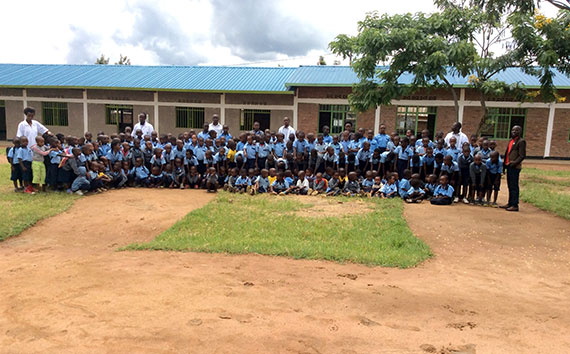 All of the students at the school have been affected by the genocide and are a part of the reconciliation village.

I’m personally investing in this project, and I hope you will join me. It is another lovely chance to lay up treasure in heaven by serving the “least of these” and advance Jesus’ kingdom. No gift is too small (or too large!), and if we happen to raise more than is needed, it will be used by our Prison & Rehab Ministry to help with other similar projects around the world. Thanks for your compassion!

Yes! I’d like to educate Rwandan children, shape Rwanda’s future, and advance Jesus’ kingdom with my gift of: