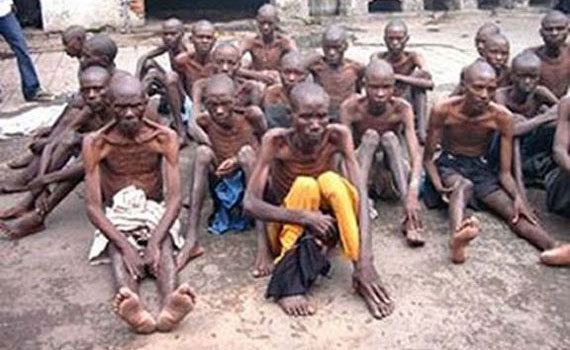 Munzenze prisoners in a UN photo from 1995. We must not let this happen again.

I must tell you about an emergency situation I’ve just learned about from one of our trusted partners in the Democratic Republic of Congo. A rebel army has seized control of a large portion of the eastern province of North Kivu and is threatening to invade the capitol city of Goma, a city Carole and I visited March of last year.

During this crisis, the Congolese government has cut off all provision to Munzenze prison, the central prison of Goma. The prisoners, which include women as well as their children and babies, will starve to death unless outside help comes. I visited Munzenze Prison when we were in Goma last year, and conditions are deplorable even when there isn’t a crisis such as this.

Here is an excerpt from an email sent by a Canadian missionary friend and partner with Heaven’s Family who spends six months each year in Goma and is very aware of the current situation:

The last thing we did before leaving [Goma] at the end of April was to leave a small amount of dried food and lamp oil in the prison for the women, babies and juveniles. Several of the people we were ministering to were having a hard time to walk to get to our meetings [in the prison] because of starvation. The prison authorities and the government are supplying NO food to the inside of the prison.

As of last news, the major [international aid organizations] also had decided that it was not their responsibility to help out. Simeon (our contact) was desperately trying to persuade the civic and religious communities to increase their giving. In May the violence began again. The men in Munzenze Prison stormed the [interior prison] wall and stole all the supplies from the women and juveniles.

As of this week, the rebels are still in charge of the city, the gov’t and UN having retreated to Bukavu. There is a curfew in place and many threats of violence. The people are traumatized, waiting for the next blow. We are praying that mass bloodshed will be avoided. Some of our team have been treated very poorly and they are suffering great hardship.

The situation is urgent, and we have an opportunity—through our prison ministry partners in Goma—to provide food to starving inmates, among whom are women, children and babies, some of whom are also our spiritual family members who have come to the Lord in prison.

Please help if you can. 100% of your contribution will be sent to Goma to purchase food.

Thank you so much and May God richly bless you!