The Human Trafficking Fund at Work in Cambodia 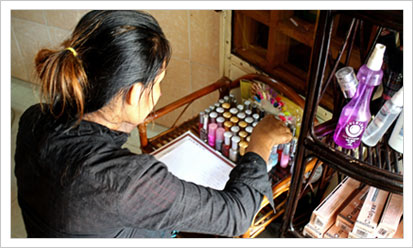 Those are a few of the labels that, branded deeply into “Sinak’s” heart, continually tormented her. Unable to find relief, she was about to make her fifth—or was it the sixth?—attempt to take her life.

Employing less drastic means, Sinak had been trying to escape the life that she loathed for a long time. As a teenager, she fled from the constant denigration of her father’s curses—but into the arms of a husband who beat her. Bolting from that marriage, Sinak sought safety in another relationship, only to find that he was no different from the other men in her past. She ran again, taking her daughter, Nary.

In order to support herself and Nary, Sinak took a job at a beer garden in Cambodia’s capital city of Phnom Penh, an establishment that sold more sex than beer. It wasn’t long before Sinak surrendered to the undertow of Phnom Penh’s dark world of prostitution. It paid the bills, but it also fed Sinak’s hatred of herself and the men who mistreated her. She tried to escape through alcoholic binges, but the solace was always short-lived. Caught in a vortex from which she could find no escape, Sinak tried to take her own life so many times that she lost count. 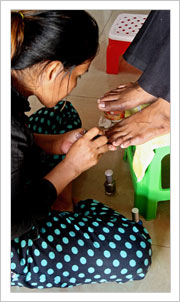 “Sinak” (not her real name)
practicing her new cosmetology
skills with a client. For security
reasons we can’t show her face.

One evening a new patron walked into the beer garden where Sinak worked. Unbeknown to Sinak, the woman was a follower of Jesus who serves Him through an indigenous ministry called Precious Women. Sinak can’t recall how long the conversation with her new friend lasted, but she will never forget when, later that night, she talked to her about giving her life to Jesus and offered Sinak a new beginning with the help of other believers who followed Him. Like a woman sinking in quicksand, Sinak seized the lifeline being offered her.

Precious Women offers not only the gospel, but vocational training as well, so that women like Sinak can restart their lives in Christ, free from the shameful bondage of their former lives. Through gifts to our Human Trafficking Fund, Heaven’s Family is blessed to sponsor Sinak for one year for just $70 per month, providing not only vocational training, but counseling, health care and, most importantly, discipleship. Sinak is being trained to be a cosmetologist and a follower of Christ, and in a year’s time she’ll have the skills to open her own beauty shop. And there, by God’s grace, she can tell her clients about the One who gave her an “extreme makeover”…one that began in her heart. 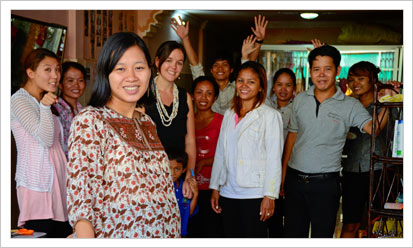 Lida, the director of Precious Women (and very pregnant with the son
she recently gave birth to), with the rest of her staff

In many developing countries, among those who do not know Christ, it is often expected that young girls and women will do whatever it takes to help financially support their parents and siblings. Tragically, with little or no education or skills training available, the sex industry is too often the chosen option. Even more tragically, some parents knowingly sell their daughters to traffickers who promise them an ongoing income. Gifts to our Human Trafficking Fund not only provide a future and a hope for women like Sinak who have been rescued from the sex industry, but also make possible preventative ministry for at-risk girls.