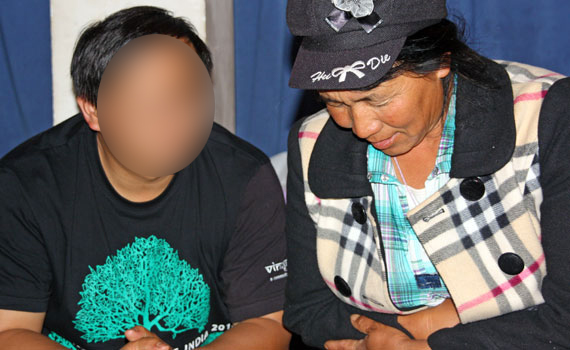 Pastor Paul Fang leading Mrs. Yao to the Lord in spite of persecution

God is moving again amongst the A-Che people of Southern China. Those of you who have been following our efforts know that the A-Che, until very recently, was an unreached people group. Much has happened in the last few months.

As of this month, about 50 A-Che have made decisions to follow Jesus. Of those, 40 have attended discipleship training courses, and 30 have been baptized. This is cause for great rejoicing and praise to God!

I also want to report that Paul Fang, the very first A-Che disciple, has been ordained as the first pastor from his tribe!

The Chinese government, which is particularly hostile to Christianity in this region, has taken notice. On July 4th, while celebrating America’s independence and freedom, I received word from Paul that the police and the Religious Affairs Bureau came knocking at the door of Sister Yang, another disciple I’ve told you about (click here to read about her). Christians aren’t free everywhere.

The police threatened Sister Yang and others at her house, confiscating Bibles and digital players that contained audio versions of the Bible, worship songs, and teaching materials. They told them it’s illegal to believe in Jesus, even though China officially grants religious freedom in its laws. They also warned them not to listen to Pastor Paul.

In the midst of this persecution Pastor Paul and his wife continue their work, determined to not let this current wave of persecution stop them. And while some believers are avoiding Pastor Paul in public out of fear, Sister Yang and a handful of believers bravely continue to meet with him. Still others are still coming to Jesus, despite the risks. (If you’d like to help disciple A-Che believers, you can give using the blue button below.)

Pastor Paul is encouraged by the support we’ve been sending him through the Unreached People Groups Fund that has enabled him to continue his work. On his behalf, I thank you. I know he would greatly appreciate your prayers.

She’s Not Heavy, She’s My Sister
My Mom Was a Witchdoctor