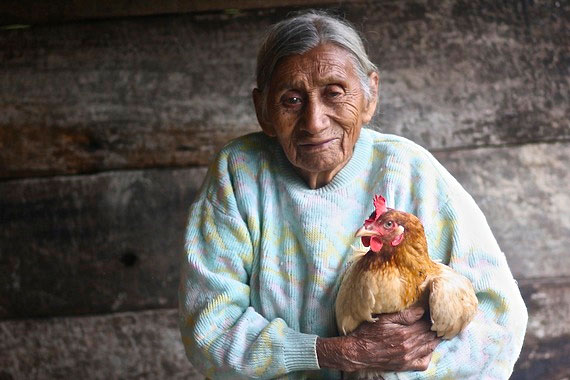 87-year-old widow Raymunda Ojeda Escamilla, who lives in Ozomatlan, an impoverished village high up in Mexico’s Sierra Norte. She is descended from the Totonac tribe, some of Mexico’s original people, and she is the beneficiary of an Heaven’s Family Opportunity Grant and Loan, through which she has purchased chickens.

My dear friends, American missionaries Jason and Nicole Fitzpatrick, are my hosts this week in Mexico. They’ve been bearing fruit in Latin America for decades, making disciples. Heaven’s Family has been partnering with them over the past five years through our various Focused Funds.

One of those funds is the Food Fund, directed by Diane Scott. Diane knows that the best way to provide food for the poor is by helping them to produce their own food whenever that is possible. To that end, Diane offers grants and loans to believers who face food insecurity.

Today I met with a number of the beneficiaries of Diane’s work, all of whom she met when she visited Mexico this past May. All are Christian widows and descendants of some of Mexico’s original tribal people. All live in abject poverty in crude concrete-block shacks in Mexico’s Sierra Norte. All belong to one of the 40-or-so churches that the Fitzpatricks have planted over the past ten years. And each received a combination of a grant and a loan from Heaven’s Family totaling about $275. With that money they purchased chicken wire, chicken feed, and (you guessed it) chickens. Their goal? Raise chickens. Eat and sell chickens and their eggs. Earn an income. And share with those who have need.

So far, so good. Roosters and hens have been getting along. The hens have started laying eggs every day. Loan payments begin in January. (The grant portions were $150 each, and the loan portions were $125 each.)

Above are a few more photos of grateful chicken-raising widows. Thanks for being part of Heaven’s Family.