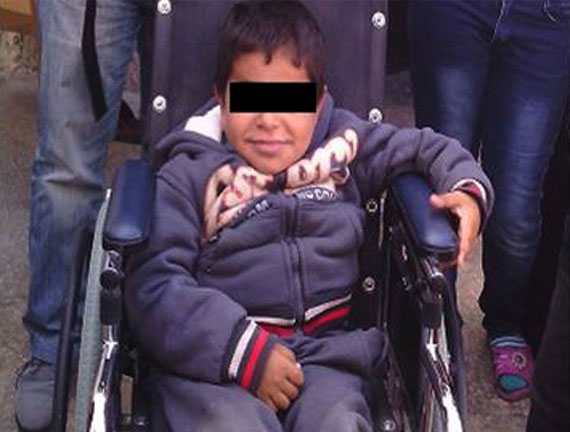 I’m sure you’ve heard about the recent armed conflict between Israel and Gaza. As is often the case, innocents are either caught in the crossfire or neglected due to strained resources or the evacuation of aid workers.

Happily, Heaven’s Family has found a partner currently working among the needy in Gaza, and we’re funding two of their aid workers for a year to help those like “Mohammed,” an 11-year-old boy who has been partially paralyzed since birth.

Mohammed’s family consists of his parents, a brother, and two sisters. They live in one small room, and their kitchen and toilet are separate structures outside, neither of which have a roof. Because of his disability, Mohammed must go to the hospital every few days for regular treatments. His father is the primary source of the family’s meager income, which he earns by working small jobs—those he can manage with one hand, that is, since his other is unusable—whenever he finds them. They also receive help from time to time from the government and relatives.

Although Mohammed’s siblings have helped carry him, even to school, he could never go anywhere on his own. But when our partners met him they compassionately provided him with a wheelchair. They now routinely visit him and his family, and report that the wheelchair has changed Mohammed’s world, enabling him to go places on his own for the first time in his life!

We’re thrilled to help Mohammed and his family better cope with their disability, but the bigger picture is that this gracious act of kindness has opened a wide door for the gospel into the hearts of Mohammed, his family, and those who know them—all of whom are currently Muslim. And there are many others with disabilities in Gaza who, unbeknownst to them, are waiting for a visit from our partners to show them the mercy, grace and love available to them through the Lord Jesus Christ. That’s why we’re there, and a wheelchair is a great tool with which we can win hearts and lives to Him.

Breathing the Air of Heaven
Christians with Disabilities Fund