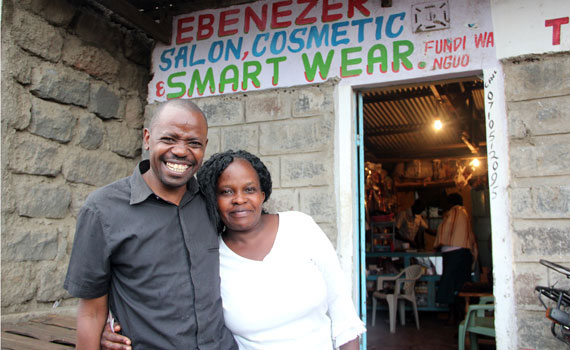 Joseph and his wife, Doreen, in front of their shops

It’s said that only 1 in 20 people are true entrepreneurs—those, that is, who understand business as effortlessly as Mozart understood music and Einstein understood physics. These minds can be found all over the world, often lying dormant, just waiting to spring to life.

As a member of the Micro-Loan Ministry team, I am always amazed when we find these true entrepreneurs. These men and women seem destined to succeed in business and just need the right set of circumstances to make it happen. When supplied with the right ingredients, these people create and sustain their own businesses as easily as a tree sprouts leaves and grows towards the sun. Joseph Kioko is one such entrepreneur.

Joseph is a humble pastor living in the Katembwa slum of Nakuru, Kenya. Several years ago he and his wife, Doreen, began renting a small room on one of Katembwa’s busy dirt roads. In the front of the shop Doreen opened a hair salon, while in the back Joseph started making leather shoes and belts by hand. 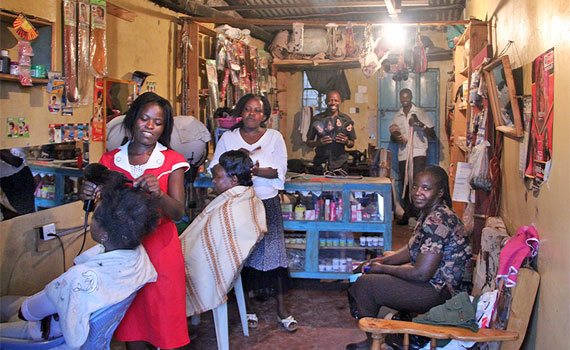 Doreen (in white) runs her hair salon, while Joseph, at left in the back, operates his business from the rear of the building

In September of last year, Joseph and his wife attended a Heaven’s Family Small Business Training (SBT), where he was recognized by a local pastor named Thomas Okumu. After the SBT, Pastor Thomas became a Heaven’s Family micro-banker and was given the task of choosing 12 borrowers with whom to start the first round of micro-loans. Joseph was an obvious choice.

Joseph received a loan of $200 and immediately went to work increasing his leather stock and reaching out to local boutiques. Among his fellow borrowers he became the group leader and was also appointed the micro-bank’s secretary.

Joseph’s workshop is now a beehive of activity. When we visited him we saw a man hard at work: his forehead was sweaty, his sleeves were rolled up, and his hands were blackened from leather dye. Joseph’s business is thriving and others are witnessing his hard work and dedication. Before his training and loan, Joseph’s business was yielding a profit of $10 to $15 a week; today his business delivers twice that, plus he’s now able to employ two young men from his community.

At left, Joseph and micro-banker Thomas created a record book to keep track of borrower payments; at right, Joseph and shop assistant Duke displaying some of their handcrafted work

Joseph and Doreen are happy to be working together in their shared shop and are expectant about the future. They call their shop “Ebenezer,” signifying their remembrance of all God has done in their lives, and painted the name above the entrance as a witness to all who pass by and enter. They are proud to have a business that serves its customers from head to toe, and does it for Jesus.

Thanks for joining us as we seek to equip the poor to lift themselves out of poverty.

Micro-Loan Ministry
A Rope in a Pit