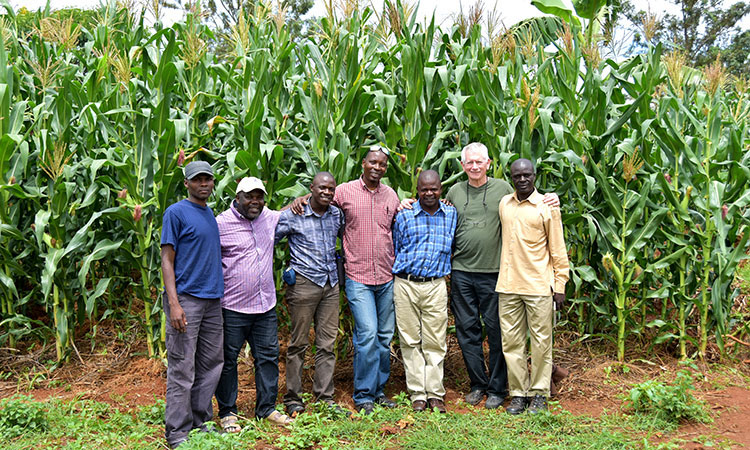 Some of our team in front of a Farming God’s Way demonstration field filled with incredible maize (note that Dickson, at center, is over 6 feet tall, which means that the stalks behind us were well over 10 feet tall)

With the landscape of Malawi slowly receding under the wings of our plane, we headed for Rwanda. Tagging along were my good friends and ministry partners Dickson Shuwali and Charles Mithowa, both of whom we had already spent several days with in Malawi, and were soon to rendezvous with trainers from Kenya, Uganda and Rwanda to create a truly international team—one that the “A-Team” of the 80s TV show would envy!

We came to see if the initial Farming God’s Way implementation in Mbyo reconciliation village was successful, and to make plans to introduce FGW in Rweru, another reconciliation village, the following month. Also very much on my heart during this visit is the need to build a leadership team from among our African FGW partners to help them transform a continent desperate for better farming techniques AND the spiritual component of our God’s Love Groups that are integral to the success of FGW.

After a late-night arrival and some much-needed sleep, we assembled our team—ten men from six countries—at the Prison Fellowship Rwanda office in Kigali, the capital of Rwanda. And then, with a full day of plans and a very full Land Cruiser, we drove to the African Transformation Network headquarters and demonstration farm on the outskirts of Kigali. There we met with Charles Kabeza and Peter Nzumutashya. Charles directs ATN, while Peter is the FGW trainer for the reconciliation villages. We toured their demonstration farm and then departed for Mbyo (reconciliation villages, in case you’re not familiar with them, are where repentant murderers convicted following the 1994 Rwandan Genocide live side by side with the families of their victims—both sides having been discipled and counseled through a biblical process that’s been dramatically transforming lives).

We lodged in a vacant building on the edge of Mbyo. Although the accommodations wouldn’t rank well on TripAdvisor, our hostess prepared extraordinary meals and her three-year-old daughter charmed us all!

After lunch we toured the village and their four FGW demonstration fields that together totaled less than one acre. The purpose of the demonstration fields is to show participating farmers—and to their watching neighbors—how superior FGW is to traditional farming methods. The FGW maize (corn) was 8-12 feet tall with large, well-formed cobs, while the traditionally-grown maize was 3-4 feet tall with tiny cobs—if any. As you might suspect, the FGW demonstration fields, located along a well-traveled dirt road, were a hot topic among local residents, and many eagerly wanted to know more.

Following a simple breakfast our team enjoyed some very good devotions (times like these served as a kind of spiritual glue, bonding us all together as brothers—exactly what I’d hoped and prayed for!).

Today we had a unique opportunity to attend an outdoor public reconciliation event, just one of many arranged over the years by Pastor Deo Gashagaza, the president of Prison Fellowship Rwanda. We had been invited by Pastor Deo, my principle ministry partner in Rwanda, but we didn’t realize it would be a high-profile event attended by government VIPs, local dignitaries, camera-toting TV reporters, and a crowd of more than 400 people. Pastor Deo recognized Heaven’s Family’s Prison & Rehab Ministry, directed by Bob Collins, for the valuable guidance and support provided to help bring healing and reconciliation to Rwanda.

About 60 convicted mass murderers and rapists from the genocide sat under a tent in orange prison garb. All had been found guilty and sentenced to death for their crimes about 20 years ago. Two came forward in turn and confessed their crimes to their own families and the survivors of those they had murdered. The second prisoner couldn’t remember how many he personally had killed, but estimated the number to be 75. Until recently he had proclaimed his innocence, insisting those testifying against him only wanted revenge—but then the Holy Spirit got hold of him. The man dropped to his knees and asked his family, the survivors present, and God for forgiveness for his crimes. The survivors then spoke, some weeping openly as they told how God, who had forgiven them of their sins, had now given them the capacity to forgive. There was hardly a dry eye in the crowd, and all was broadcast on Rwandan national news that night. A violent thunderstorm ended the event a bit prematurely, but the refreshing downpour seemed a fitting picture of the spiritual cleansing that took place that day.

At left, a penitent prisoner hugs a family member of one of his victims; at right, many eyes from the crowd watched as this prisoner reconciled with those he’d sinned against, including those who hadn’t yet been born at the time of the 1994 genocide

At left, a view of one prisoner repenting before his own family, family members of his victims, his fellow prisoners, and some of the 400 attending witnesses; at right, the Commissioner General of Rwanda learning about FGW from our Rwandan FGW trainer, Peter Nzamutashya 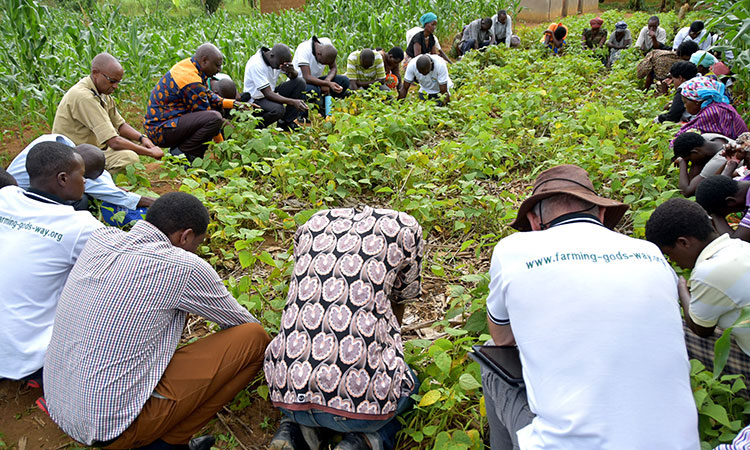 After the reconciliation ceremony, we again went to the FGW demonstration fields in Mbyo reconciliation village. This time the Commissioner-General for the Rwandan corrections bureau came with us to see the FGW fields first hand. He was very impressed with what he saw, and asked many questions of Peter, our Rwandan FGW trainer, and others in our team. To cap it all off, the official joined Pastor Deo (at upper left with orange and blue shirt), our team, and about 20 local FGW farmers around a bean field as we repented on behalf of Rwanda and all of Africa, so that God would heal the land that has been cursed by shed blood.

Currently, there are eight reconciliation villages in Rwanda, with more being created as more prisoners are being released. So far there have been no cases of bad behavior by pardoned prisoners nor retribution by the survivors. The reconciliation villages have been a great testimony of the power of the gospel of Jesus Christ to transform sinful hearts. But there is widespread poverty and hunger throughout all of rural Rwanda, so Pastor Deo and the Rwandan officials have high hopes for FGW to transform their nation, to the glory of God.

Next day we traveled to Rweru reconciliation village to meet with prospective FGW farmers, some of whom shared personal testimonies at a town hall meeting. I was awed by the testimony of Mary. She told how, during the genocide, her husband and five of her seven children were murdered in front of her by a neighbor. Unbelievably, she then turned to the man next to her and said that he was the murderer! She went on to say that she has forgiven him, however, as God has forgiven her for her sins. She and Leonard, the murderer, now live peacefully as neighbors. Leonard then spoke and said that he thanked God for His grace that brought forgiveness and reconciliation with God, Mary and the other survivors. The power of the gospel, demonstrated right before our eyes, was just one of the reconciliation miracles in Rwanda.

At left, another view of a prisoner humbling himself at the start of a new phase of his life, and at right, a man (Leonard) who repented many years ago and whose now enjoying the fruit of his repentance in the form of incredible reconciliation with Mary, the wife and mother of his victims

Before we left, our FGW training team spoke with the Rweru FGW farmers and agreed to start their FGW training in January. Now it was time, we told them, to collect God’s blanket (leaves, grass, twigs, crop residue) to apply as mulch to their demonstration fields.

After visiting a genocide memorial on our way back to Kigali, we enjoyed a delicious “last supper” of roasted goat with Pastor Deo and several of his Prison Fellowship Rwanda staff members. Afterwards everyone hugged and expressed our love for each other as we said our goodbyes. Our display of Christian love between black and white brothers brought curious looks from many passersby.

I’m very encouraged by the team we’ve set in place, and hopeful for the poor of Africa as we move forward into 2017—greater things are coming! Thanks for joining me on these blogs, and for what I hope will be a fruitful year for Farming God’s Way in the new year.

I am also very encouraged that our FGW leadership team is growing together in love and effectiveness. The future for FGW growing and transforming Africa is getting brighter.

Thank you so much for giving hope to farmers, 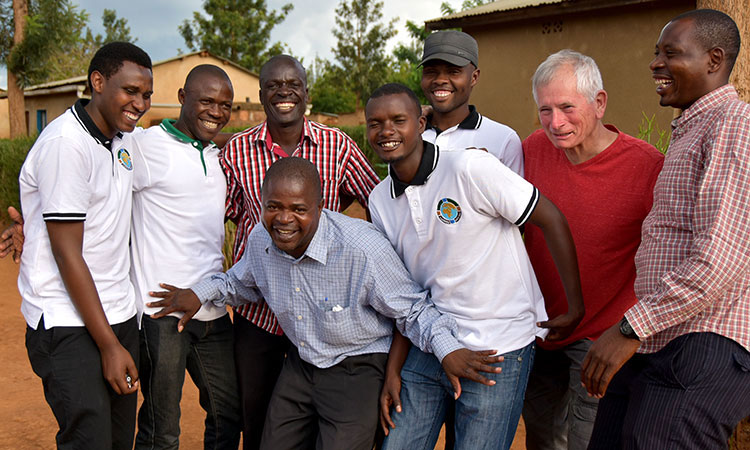 Our team clowning around as brothers near the end of our visit: from left to right, Jean Paul from Rwanda, Joshua and Joseph from Uganda, Charles (in front) from Malawi, Peter from Rwanda, Griffin from Kenya, myself from the US and Dickson from Malawi

Just a few of the many cute kids from Rwanda

At left, me with my little buddy, the charming daughter of our “motel” hostess, who stole everyone’s heart during our stay (we didn’t need to pose her, for she was always coming up and sitting next to us anytime we sat reading on the steps of our accommodations); at right, Rwanda boys playing good ol’ fashioned hopscotch (this boy was captured just as he was about to land in the last two squares)