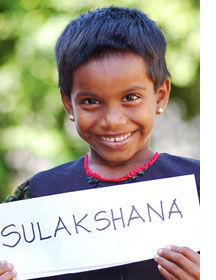 This month, David asked us (Charity & Sally) to compose the Orphan’s Tear update, since we are the ones who do most the work anyway!

So we would like to introduce you to one of the over 420 unsponsored children at Orphans Tear. Her name is Sulakshana, and she is a beautiful little girl living at Eastern Children’s Home in Sri Lanka. Sulakshana is 9 years old and has recently been orphaned. We began supporting Eastern Children’s Home after the devastation of the tsunami in December of 2004. Though Sulakshana and her mother survived the tsunami itself, her mother died not long after due to disease and illness brought about by the aftermath of the storm. Many people, like Sulakshana’s mother, died due to contaminated drinking water that caused disease to run rampant in the region.

Sulakshana’s father was killed during the civil war in Sri Lanka that lasted from 1983 until 2002. Though the war is over, civil unrest persists in this region and children are being orphaned everyday due to violence.

Thank you so much for your compassion for children like Sulakshana. Though Orphan’s Tear has only existed for little over a year, we’ve been able to find sponsors for over 550 orphans. Children who had no where to go are now living in Christian orphanages and receiving the care and nurture of dedicated orphanage directors. Because of sponsors like you, these children now have their food, clothing and school fees provided. Thanks to every monthly child sponsor!

Because of special gifts we received last month, we were able to repair the earthquake-damaged well at Shalom Orphanage, provide a roof and windows for a new kitchen at Faith Orphanage, a rice field for Canaan Orphanage, a new dorm for New Eden Orphanage, plus complete several other projects. We were also able to significantly help six orphanages that receive little or no regular support from us yet, as we wait for more sponsors. On behalf of all the children that have benefitted from all those special gifts, thanks so much.

One of the Cutest Kids in the World!
Two Children in Heaven