The Critical Medical Needs Fund at Work in Kenya 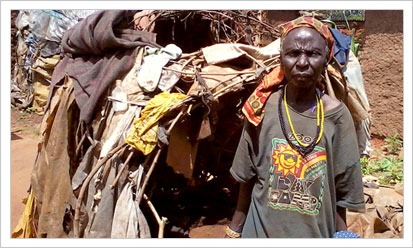 A woman standing in front of her home in Kipsonga slum

You don’t think much of it at first; it’s just a sore spot on the bottom of your foot. Once it becomes a raised white bump with a black dot in the middle, you give it a little touch—and it moves! That’s when you realize that you’ve got a tiny parasite living under your skin known in Africa as a jigger, the world’s smallest known flea. To put it more graphically, a breeding female jigger has burrowed into your skin and is feeding from your bloodstream while it waits for its eggs to develop.

Found in most tropical climates, jiggers (chigoe fleas) are not usually much of a problem—unless you are very poor. It is those who lack shoes or sandals, as well as sufficient water and sanitation, who are most likely to become host victims of the tiny fleas. Jiggers proliferate in the dirt-floor shanties of Africa’s slums. 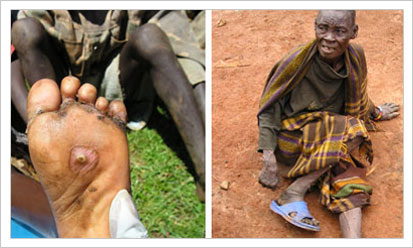 At left, a typical jigger infestation; at right, one of the many elderly host
victims

Two weeks after they’ve burrowed into the bottoms of their victims’ feet, jiggers discharge their eggs, which fall to the ground and hatch within a few days. Two or three weeks later, mature females among them begin their search for hosts, which starts another cycle of infestation against which the poor have no defense. Burrowed jiggers can make walking extremely painful, and they sometimes succeed in immobilizing their victims. 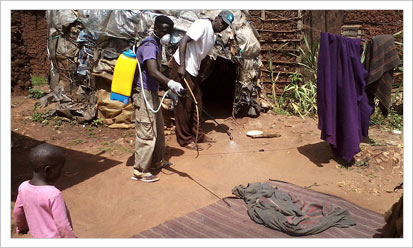 All possessions were sprayed, as well as homes

Jigger eradication involves several steps. Burrowed fleas must be carefully dug from their hosts and the resulting open sores must be disinfected, dirt floors and possessions of infested huts must be sprayed with insecticide, and shoes and sandals must be provided to prevent future infestations. I’m happy to report that through our Critical Medical Needs Fund and with the help of an on-fire Kenyan youth group, we’ve declared war against the jiggers that have infested one Kenyan slum. 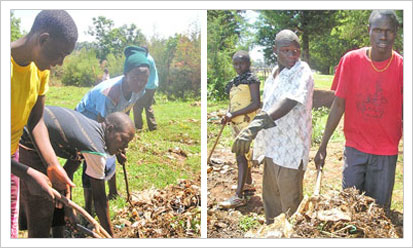 It all began with a desire to love others through serving; here Kenyan
youth clean up debris in Kipsonga

It all started during a youth retreat when the Lord convicted the hearts of some teenagers to serve the poor (although they themselves are quite poor by Western standards). They decided to invade a local slum named Kipsonga with a demonstration of God’s love by clearing brush and debris.

In the slum, however, they discovered greater needs, including the need for jigger eradication. That is when one of the retreat leaders, a Heaven’s Family partner, contacted me. The teens could do the work, he said, but they needed help purchasing insecticide, sprayers, sterile needles, latex gloves, disinfectant, gauze, bandages and so on. I was thrilled to be able to help them serve their fellow Kenyans both physically and spiritually.

I was more thrilled when I later received the reports and photos of their ministry. Many thankful residents praised God for His compassion on them, and the teenagers who served them found fulfillment in a retreat that turned out to be an advance of war—against jiggers! 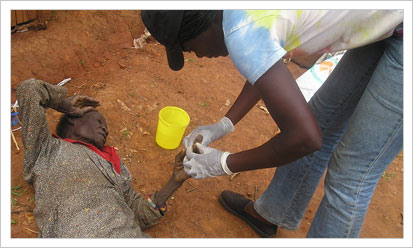 Youth examined and removed jiggers from feet, hands, and wherever
else they made their homes in the flesh of their victims. They also carried
the gospel into the slum, sharing with residents as they worked.

Despite my elation over the Kipsonga Slum project, I couldn’t help but think of the thousands of other jigger victims all over Kenya and greater Africa. What an opportunity to display God’s love! My prayer is that, when the Lord gives me another chance to help relieve the suffering of other slum residents like those in Kipsonga, we’ll have the resources ready. Thanks for your gifts to our Critical Medical Needs Fund that enabled us to partner with some teens whom God used to serve the poor in rural Kenya.

New and Improved!
Behind the Scenes at Heaven's Family

The World Didn’t End!
The Disaster Relief Fund at Work Around the Globe

A Bubbling Business
The Micro-Loan Fund at Work in Cuba

HF staff member Jeff Trotter snapped these two little Burmese beauties who were arrayed in traditional dress. While one potential future Miss Burma seized the opportunity to express the universal hope of beauty queens for world peace, the other seemed poised to unload a piece of her mind!