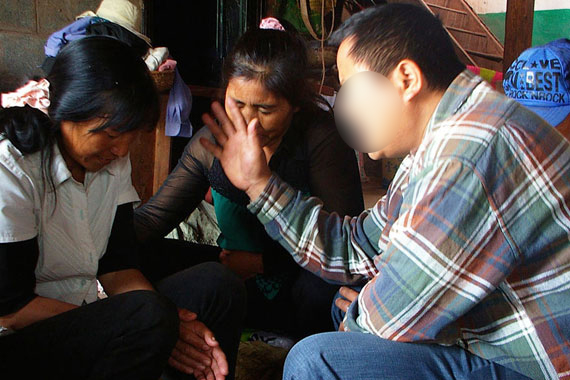 Two enemies only God could reconcile

Insults were normally the first thing Sister Yang heard as she walked each day past the house of Luo Mang, her neighbor. Luo Mang often peppered her loud insults with curses as well.

Luo Mang is not just any ordinary neighbor. She is the wife of the assistant elder, a powerful position in the Chinese rural government system, who helps oversee 10 villages in all. He must be committed to the Communist Party to attain and hold this position.

The wife of an assistant village elder also holds a powerful position—an advantage not overlooked by Luo Mang. She influenced her husband to persecute Sister Yang and the believers in her village and the surrounding villages in an effort to stamp out Sister Yang’s faith and the small house church she’s been planting. She even pressured him to call the police, the public security bureau, and the religious bureau.

That’s when persecution against the burgeoning church planting movement amongst the A-Che people began.

But here’s the rest of the story…

Luo Mang and Sister Yang actually have a lot in common. Sister Yang came to Jesus after being delivered from 70 demons and receiving physical healing (becoming the first convert to Christ from her community of the heretofore unreached A-Che tribe…read more about her story here). Luo Mang was also sick with many worsening problems. And like Sister Yang, she tried everything from witchdoctors to medicines to superstitious rituals for relief—with only worsening results. Then it happened…

God began to soften Luo Mang’s heart. God seemed to be confronting her with the question of why she persecuted Sister Yang. Then her eyes were opened—God had healed Sister Yang…He was the source of her healing. And then Pastor Paul Fang showed up at her village (a connection that leads back to my first blog).

Persecution and possible imprisonment has not kept Pastor Paul from his people. When Pastor Paul showed up at Luo Mang’s village on his last trip, he was shocked to receive an invitation for dinner from Luo Mang. She even killed a chicken, one of the greatest honors a guest can receive. It is a sign of welcome and a bridge for building a relationship.

That evening Pastor Paul shared the gospel with Luo Mang and her husband. Luo Mang’s heart finally broke, and she gave it to Jesus Christ. Her husband hasn’t yet followed her decision, but is completely supportive.

Please pray for Luo Mang to follow Jesus wholeheartedly and for her to have a baby—something her health complications have prevented thus far. Pray for the other 6 believers in her village and the dozens of new believers in their 10-village system.

Your generosity to the Unreached Peoples Group Fund pays for tribes like the A-Che to hear the gospel and helps make thoroughly equipped disciples who then take the message to others who haven’t heard the Good News.