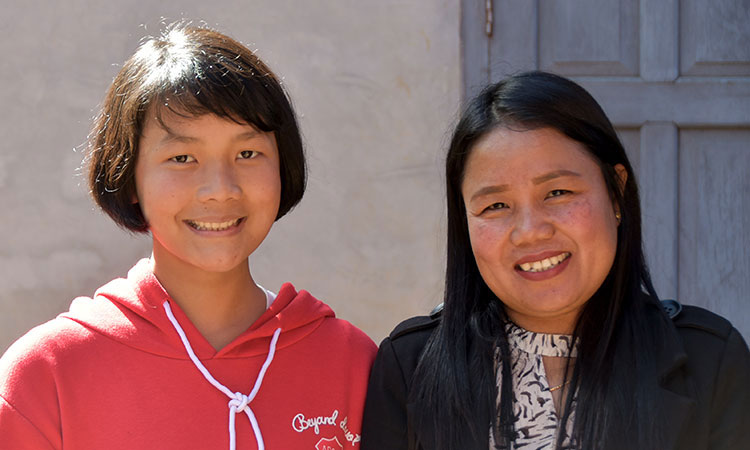 It was a fairly large house, but we soon learned three families shared it. Our partner Marry and her foster daughter Sanda Htun, now 16, sleep in one bedroom and everyone in the house shares the kitchen and single toilet.

A few years ago Marry met Sanda in one of the small villages where she was preaching the gospel. Sanda’s father had died previously, and her life was at risk from human traffickers who prowl the region, which is not far from Myanmar’s border with Thailand. Sanda couldn’t hide her fear; she had witnessed other girls from her village being trafficked. Sanda’s mother also feared for her daughter, so she asked that she go to live with Marry in the safety of Taunggyi. Thankfully Sanda still gets to visit with her mother during school breaks.

Sanda is now able to attend a good school—where she is excelling—and is being discipled in the ways of the Lord. And she is safe from traffickers. Marry is like a big sister to Sanda, and spends her time spreading the gospel in and around Taunggyi, which is predominantly Buddhist. 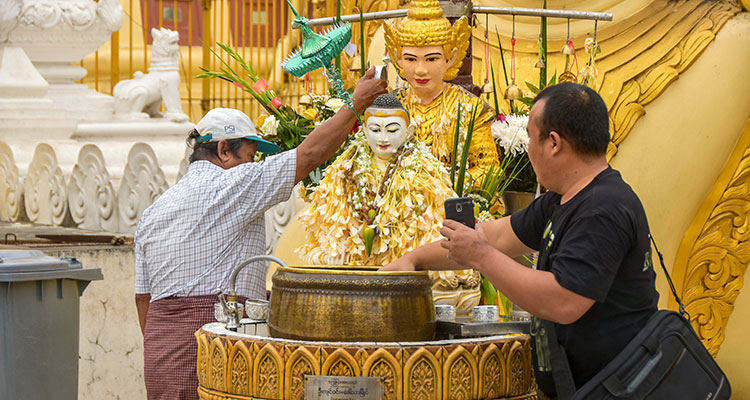 Worshipers at one of Myanmar’s many Buddhist shrines. A common way of showing devotion is to scoop water from the basin at lower center and pour it over the figure of Buddha. The man at right was taking a video of his performance of this ritual with his cell phone (or using a video messaging app like FaceTime) perhaps to make sure others knew of his piety.

Marry shared her story with us today.

At the age of 12 her parents sent her to live in a monastery to learn about the ways of Buddhism. After being there for some time, she met a Christian missionary who snuck into the temple and told her about Jesus. Later, she asked a monk if what she heard about Jesus was true, but she was told that they were just stories and that she should not believe them. But when Marry decided to pray and ask God to show her the truth, a thought came to her mind almost immediately—one day she would die, and then she’d go to heaven or to hell. Terrified that she might end up in hell, she began to cry out to God.

In her search for answers, Marry again went to the monk she’d talked to about Jesus. “How can I stay out of hell?” she asked, and, “What must I do to go to heaven?” The monk told her she must always do good. But Marry grew despondent…she knew she would never be good enough to save herself. “I knew in my heart I needed a savior.”

She continues through a translator:

So I felt compelled to give my heart to this Jesus who was calling me in my spirit, but my family rejected me; they physically and verbally abused me because of my faith, and soon they forced me to leave our home. I had nowhere to go, so I found the missionary who had witnessed to me and he sent me to a Bible school where I grew in my faith.

After almost four years my family started to talk to me again and I witnessed to them. When I graduated from Bible school my family also turned to Jesus, but the rest of my relatives [aunts and uncles, especially on her father’s side of the family] were very mean and angry that my family left Buddhism. So I realized I must pray for my entire family and, after five years, all of my relatives came to Jesus and now there is a church in my village.

At left, Sanda Htun with a member of our team; at right, both she and Marry with our team (minus Jeff, behind the camera, as usual) and one of our translators at lower left

By choosing a path contrary to the Buddhist culture around her, Marry is able to reach others who are searching for meaningful answers to life.

Marry also has a passion to help rescue those at-risk or already made victims of human trafficking and slavery in some very strategic areas. She is a good partner for us to link arms with and we are honored to have met her. Please pray for her ministry.

Marry lives in Taunggyi, the capital city of Shan, the largest state in Myanmar. This city sits on a mountain ridge about 5,000 feet above sea level

At a local market: “I’ll take two of those yummy rats and a pound of snails,” the woman at left seemed to be saying; at right, a vendor selling produce a bit more palatable to us Shan Noodles & Other Things
From the Front Lines of Yangon