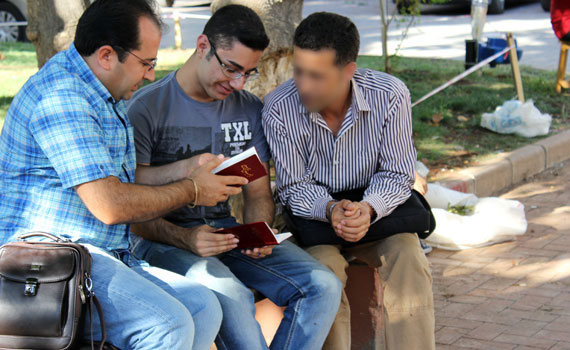 Two Iranian men happy to receive their own New Testaments

Through generous contributions to the Bibles for Believers Fund, we have purchased Bibles for believers in the Muslim State of Iran. I recently received the following account from our Iranian partner.

Morad, a Christian, sat waiting in a government office that issues licenses for cars. He noticed that a man sitting in the waiting area with him was a mullah (the term for an educated Muslim trained in religious law and doctrine, and who usually holds an official post). The wait had been long, and the mullah grew increasingly impatient. Unable to contain his frustration any longer, he blurted out loudly, “The people working in the office are in need of God’s forgiveness!” (Haven’t we all felt the urge to say something like that in such circumstances?) 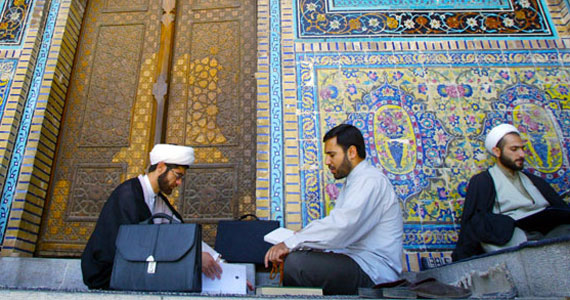 Seizing the opportunity, Morad asked the mullah about forgiveness. The mullah admitted that Muslims could never be sure their sins have been forgiven. Morad then shared what the Bible teaches about forgiveness. The mullah dismissed his words with a smoke screen of standard Muslim arguments, but Morad wisely replied, “I am not here to argue with you, I just want to share with you the wonderful truth about Jesus and how He truly is able to forgive sins.”

Morad then rushed out to his car to fetch a New Testament. “I’d like to give you this New Testament,” Morad told him upon his return. “Please read it. You can meet Christ and understand what He says about forgiveness,” he continued. The mullah respectfully accepted the New Testament, promising Morad that he’d read it.

I never found out whether the mullah received his car license that day, but I know he received something infinitely more precious—the Word of God.

Our partners have been giving New Testaments to hungry souls in Iran since 2005. More than 95% of recipients receive them with joy. And they’ve discovered that of those who read them, about 15% of those will give their hearts to Jesus.

Your gifts to the Bibles for Believers Fund are helping Iranians encounter the forgiveness they long for in Jesus Christ, resulting in a growing Iranian church. I thank you now, and one day those who came to Christ because of your gift of a Bible will thank you personally in heaven!