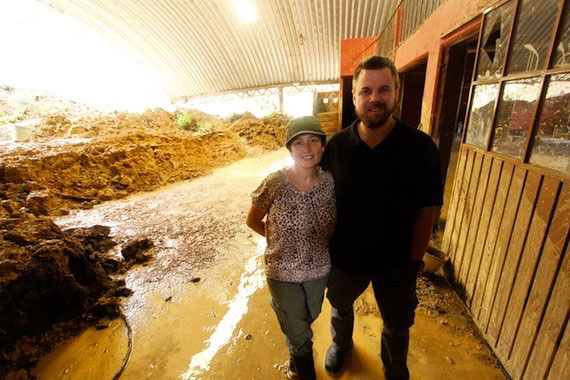 Missionaries Jason and Nicole Fitzpatrick standing in their ministry compound’s pavilion and cafeteria. The chest-deep wall of mud to their left extended to where they are standing, but progress is slowly being made to clean up after the disaster.

Greetings from Puebla State in Central Mexico, where Heaven’s Family has been partnered for years with amazing missionaries Jason and Nicole Fitzpatrick. I’ve been with them numerous times over those years, visiting the many churches they’ve planted among poor descendants of Mexico’s original Aztec people and meeting the “least of these” whom they serve. That includes orphans, sexually-exploited children whom they’ve rescued and raised, widows, the handicapped, and recovering drug addicts. Much of their ministry centers around a compound they’ve slowly constructed since 2008 which they’ve named “The Village,” built on land cut from a jungle mountainside.

Unfortunately, during torrential rains on August 6th, part of that mountainside gave way in the middle of the night. One major mudslide poured waist-deep mud into the Village pavilion and bent a pylon, and another mudslide left a dangerous ledge directly in front of a dorm walkway (see photos above and below).

At least 120 people in the region died as a result of the flooding and mudslides. None of the Villagers were hurt, however, due in part to Nicole evacuating everyone and leading them to safety in the middle of the night. They walked for two hours in the darkness and rain, adults and teens carrying the children, and praying for protection from mudslides, lightning, and downed electrical lines. (Jason was several hours away at the time in Mexico City.)

Since then, most of the Village children and adults have been living in cramped quarters in a large rented house in a nearby town.

Most of the children with some of their adult caretakers, at the new, temporary location 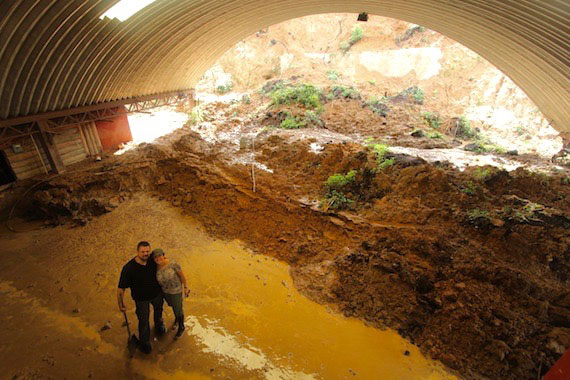 The question remains of whether or not the Village location can be made safe enough for habitation once again. As I surveyed the damage with Jason, Nicole and my son, Stephen (who directs our Orphan’s Tear Ministry), it appears that it could—via additional soil terracing coupled with replacing wooden dorms with concrete ones. Erring on the side of caution, however, Mexico’s Family and Child Protection Services will not allow the re-establishing of a home for children on the land.

So the current plan is to repair the damage and use the Village as a ministry headquarters, drug rehab, conference center, and fish farm, and to purchase property elsewhere that can be used to house the Village children and their caretakers. 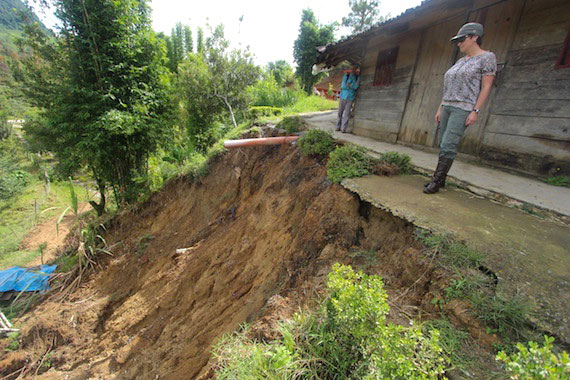 When the earth moves under your feet (almost): Nicole showed us where she watched upright trees disappear into the darkness as the land gave way.

In the meantime, Heaven’s Family has helped via our Disaster Relief Ministry with funds for a better kitchen and a dining area at the temporary rented house, part of which Jason and Nicole were already renting in order to safely house girls whom they’ve rescued from sex trafficking and sexual exploitation. More about that…in my next blog.