My Mom Was a Witchdoctor

My Mom Was a Witchdoctor 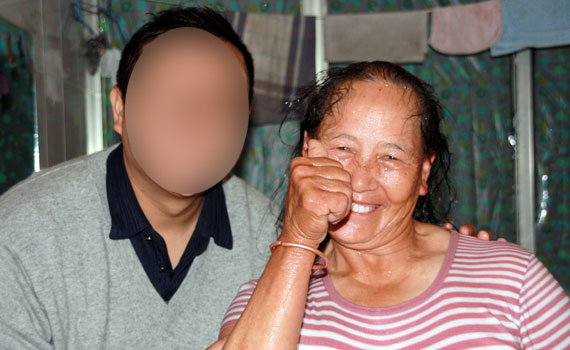 Pastor Paul rejoices that his mother gave her life to Christ

Pastor Paul Fang has baptized many believers in China, but none more important than the one he recently performed.

This new believer in Jesus was once an animist who worshiped spirits in trees, rocks and other objects, and practiced witchcraft and strange superstitions. She lived in deep darkness, regularly cursing her enemies, but lived under the continual curse of tormenting spirits. She spent all her life in poverty, and was even forced in her youth to build roads under Mao’s regime.

This woman is Pastor Fang’s mother, and I’m happy to report that she came to Christ as part of Pastor Paul’s work among his tribe, the A-Che people! She is now free from the fear that once bound her, and full of God’s Spirit instead. She now blesses her enemies rather than cursing them.

Choking back tears, Paul baptized his mother in the only “baptistry” available

China has over 200 distinct ethnic groups that have remained virtually untouched by the gospel, and the vast majority are poor (85% of unreached groups worldwide are poor). The A-Che tribe is one of them. Your prayers and financial partnership with the Unreached People Groups Fund have helped Paul Fang come to Christ and become a pastor to his own people. You’ve also helped rescue Mama Fang from a life of desperate darkness to a new life in the light of Christ.