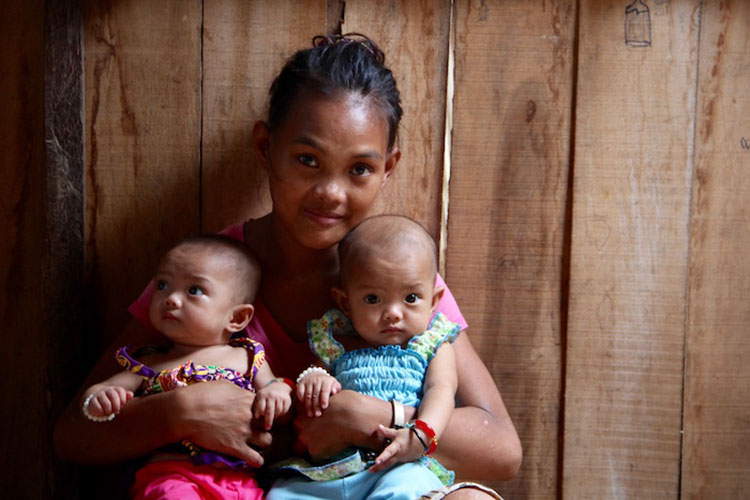 You can probably tell that these little people are twins, who live with their mother and father in a shack on stilts. Their shack will soon be razed to make way for urban development, and they’ll have to find a new place to live.

David’s 4th and Final Photo Blog from the Philippines

In my last blog, I told you the story of how American Joseph Zanetti began serving the Badjao people who live in a section of the Isla Verde slum on the Philippine coast of Davao City. It was the Badjao who first built their stilted huts, decades ago, over waters that were then teeming with tropical fish. But over the decades, many other ethnic groups started building stilted houses around them, and Isla Verde changed from an idyllic little community cluster to a crowded, crime-ridden slum suspended above an immense open sewer.

Today Isla Verde is spread over both coastal water and land, but even the huts built on land are perched on stilts in order to keep them above incoming tides, storm surges and floods. So there are actually two levels to the slum. One level is underneath the huts (only where there is land), and the other is elevated above both ground and water, connected by suspended wooden and bamboo walkways.

Here is a photo of the bottom/land level: 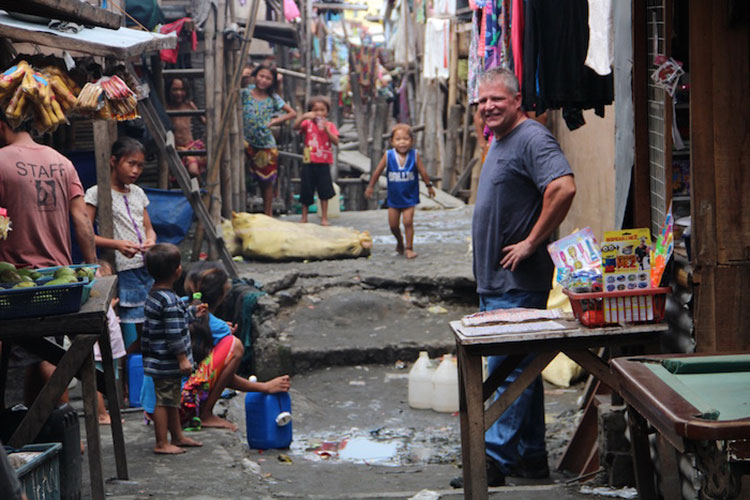 On the ground level you will find people who are working, sleeping, eating, sometimes gambling and drinking, and children playing, all underneath stilted shacks.

And here is a photo of the upper level, and in this case, where the houses sit above the coastal water that is covered with garbage: 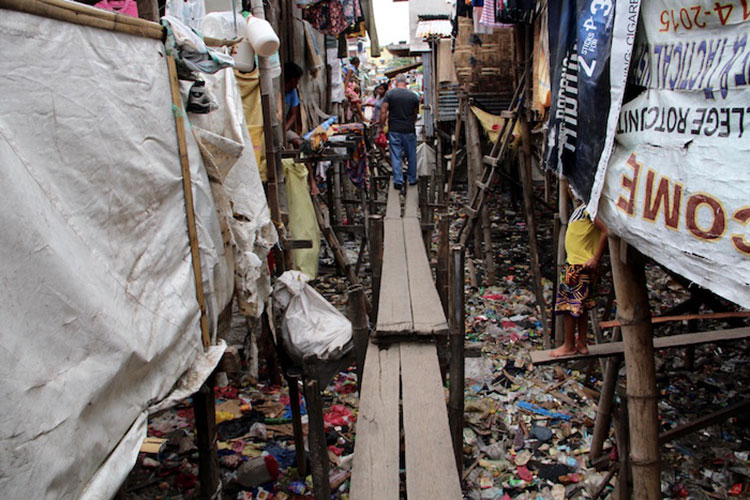 You don’t want to slip off the elevated boardwalks. Although the water isn’t deep, it is filthy. Surprisingly, the odor is not as bad as you might suspect (but it is bad).

It won’t be long, however, before the slums of Isla Verde will have vanished forever. The Philippine government has signed contracts with Chinese and Malaysian companies for a billion-dollar waterfront development. Here’s what Isla Verde will look like in a few years: 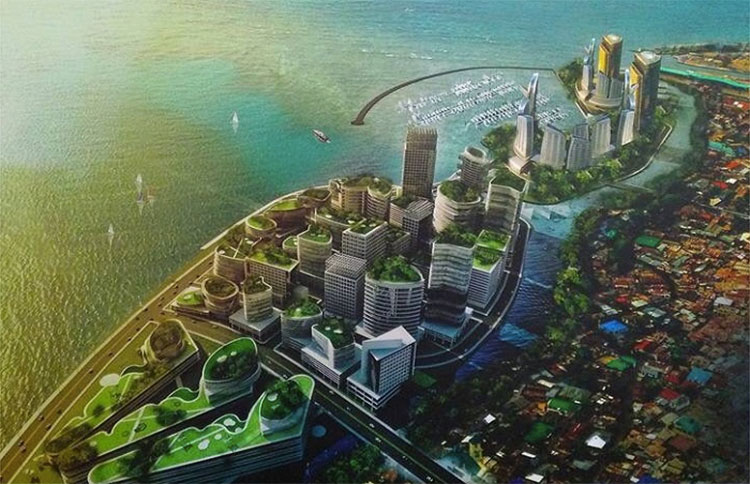 All of those high-rise buildings will sit on an artificial island. And can you see where the highway connects the mainland to the island? That is the part of Isla Verde where the Badjao people currently live. In less than a year, they’ll need to abandon their homes (although many residents of Isla Verde don’t believe it).

Most of the poor residents of Isla Verde are Philippine citizens, and as such, will receive compensation for their property or be provided with tenement housing away from the posh new development. The Badjao, however, are stateless people scattered among the coastal regions of Southeast Asia, and few even have birth certificates. So they will receive nothing when their stilted houses are razed. And the Badjao have historically made their living from the sea, and they still do today, so they can only live right on a coast.

Providentially, Joseph Zanetti has been given by a Filipino doctor a beautiful strip of undeveloped coastal land a few miles down the coast from Isla Verde, and he hopes to relocate to that land the 44 families of the Badjao clan that he has been serving for the past five years (all are related to Carmina, one of the 3 girls who helped Joseph find Jesus). Via an outrigger canoe, I visited that strip of land with Joseph, and the one thing that caught my attention was the clear water! (Although plenty of trash has washed up on the shore.) Here’s a photo: 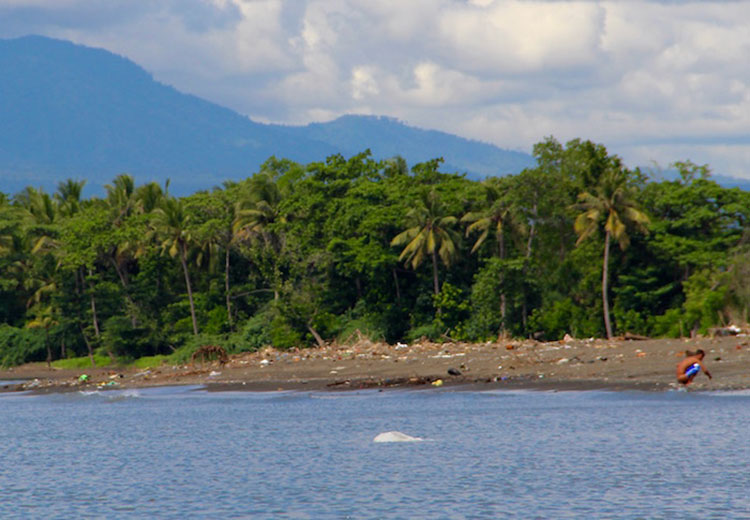 (Yes, the guy on the water’s edge is relieving himself. I didn’t crop him out of the photo only to illustrate what life is so often like for the world’s poor.)

The “Carmina Clan Development” will not only consist of 44 simple stilted houses built over shallow water, but also a public bathhouse/bathroom on land connected to a septic system. It will be a covenant community that will be self-governing and self-sustaining through fishing, handicraft production, and an Badjao Ethnic Center for tourists. The total cost will be about $20,000, with individual houses, built by the Badjao themselves, only costing about $250 each for all the materials. The Badjao are very non-materialistic, and they are quite content to live in very simple bamboo houses.

I’ve been discussing with Joseph the pros and cons of making housing loans, rather than housing grants, to each Badjao family. (Joseph has read When Helping Hurts, so he understands the pitfalls of handouts.) He is currently leaning towards either subsidized mortgages or a rent-to-own plan. But regardless of how the Carmina Clan Development is financed, Heaven’s Family would like to help. I’ve asked Joseph if he could ultimately send us photos of Badjao families standing in front of their new houses that I could send to everyone who helps us on this project.

Below are some more photos with captions from the last few days. Thanks for joining me on this Philippine journey! I’ll soon be home for Christmas! 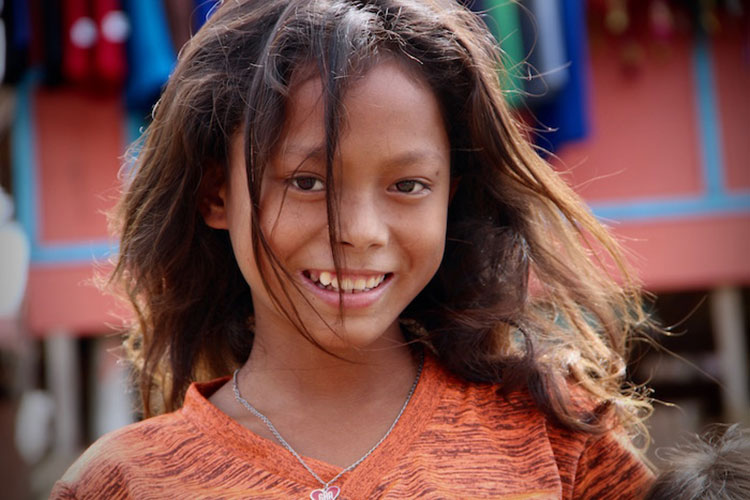 A Badjao girl who is very likely to be married at age 14 to a 16-year-old boy whom her parents arranged for her to marry years ago. Her parents will benefit at her marriage from the dowry paid to them by the groom’s family. A missionary pastor who has been living in Isla Verde for 25 years told me that divorce is very high among the Badjao who are not believers, but by the 3rd of 4th marriage, “usually things stabilize.” 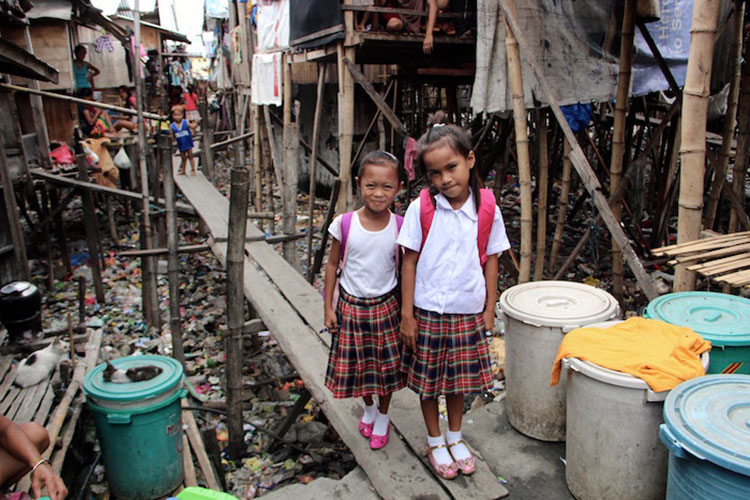 Government primary and secondary school are free for all Filipino children who have Filipino birth certificates, but parents are responsible to pay for school uniforms (like those being worn by the girls in this photo), shoes and school supplies. Most of the Isla Verde parents, however, are too poor to afford the minimal costs of those items, so their children never attend school, remaining illiterate.

Joseph has been able to get birth certificates for many of the children among the Badjao whom he serves, and he has sponsored 51 children (all in Carmina’s clan) to attend a government school right outside of Isla Verde. His hope is for all of those children to delay marriage, make it through high school, and that at least some might attend college.

Education solves the problem of children begging, early marriage, and early pregnancy, and can provide a way out of extreme poverty. If you are interested in sponsoring an Isla Verde child’s education plus some nutritional supplementation for $20 per month, please email me so I can put you in touch with Joseph. 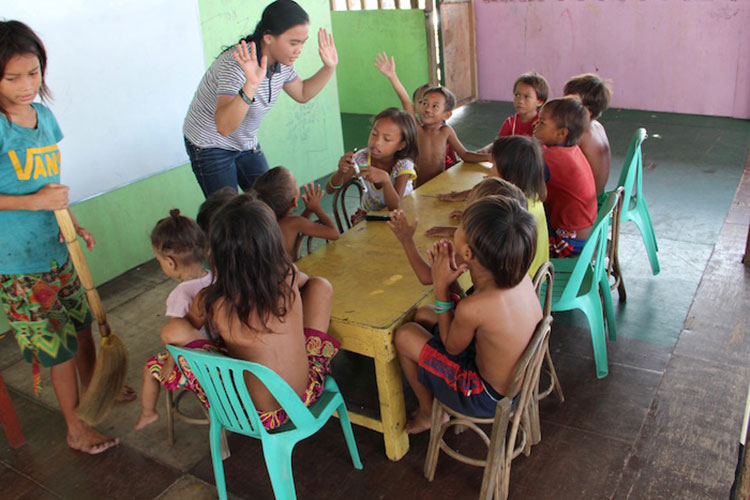 Joseph also administrates school classes right inside Isla Verde for children of very poor families and who are not associated with Carmina’s clan. The classes are taught by Davao City college students who are required to practice their new skills by volunteer teaching. The kids in this photo were a wild bunch, but they are not accustomed to adult supervision, as many of their parents leave Isla Verde very early in the morning to fulfill job responsibilities outside the slum, and they don’t return until nighttime. 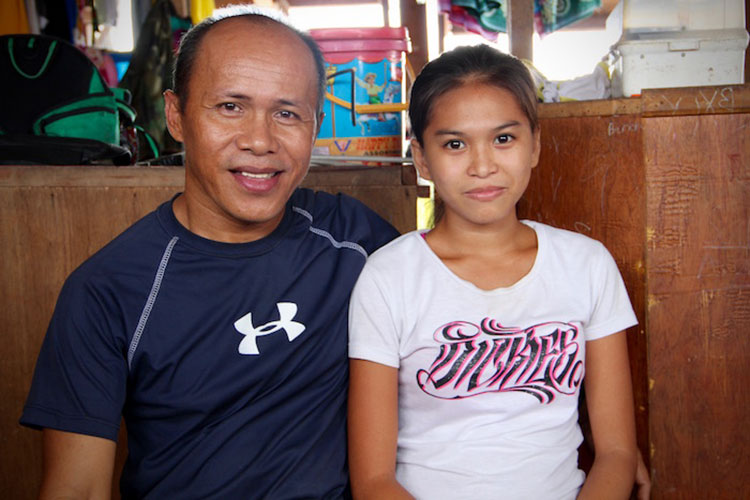 On the left is Pastor Bong, who has spent the last 25 years of his life serving the Badjao in Isla Verde. He pastors a Christian Missionary Alliance congregation of about 100 Badjao folks. (There are numerous Christian groups working in Isla Verde, which is one reason why Joseph focuses on one clan.)

Pastor Bong is a civil engineer by education, but faced a crisis as a young man that made him question if he was ready to die. When he subsequently came to the Lord, his dreams for success and wealth changed, and he discovered he possessed God-given desires to serve others. So he relocated to slum at Isla Verde and has lived there ever since.

On his left is his “adopted daughter” who has lived with him since she was 5 years old. 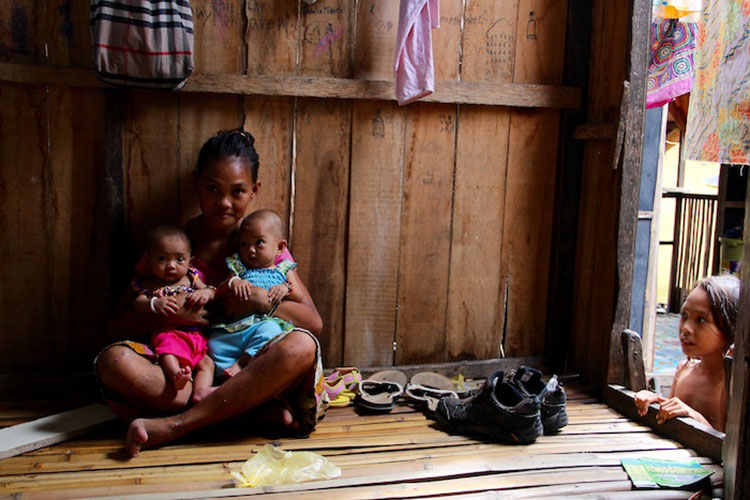 This morning we climbed the ladder of the the shack of one of Carmina’s 8 siblings, named Donita, age 17, who was married two years ago, and who recently gave birth to her twins, Ryzza and Aiza.

Carmina and Donita did have 9 siblings. Their parents could only afford to send one of them to school, so they sent a younger sister named Babina, who seemed to have the highest intellectual aptitude. She died, however, four years ago at age 12 of Dengue Fever (a mosquito-borne disease). 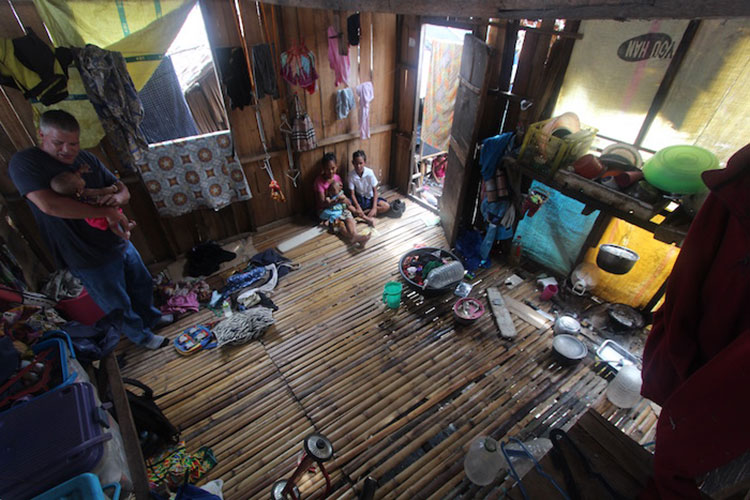 A view of the inside of Donita’s shack. There is virtually no furniture. The “kitchen” is on the right side of the photo. 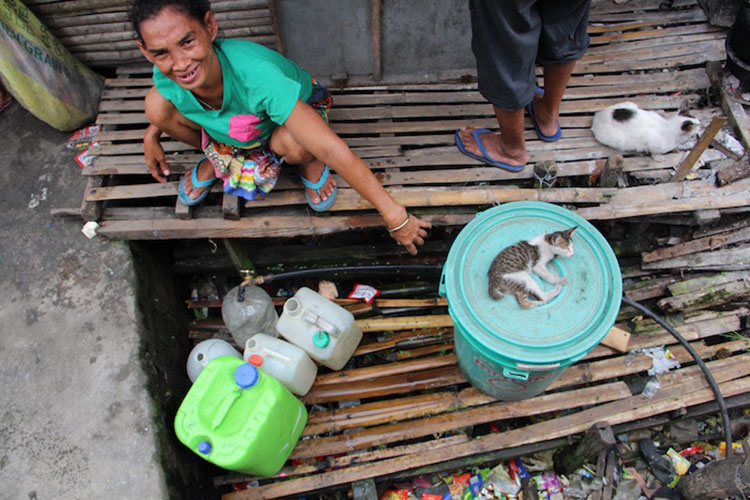 One of the 4 public faucets in the section of Isla Verde where 1,200 Badjao people reside 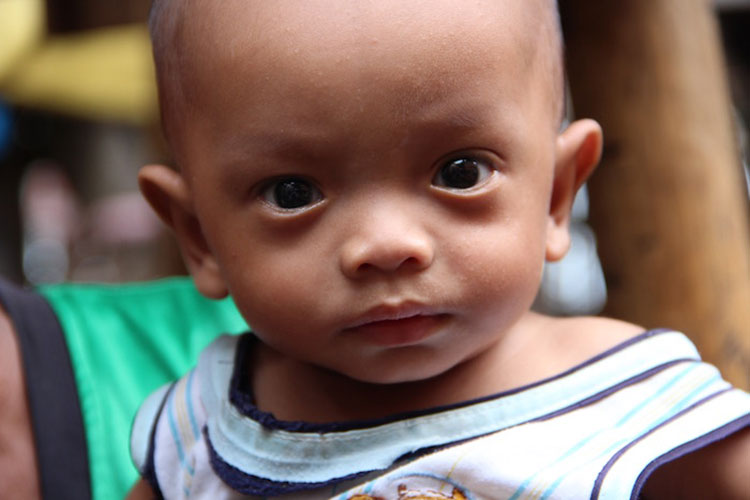 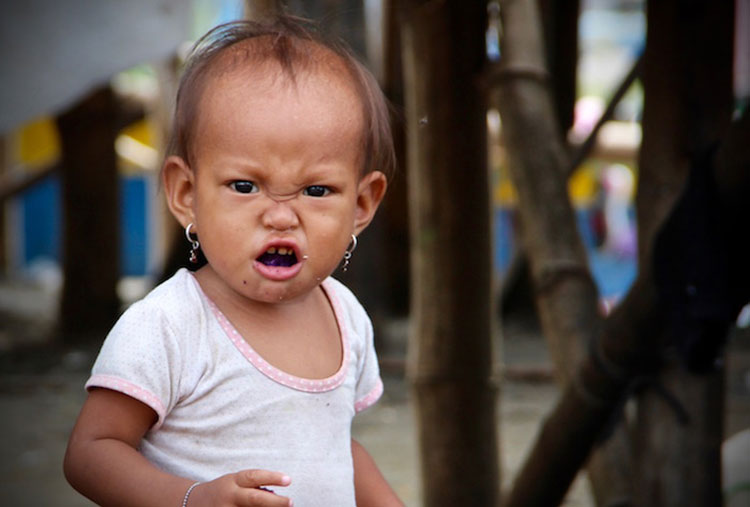 Not all of Jesus’ people were happy to see me…