The above photo was sent to us by Zam Cin Khual, the director of Mephibosheth Orphanage in Kalaymyo, Myanmar. Because of contributions to the Special Gifts Fund, we were able to send him $6,000 a few months ago to purchase a six-acre rice paddy and two buffaloes for plowing and threshing. Last year the price of rice tripled in Myanmar, and it has not declined since. So a rice field is a welcome gift to any orphanage. We’ve provided many rice fields for our orphanages and hope to provide many more for orphanages that are waiting.

Persecution Directed at an Orphanage Building

Last year when we were in Myanmar, pastor Hoi Cung, one of our orphanage directors, journeyed from Chin State (where foreigners are generally forbidden to travel) to tell me of recent government persecution that he and his orphanage of 80 children had been suffering.

Pastor Hoi Cung started his orphanage in 1999 with a license from the Myanmar federal government. In March of 2004, he constructed an orphanage building by liquidating all of his and his wife’s wealth. He did not get a building permit because his land was outside of any town or village, and building permits are never required for locations outside of towns. But on this technicality, late last year the Chin State government required that he demolish his orphanage building, taking him to court three times in October. When he refused, they threatened to demolish the building themselves. A rear view of Pastor Hoi’s orphanage building before demolition

So in November, with the help of his 80 orphans and sympathetic believers, pastor Hoi dismantled the orphanage building in order to at least salvage the lumber. Pastor Hoi gave me photos and video that document the demolition of the building. He believes that the primary motivation behind the Chin State government’s harassment is to force his 80 children into a Buddhist orphanage where they can be taught to follow Buddha rather than Christ. The orphanage building being dismantled

The children are now living in two locations, one of which is a temporary tent shelter constructed on pastor Hoi’s property. They took the bunk beds out of the orphanage building and lined them in two rows creating a center aisle, and covered them with tarps. A view of the interior of the shelter, created by lining up bunk beds beside each other

Pastor Hoi’s story apparently made it to the BBC and he was also interviewed by Radio Free Asia (he speaks excellent English), which embarrassed the Chin State officials. As a result, the authorities advised him to apply for a building permit, which they granted, in an attempt to exonerate themselves. But they are sure that pastor Hoi will not be able to reconstruct his orphanage building because of the financial burden (about $14,000 is needed). However, the authorities are dead wrong. In 10 days, we’ll be sending him $5,000 from the Special Gifts Fund to help him start building again! Praise God! 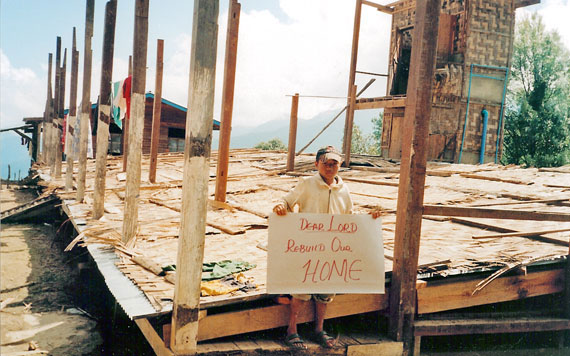 Where the orphanage building once stood. God is answering this cry through Orphan’s Tear!

And in May, also because of contributions to the Special Gifts Fund, we were able to send $5,000 to another orphanage, New Hope Children’s Home, also in Chin State, that has faced the identical problem with their orphanage building. God is bigger than the devil! And God’s people have more love than the devil’s people have hate!