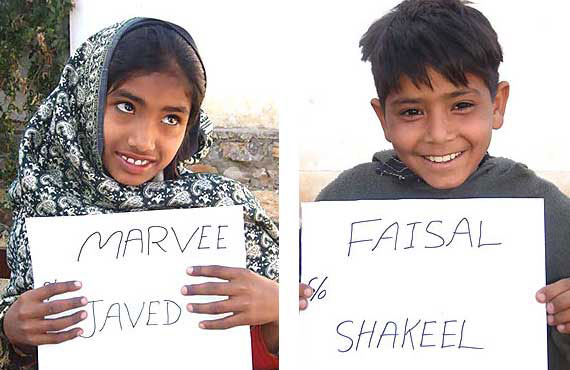 Two of sixty-six beautiful Pakistan orphans whose parents died in the October earthquake in northern Pakistan.

First, thanks to everyone who sent in gifts for the orphans this month, including regular child sponsors and those of you who gave special gifts to help the orphanages. After my last month’s Update I was so blessed that many of you graciously increased your monthly orphan sponsorship from $15 to $20. Praise God, and I can assure you that there will be a lot of rejoicing at the orphanages this coming month when they all receive increases that will make things better for the orphans.

There are other wonderful things that happened this month because of your love. I’m happy to report that it looks like we will be able to send $10,000 to the Handicapped Care Center in Myanmar that will enable them to purchase the building and land they need since they must move from their present rented house. The handicapped orphans are already pretty joyful, but this good news should start a party!

And it also looks as if we will also be able to send about $8,000 to our primary contact in Myanmar, who is constructing a medical clinic that will serve all the orphanages in his region, the majority of which Orphan’s Tear is supporting each month. For this we also thank God.

You most likely received my prayer request of a few days ago regarding Christ’s Family Orphanage in Pakistan—which was destroyed by Muslim rioters last week leaving the Pakistan orphans homeless. Praise God that all of the children were in school, and now they are living with Christian families! When I was in Pakistan a few weeks ago, I discussed with the orphanage director how much better it would be for the children to be raised in families rather than in an orphanage. He agreed, but said that the Christian families in Pakistan were so poor that none could afford to feed another mouth. I suggested that perhaps he could divide the orphan sponsorship gifts that we send to him each month among good Christian families in order to help them take care of one child per family. Now that this orphanage in Pakistan has suffered this violent attack by Muslim fanatics, that is exactly what he is going to do. And, praise God, one of our friends sent us $1,000 out of the blue to be used as needed, and so we sent that to the Pakistan orphans to replace the clothes, blankets and floor mattresses that were destroyed by the rioters. So all of the affected Pakistan orphans have what they need, and they are safe in Christian homes, albeit very poor homes.

There is much more to tell, but I try to keep these Updates from going to long. But thanks again for laying up some treasures in heaven by loving some of Jesus’ little followers! Remember to thank the Lord for Christian brothers and sisters who are willing to put their own lives in jeopardy in order to love and rescue abandoned Pakistan orphans.